Part of Alice Cobb‘s responsibilities at Pine Mountain Settlement School was to do fund-raising and to maintain relationships with the many donors to the School. There were several women’s sororities who were long-time supporters of the School. Delta Sigma was one of those. In this letter to “Delta-Sigmas,” written sometime in the early 1930s, Alice reports on the School but she also felt compelled to write a description of an event and a conversation with one of the men in the neighborhood, Abner Boggs, following the death of his wife.

At Pine Mountain, we learn to be prepared for sad, sometimes tragic and shocking experiences. But even so, we are always shocked and saddened when they come. I should like to be telling you of how our second semester started off with every single boy [and girl] returning after the vacation, with a fine evening program running like clockwork; of the grand preparations made for the presentations of Pinafore, which is actually coming off on Saturday night, and of how the measles came and swept the ranks leaving us gasping, but unhurt; of how we look joyously to spring, having passed through the period of the February slump much too busy to have time for a slump. That is the news of the school.

But out in our little settlement community down Greasy [Creek] way, there is another story to tell. This winter seems to have been one catastrophe after another. I may have told you about the trouble between Dora and Tabitha Metcalf, Dora’s stroke of appendicitis, Becky Boggs‘s difficulty with the postal inspector, and the murder of Little Bill Turner on Christmas Day. And only last week one of our most friendly neighbors, Mrs. Abner Boggs, died leaving a whole family of little children behind her. 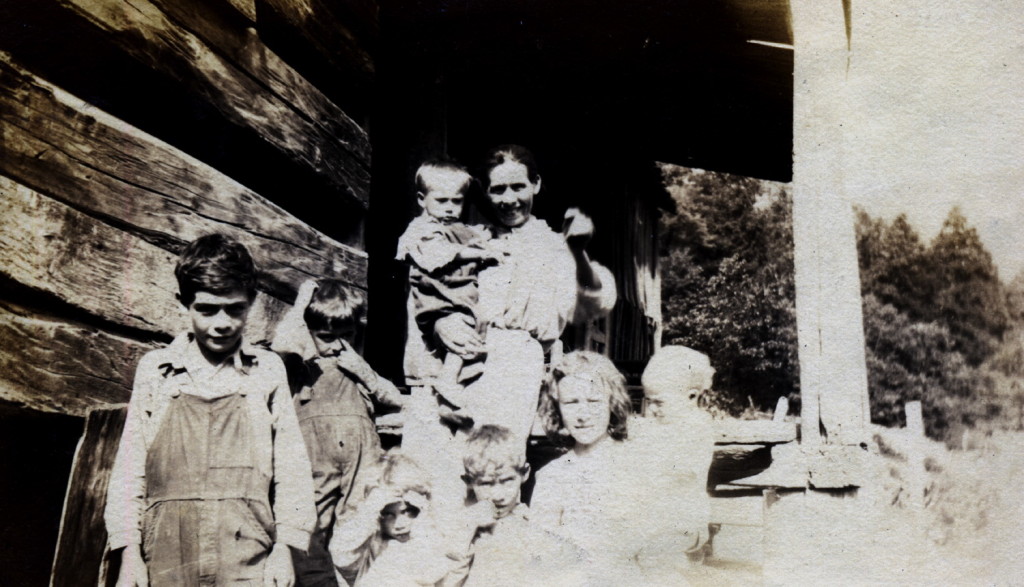 I think I have written about Abner Boggs who won the prize at the Fair Day ballad singing last fall. After that day I “went a-traipsing” down the creek time after time to get Abner to sing to me. And I wish I could tell you the whole rare story of some of those Sunday afternoons I spent with a shorthand pad and pencil literally taking down every word for it was all flavored with the richest sense of humor, the saltiest manner of speaking, poetic too, and all sprinkled with lovely figures and scriptural quotations. And the results of these most entertaining visits was that we all became very much interested in the talkative little bald-headed man, who always leaned on his stick and peered up [from] under his tattered hat with sharp and merry black eyes, as he chattered on. And we became very fond of his pleasant “little woman” and the eight “singinest” children on Greasy.

Last Wednesday that pleasant little woman died very suddenly of heart trouble. The school truck went out and brought her the next morning to be buried in the little graveyard on the hill near our grounds. I went out there and walked back from the burying ground with Artie, the oldest girl, who will now be the mother of the “little-uns” — poor Artie, just a few years past that stage herself! It was a sad little procession that trudged down the road from the graveyard on that chilly gray afternoon. I asked Artie to stop by at the school to get warm — it was so cold, and her poor hands were almost blue. But she shook her head and said brokenly, “No’m — thanks — I’ll go home — with the boys —.” Our last glimpse was of them all trudging on slowly, down the road and around the hill toward Big Laurel.

Yesterday morning Abner came to the office to ask about getting some sandstone slabs on the mountain to make into headstones. I would hardly have known him — the flourish, the gayety all gone. He sat with his hands over his eyes as he talked, to hide the tears that trickled through his fingers — talked with difficulty at first and then told the whole story slowly, painstakingly, and very simply.

“Twenty-four years, eight months and seventeen days did we live in the bonds of holy matrimony. As the Good Book says ‘thou shalt cleave to one man and him only shalt thou love.’ I won’t go so far as to say there warn’t never no short words. There is no human bein’ could live for twenty-four years in perfect accord. But we ain’t never fit none.

“Many’s a time I’ve heard her say, ‘May the Lord help me to die suddent’ without the pain and grief o’ a long spell o’ sickness’ and I know there warn’t no more than half an hour o’ sufferin’ for her. ‘The prayers o’ the righteous availeth much!’ And for that I am glad.

“I never let her work like the next man. After our first child was borned I wouldn’t never let her work out in the field till the eldest ware big enough to keer for the least-uns. And then she never come out till ten of the morning, and never worked till dark at no time. For that I am glad.

“I ain’t worried about her soul. She never had no ill-will against no one. There were no hardness in her heart and all that ever had dealings with her spoke heartily well of her. For that I rejoice.

“But for the children she leaves lonelisome, and for me that is broke forever, I grieve. I cain’t never sing no more — cain’t work none. My life is ended and I shall live a single man, for the short time left to me, a-grieving and a-lamenting.”

I have of course no way of measuring Abner’s sincerity, but somehow I felt as though I’d heard a new psalm just composed. That was all — but so you wonder that I must save up school news for another time, and tell you now of Abner Boggs? We are trying to care for the “little-uns.” Of course we haven’t the wherewithal to do much. Perhaps we shall have to call for outside help. But here certainly is another burden which we must broaden our shoulders to bear.

My kindest greetings to everyone of you.

In 1937 Alan and Elizabeth Lomax came to Pine Mountain to collect ballads and music from the region. This ballad, “The Orphan” by Abner Boggs, captured his continuing grief at the loss of his wife of 24 years. The recording is part of the Lomax collections in the Folk Life Center of the Library of Congress.

[*Note: the quality of the recording is very poor. To listen to the recording on the Alan Lomax KY Recordings page which is better in quality.]