CHRISTMAS AT PMSS The Beginning

Just a year out from the founding of the School, the Settlement workers began to build into the annual events a series of Christmas traditions that stayed with  PMSS through most of its early history and many have persisted beyond. The annual Nativity Play is one event that has only rarely [during war-time] not been observed.

Dear Mother, Father & Jeannette — I thought I would be able to write you before this but honestly, the only letter I have written before today was to Ethel and that was on account of the Victrola. I certainly was pleased with my coat, mother, and with my book, Jeannette. As far as I could make out from mother’s letter father was giving me the balance for my liberty loan, but it sounded too good to be true. Is that right? It certainly would be fine! My coat is wonderfully warm — everyone is wild over it. Of course, I wore it Christmas Day. About one o’clock we had quite a snow storm. I sported my new coat and went up to see Aunt Sal and Delia [Creech]. Delia is so pleased with her dishes. They came Saturday. She was having the nicest time that afternoon with the three children. They had a little tree. All the children had hung up their stockings too.

Christmas was lovely from beginning to end and I guess you will want to hear it all. All week long we made wreaths and every night the children danced and sang songs around the tree, each night lighting three candles and every child putting a pretty on the tree. Saturday afternoon we had a working to decorate the dining room, Miss de L[ong], [Angela] Melville, [Edith] Canterbury, [Elizabeth] Shipley and I. Really the room was a picture with wreaths at every window, door and over fireplace, great hemlock trees banked in every corner and around balcony pillars and tiny ones on all the tables with just a little tinsel and a red Santa on top. That night we had candles on all the tables and three little ones on the tree by fire. It looked like a fairyland. Soon after everyone was seated  –my eight little girls, all in white with red hair ribbons, sang an old carol “The Ivy and the Holly,” hanging the ivy, which we call laurel, from the balcony. Becky May and Maudie were so happy and excited they were radiant! After supper we sang carols for a long time. Miss Pettit had a Xmas party for everyone that night but I was too tired to go.

Sunday evening every [house] family took their tree [Christmas Tree] around to our old neighbors — Far House to Uncle John the Fiddler, Old Log to Uncle Dan Creech, Big Log to Aunt Sal and one to Aunt Sis. When we got to the gate we lighted it [the tree], going in singing “Here We Come Wassailing” She was as pleased as could be. Everyone crowded into little back room, … tree in the center on a chair, and we sang all the carols. She wanted us to sing some again. We had only three candles on it and she said “Hit pears like a little tree suits our family best and the three candles for the three of us.” We named the candles, she and Uncle John [candles] went out at the same time and it pleased her so. We took down several gifts for them, some useful, some toys — a doll and a scrapbook for Aunt Sis. You have no idea how they all love dolls. 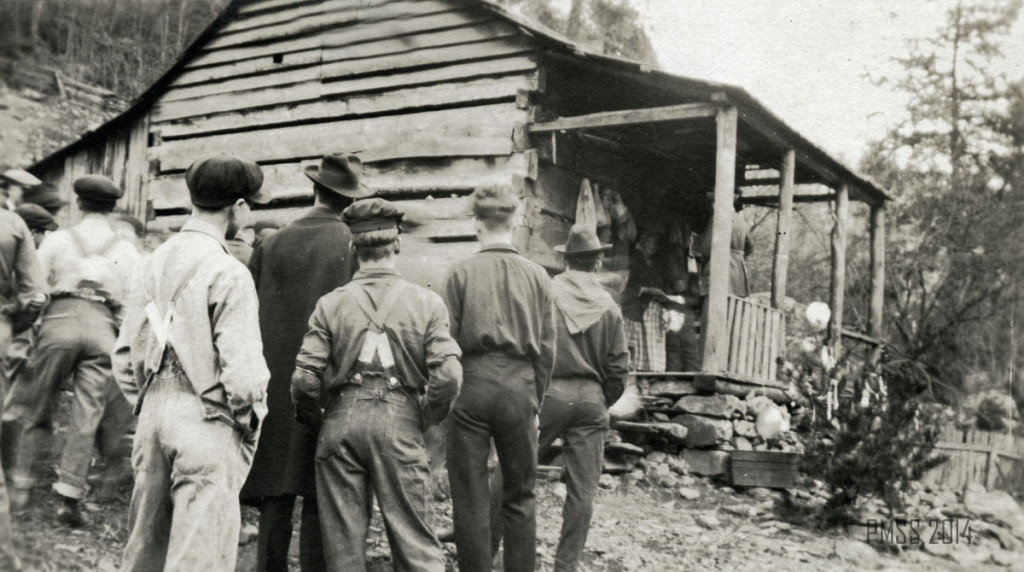 “Taking Christmas to the Community.” [christmas_983-.jpg.jpg]

Monday was the busiest day. Willie and I assorted [sic] out all the Christmas gifts. Every box was taken to school house and there we arranged everything according to ages and as fair as we could distribute the gifts. It was lots of fun but work too!

Christmas Eve supper was the very nicest of all. Again we had all candles and Clarkie’s little red chimneys at every place. In center of the dining room was a table set for 12, quite apart from all other tables. Twelve small children acted out “Here We Come Wassailing,” Green Bailey [Gross] with white beard the man of the house, Linda in long skirts and shawl and cap the lady, J_[Jeems ?] and Luther the servants, Lillie and Bessie Mary the cooks in little white caps and aprons. Probably Father and Jeannette will remember some of these children. In came the other six children singing, waving hemlock branches and dancing all around the tables, finally coming to the man and lady of the house who were sitting in big easy chairs. They invited the children to eat. It was dear and the children just so unconscious that it was most real. This was a surprise.

Green Bailey [Gross] had the time of his life toasting the marshmallows which Clarkie had in the chimneys, by candle flame. After supper while we were singing carols Santa’s bells were heard. The children immediately were all ready to run. (Sunday night when at supper his bells were heard Coldona was so frightened she shook.) In came Santa (Mr. Callahan) with a pack on his back bringing his little boy, Willie, (Wilmen Stoere). Last year Santa told them he had a little boy Willie so William Gross, Green Bailey’s brother, wrote asking that Santa not bring him a thing but please bring his little boy Willie. They were so delighted they shrieked and clapped. Jeems threw his arms around Willie saying “God bless you, Willie Santa”. Santa gave everyone a big apple.

Of course that night we had to light the tree, hang up our stockings and sing some more. By the time we filled cornucopias for everyone, took them around to all the houses, also apples and oranges, filled our stockings it was way past midnight. It was after one when I got to bed, to be awakened before four by Miss de L[ong] and the boys singing carols. When they got back to Laurel House at five after making the tour of all houses and to Aunt Sal‘s, the bell was rung and everyone went out on their porches, all wrapped up in big coats. Of course it was pitch black and just as quiet. The Far House sang “Hark, the Herald Angels Sing” — then we answered . We went to other porch toward Big Log House, sang it again, and Big Log answered us. It was so pretty. Everyone flew to dress and it didn’t take long. Such excitement with the stockings. Miss de L[ong] and I had everything that would make noise on the breakfast tables, horns, whistles, etc. Never did you hear such noise or see such happy children. Many of them brought their dolls and sat them on the table. Cam came over to show his which Gary had named “Queen Elizabeth.”

At 10:30 there was the community tree in House in Woods and a pageant by all the children acting out the Xmas story [earliest Nativity Play written by Ethel de Long]. Maudie was Mary. It was so simple, lovely and impressive. Miss de Long had simple service before the pageant and after it Santa came giving candy to everyone and balloons to be blown up–all colors. It was cold and rainy so people didn’t stay long. At noon every family had bread and milk at its own house for our dinner was at four. In the playroom top floor of school house the big ones played games all afternoon. Christmas night was quiet — it was peaceful to have it so. I thought of you many times wondering what you were doing about dinner and if Father stood the hard work. I’ll be anxious to hear.

Many of the children are gone and most of the workers. By tomorrow there will be only twenty in our family — all will be back next Wednesday. Miss Gaines and I thought we would have time to do extra things, but so far “no rest for the wicked.”

Back to: GUIDE TO CHRISTMAS AT PINE MOUNTAIN