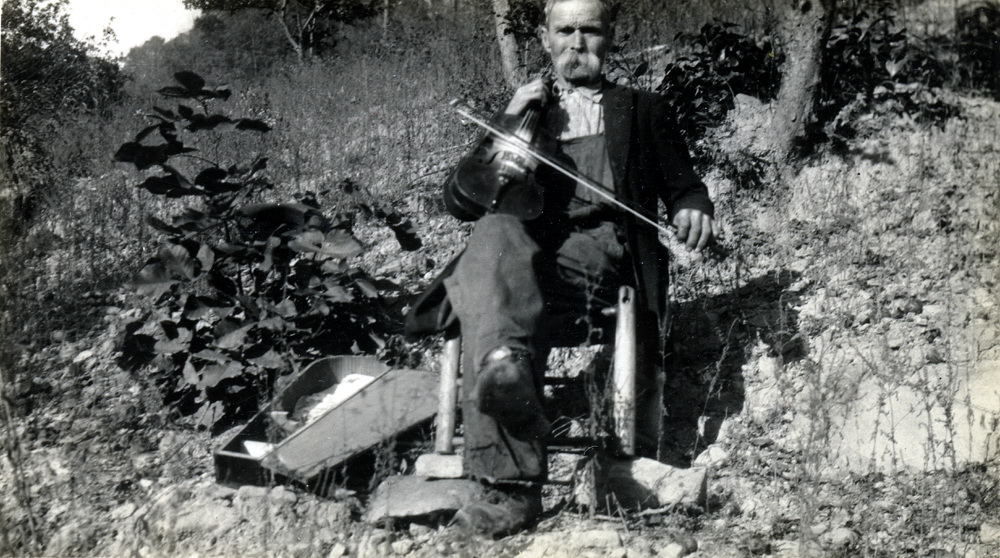 Stories of Fiddler John Lewis abound in the early letters of workers at the School. He and his wife, Louize, enjoyed the visits from the School workers and both were never short of a story, many of which were captured and recorded, as in this account by Ethel de Long, printed in the November 1920 issue of Notes from the Pine Mountain Settlement School, Volume 1 Number 5.

WE are fortunate in having as one of our nearest neighbors a delightful talker, a philosopher, and a fiddler all in one. What a gift of phrasing he has! When Mrs. Holton, then Miss [Celia] Cathcart, began her solicitations for the road, he characterized her thus: “She’s a long-minded woman; she can see way yander ahead of her.” Fully in sympathy with the road project, he said to her: “Why, yes, I’ll help ye. I believe in the road. I allus have a leetle chinkapin money in my pocket, an’ I hain’t no hog with hit, nuther; I’ll give ye a nickel for it!” It was as generous a nickel as was the widow’s mite of Bible times. Our nurse was “a diadem among them that follered carin’ for the sick; she’d take you when you were plumb disencouraged and hearten you up again.” How many delightful ways he has of describing his wife’s [Aunt Louize] health to an inquiring listener: 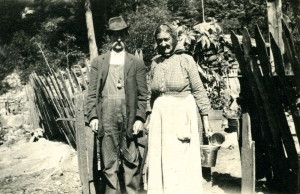 In his younger days he always had a fiddle, but for fifteen years he went without one. Now again he has his violin—has been offered twenty dollars and fifty cents for it many times, but wouldn’t take fifty for it! He used to wrap it in an old kerchief of his wife’s and come up to play for us, his favorite tune being the march Napoleon played “when he led his troops over the Rocky Mountains,” a close second being one that General Grant used to play when he led his forces against the enemy. It troubled the dear old fiddler that he had no case to protect his violin. “I need to shade her from the a’r. Did you ever hear a fiddle like this? Why, hit’s the clearest, melodious’est, loudest-ringin’est one that ever I heerd.” And then followed his philosophy of music: “I take my fiddle when things are botherin’ me, maybe the financial matters of the world, an’ I sit down, an’ play me a tune, an’ that leads to another, and, don’t you know, I feel better. Or when the aggravations gethers round about me, or I get mad, I can set down an’ play, an’ pretty soon the aggravations is plumb driv’ away. But I want a case for her.” An order went to New York for a fiddle case for our fiddler, but the order was arrested, and back came a case that Signor Adolf Betti of the Flonzaley Quartet* had no use for any more, along with a delightful note that the great violinist hoped to come down and play with our fiddler some day. “Don’t you know, hit’s a sight how much better she rings since I got her that case,” says he. “I’d never take nothin’ for hit; hit belonged to the boss-fiddler of the world!”

Our neighbor can do justice himself to the power of music, but for a long time he has wanted to find some one to write an adequate book on the theme, “The Power of Steam and the Mind of Man.” For these great forces he felt he had neither knowledge nor language. Many and many a time has he come and given us all the illustrations he knew of both these themes. But his quest for a book-writer has been as vain as that of Diogenes for his honest man. Now the pleading always ends this way:

“Get me somebody to write a poem that I can make a tune to, an’ then make him write a book, an’ when hit’s printed, why I’ll—I’ll buy one!”

In fact, Sally Loomis, a teacher, fresh from Wellesley College, who came to teach at Little Laurel school did write a poem that reads like a ballad. It is a narrative about Aunt Louize and Fiddler John that has all the drama, fatalism, and sorrowful endings found in the best of the mountain ballads. (See: Sarah Marcia (“Sally”) Loomis biography.) 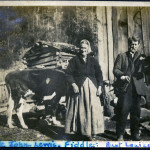 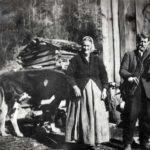 [* Adolfo Betti (1873-1950) was the first violinist and director of the Flonzaley String Quartet from 1903 until the quartet dissolved in 1929. He was from Bagni di Lucca, Italy. A student of Cesar Thomson, he completed his music training In 1896 as a graduate of the Liège Conservatory. Following the dissolution of the Flonzaley quartet, he taught music at Mannes College, New York, NY, and then returned to Bagni di Lucca where he died in 1950.]