Dora and Mabel Sidelinger were mother and daughter who worked at Pine Mountain Settlement School in the 1920s, but not at the same time. The interesting side of their tenures is that Dora came to the School soon after her daughter Mabel left for a position elsewhere.

Mabel Sidelinger had applied to teach the first and second grades at Pine Mountain for the school term of August through May of 1920-1921 and again the following school year, 1921-1922.

Hired by Ethel de Long, Mabel was the first to discover Pine Mountain and, in 1921, apparently encouraged her mother to follow her to take the industrial training job at Country Cottage. Dora seemed pleased with the descriptions of the School but did not come until 1923, apparently after the death of her husband.

When Mabel recommended her mother for the Country Cottage position, Ethel de Long Zande liked what she saw in the possibilities of the two family members on campus and sent the following letter [images 002-003]:

I have been talking with your daughter about a possibility here for next year and she thinks that you may be interested in the suggestion I have to make.

Perhaps you know about the little Model Home, which was built this year, where two girls live and get all their experience in home making that can be gotten, through learning the daily routine of a little house. They get their own meals usually, and while the arrangements of the house are just as simple as we can make them, and in conformity with the custom of this country, we have done everything we could to make this easy and to show people how with very few resources work could be lightened or done better.

The house sits on about half an acre of land, and we are very anxiously to have a garden in connection with it. We could not do this, this year, partly because the girl who has been living in the area was leaving us the first of May, and partly because anyway, she did not know about making a garden.

I have thought it would be splendid if you could down, who know of running a place, and help these girls and get this piece of untamed land in order so that another year there would be a garden. I think you would not find this an over-heavy piece of work. The place has four rooms, — living room, kitchen, worker’s bedroom and girl’s bedroom. There will be running water in it, and your family will never be more than two besides yourself. It is the sort of place that needs somebody to live in it and love it, and we shall be happy if you want to make it a place the neighbors like to come to.

I have also thought you might find time to, occasionally, as your own enterprise, bake up bread, rolls or pie, which the workers here would love to buy from you. They are so appreciative of home cooking, which is a little different from that served by the school, and I have often wished I had time myself to make raisin bread, or Parker House rolls and sell them. There is nothing obligatory about this, it is simply a suggestion that may interest you.

Of course, we cannot offer big salaries here as you know, and for this special branch of the work there is no support, but I thought if we offered you your living and twenty-five dollars a month that would cover your traveling expenses and the simple essentials you might need here. Would you consider it?

We are so in hopes that you and your daughter will both be with us next year. She had done a splendid piece of work and we value her very highly. We should be most loath to lose her.

In a letter dated May 10, 1923 [image 008], Mrs. Sidelinger accepted, stating that she had obligations to care for her mother but that her mother was quite independent and she was interested.

I think that I would enjoy the place, and hope the garden may be started this Spring so that we can have some use of it in the Autumn. Thanking you for your kindness to Mabel and myself, I will leave the matter with the Great Ruler.

The Great Ruler apparently approved and Dora arranged to come to the School for the year of 1923-1924 to supervise the model home known as Country Cottage, Pine Mountain’s industrial training house.

The Country Cottage model home was created in 1920, as described by Evelyn Wells in her history of the School:

The ‘Model Home’ was started this week (later Country Cottage). It’s a tiny plank cottage, to be papered with newspapers, etc., and furnished as simply as a mountain home, where the domestic science teacher will live with a couple of girls and keep pigs, chickens, and a cow. Garden too, of course. Money ($1,000) given by the Southern Industrial Education Association in New York.

Several industrial trainers had managed the home before Dora Sidelinger was brought to the School in the autumn of 1923. She would remain for one year.

Dora was born Eldora M. Hall in April 1857 in Maine and married Alverado Sidelinger in c. 1886, who was a machinist and also born in Maine. Their daughter, Mabel Sidelinger, was born in 1891. The 1900 U.S. Census shows the family living in Lynn City, Essex County, Maine, in the census year. However, the death of Alverado Valenza Sidelinger in 1923 resulted in a substantial change in the family structure just before Dora reached Pine Mountain Settlement in 1923. Dora had to become the sole provider for her daughter and for her elderly mother.

Your daughter is being a great help now. I don’t know what I should do without her.

Mrs. Dora Sidelinger departed Pine Mountain at the end of the school year in 1924, possibly to continue caring for her mother.

Ethel de Long Zande continued correspondence with Dora and Mabel Sidelinger after they left the School. She wrote In a June 24, 1924, letter [image 005] to Mabel:

We are living just the same kind of life that you have seen here at this time, — gathering strawberries and shingling Laurel House and gardening. There are some lovely blossoms now. Tell your mother the Model Home garden is looking so nice. Essie Begley keeps it hoed beautifully. …

…Mrs. Sidelinger, you would be perfectly delighted to know how nice the Model Home garden is. A couple of our summer workers have been putting up beets and carrots, twenty-five jars altogether, and I believe we will let the rest mature in the ground. The yard looks so pretty, and the top is on the chimney.

The cow is giving about eight pounds of milk at a milking, and that is very good, isn’t it? Miss Fanny likes her so much but she says the other cows are quite mean to her, for they have discovered that she won’t fight, and evidently she gets a good deal of Miss Fanny’s personal attention!

The things you planted along the path, Mrs. Sidelinger, are doing well. Only two bushes of rhododendron have died, which is a remarkably light percentage, and I shall have those replaced in November. The ones along the side of the house are as pretty as they can be…” 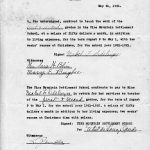 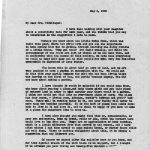 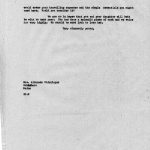 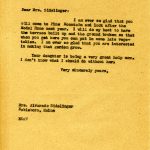 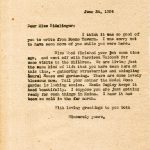 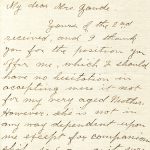 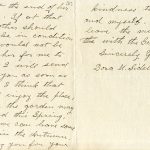 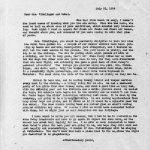