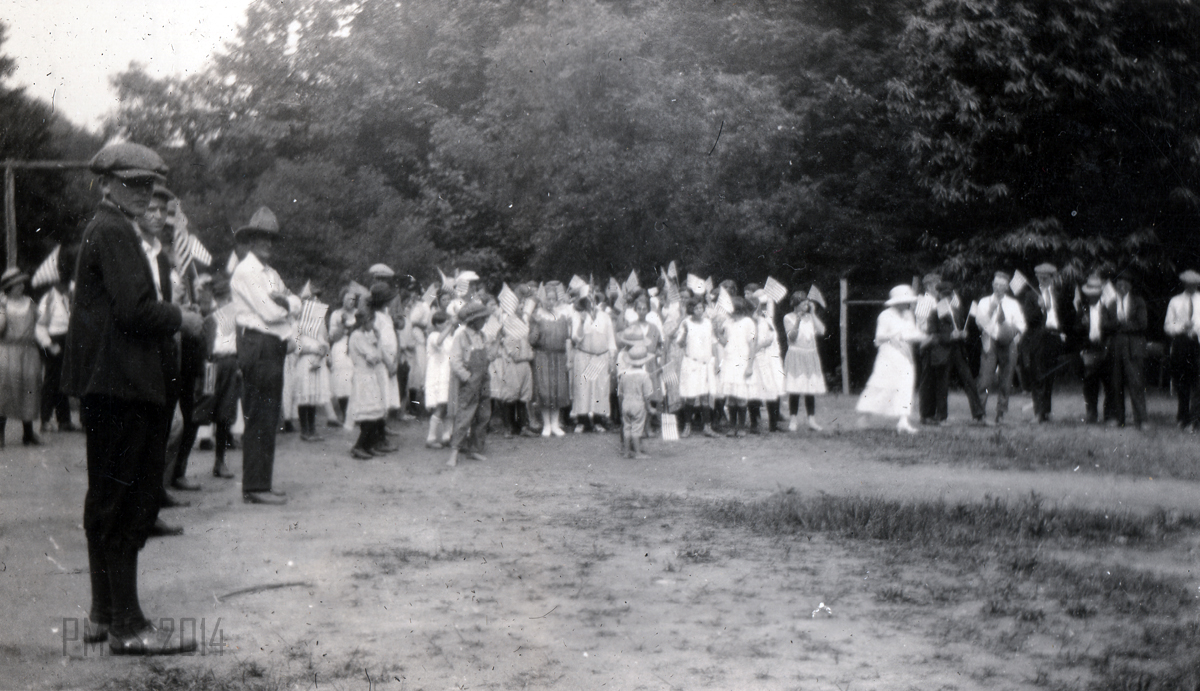 A celebration of the Fourth of July commenced on the very first year of the Pine Mountain Settlement School, as reported by Katherine Pettit to the Board of Trustees on August 4, 1913.

The Fourth of July celebration attended by a good many people who did not realize what the day meant. Someone said they did not know there were so many boys and in the mountains as they saw that day.  Some of them including women and babies rode twelve or fifteen miles [to come to the celebration].

In 1914 this Fourth of July photograph taken by Philip Roettinger, a member of the Board of Trustees at Pine Mountain, captures staff and community members in their best summer attire. With the constant encouragement of Katherine Pettit, the Co-Director, all things related to the founding of the country were memorialized in celebration, in the classroom and in her own associations at Pine Mountain Settlement School. 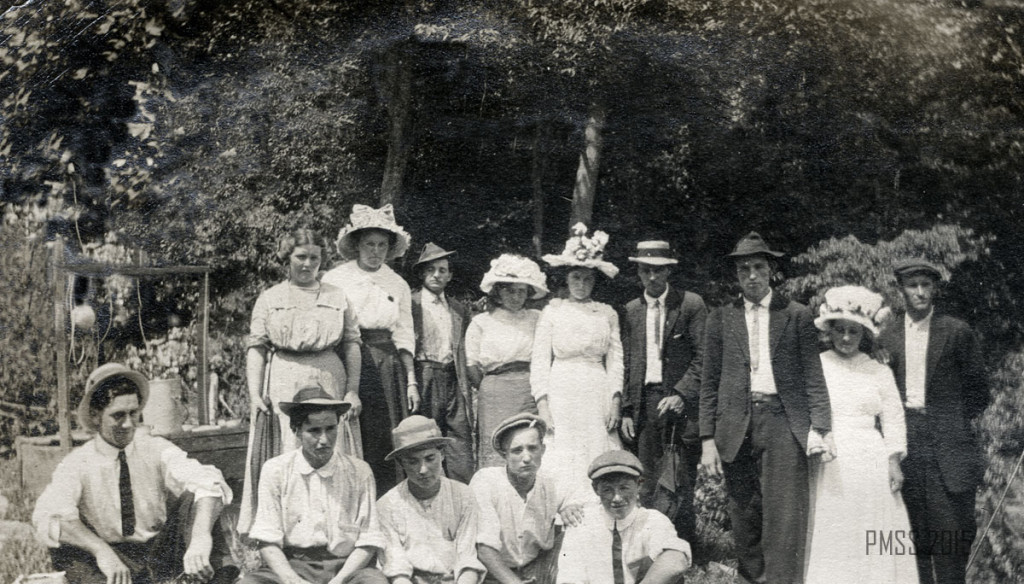 0036a P. Roettinger Album. “Fourth of July 1914.” [14 men and women standing outside: Nine standing in back, four men and one woman in front.  Person in middle front holding American flag?]

By 1919 Ethel de Long Zande  Co-Director, writes to donor, Stuart M. Buck that the idea of a “Fouth of July” had caught on

” We have had a most interesting gathering on the Fourth of July. There must have been close upon two hundred people who traveled up and down creek for the sake of a day’s recreation at the school.”

Pettit was particularly conscientious with regard to Independence Day.  Her long association with the Daughters of the American Revolution and the Mayflower Society, gave the day special significance for her and she made sure that the community was reminded of their historic beginnings and independence as a new nation.

Its [Pine Mountain Settlement School’s] papers of incorporation give the School entire freedom in this large field of rural service. The Board of Trustees, an independent organization composed of men and women in different parts of the country, desires the School to co-operate in every way with the community, to help solve the problem of wholesome social diversions and to share in the religious life of the community by Sunday School work and non-sectarian Christian association. So it is that on all the great days of the year the School’s grounds are the gathering place for the people of the surrounding country. There is the Community Christmas Tree, the Fourth of July Celebration, the Community Fair, and the weekly parties for the young people of the neighborhood. 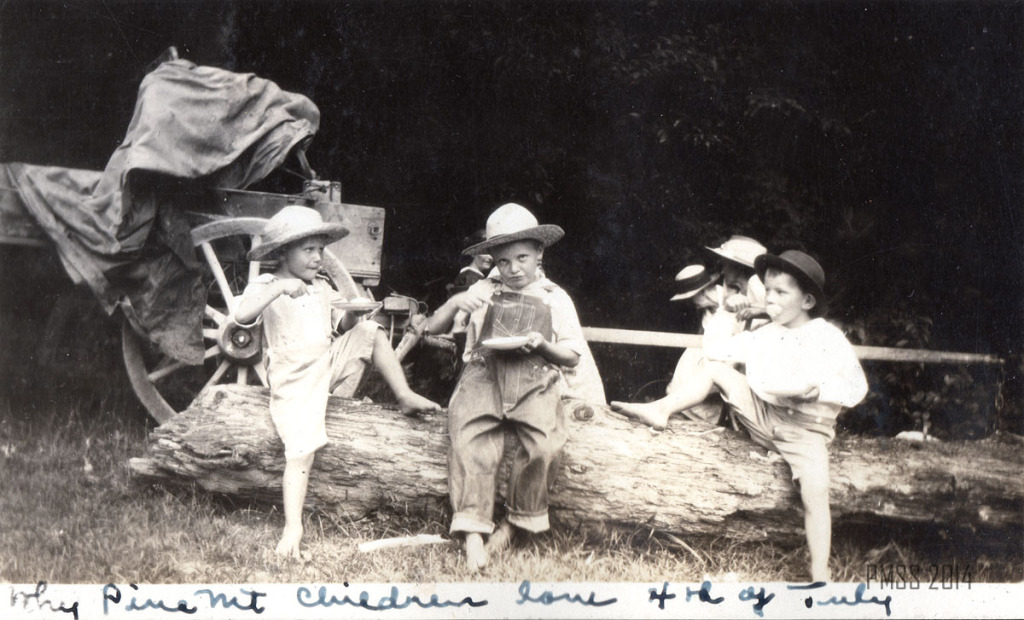 Gatherings at Pine Mountain were more frequent in the early days than they are now when practically the only days we see our neighbors at the school are the Fourth of July and the Community Fair. People came for workings, box suppers, Christmas, Sunday preachings at the House in the Woods, parties on Fridays or Saturdays. such gatherings here have grown infrequent for a number of reasons:  social life, if we may call the meagre and pitiful neighborhood intercourse by that name, has grown more interesting, with the growth of lumber camps and the improvement in the country schools and in living conditions; people go across the mountain more for their entertainment; our own extension centers provide something more easily attainable; and the life of Pine Mountain has grown so much that perhaps our neighbors do not feel so well acquainted. In the days when neighbors were building and working for us, it seemed more natural for them to come here. Knowing our neighbors through their visits at Pine Mountain was a part of the life of the early days that could still be lost, and we must regret that the growth of the school and the countryside have been away from each other.

These brief excerpts from Pine Mountain correspondence and publications capture that which “could still be lost.” Today we might paraphrase, “we must regret that the growth of the city and countryside have been away from each other,” as we watch many place-based celebrations fall away and see them replaced by electronic images on our phones, our TV, or our computer. We might all pause and take a few moments to recall how we came to celebrate the Fourth of July and how that day, a melting cone of ice-cream on a hot July day with family, with friends — with community, is a precious gift. 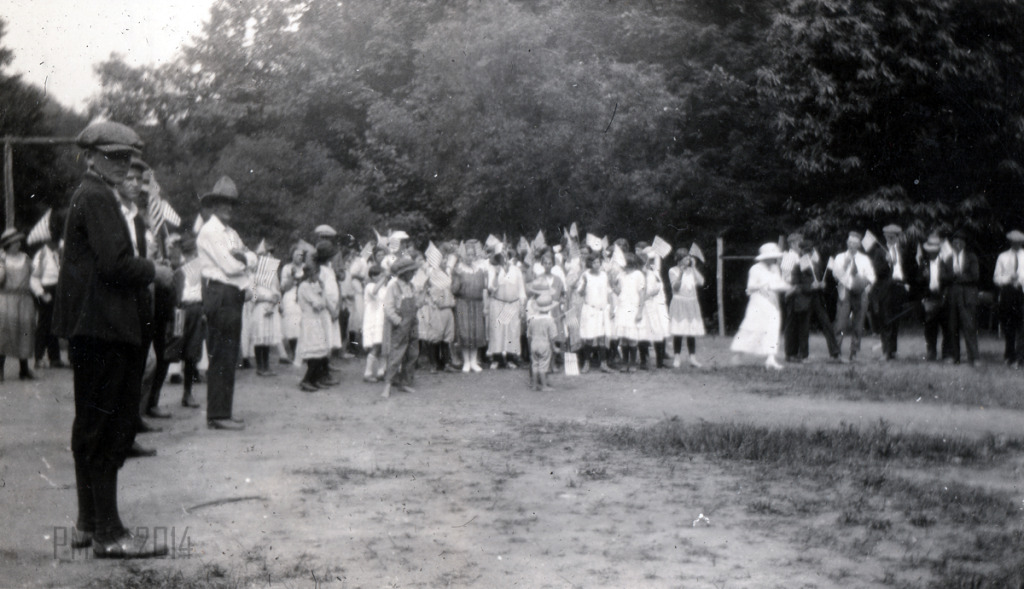