SCRAPBOOK BEFORE 1929
Bethea, Helen. “Author is Spirit in Move For Mountains”

The 1923 article, “Author is Spirit in Move for Mountains,” a clipping of which is located on page 23 of the Scrapbook before 1929, discusses a new plan for schools for mountain folk in Alabama. Written by Helen Bethea, the article describes the efforts of an Alabama Congressman as he tries to design a community-based series of schools in the mountains near Lookout Mountain, Alabama. Milford Wriarson Howard (1862-1937) is the author of a popular book, Peggy Ware. He is also a Populist, a politician, and a film-maker, and, by all accounts, a man of many interests.

Milford W. Howard was also a Congressman from Alabama. He was first elected to the House of Representatives as a Populist in 1894 and then reelected in 1896 but did not seek another term in 1898. When Howard returned to his hometown of Fort Payne, Alabama, to practice law he began his efforts to establish the educational communities described in the newspaper fragment.

Howard’s ideas as outlined by journalist Helen Bethea were ones centered on “self-support’ for the children in the remote rural area. He declared that educating these children would serve to counter-act “…the effect of the advancing hordes of immigrants.” He believed that the educated communities would stand as a bulwark “against the encroachments of modern American materialism, and the anarchy and lawlessness which have unfortunately accompanied the foreign population from their homes across the waters.”

Howard’s views stand in stark contrast to the desires of Uncle William Creech, one of the founders of Pine Mountain Settlement School who believed that in founding the school in Kentucky that it should be of benefit for the local region, but also be a source of inspiration for those across the seas. Many of the staff at the School had also served various immigrant populations either as missionaries or as part of the national Settlement Movement led by Jane Addams that was committed to the uplift of immigrants. It is perhaps these contrasts that led to the addition of the article in the clippings Scrapbook by Pine Mountain staff.

Just what relationship this article has with Pine Mountain is uncertain. However, it attracted enough attention to be added to the Scrapbook Before 1929 materials. While the political and educational values of the two men, William Creech, a founder and central figure in the early formation of Pine Mountain Settlement School, and Milford W. Howard, are quite disparate, they both appear to have adopted many of the same agrarian self-sustaining community ideas that found a ready advocate in one of Pine Mountain’s founders, Katherine Pettit.

The work of Milford W. Howard, however, has an under-current that appears to be shaped by a radically different point of view of the world from that of Creech and of Pettit. Milford W. Howard seems to be intent on isolation, while Creech was grounded in opening up the ideas and views of his neighbors to the world beyond the mountains. Helen Bethea, the author of the article seems to hint at the rather sinister ideology of Howard when he describes the people of the region ” … as plastic as the clay in the potter’s hand…” And, she depicts Howard as an empire builder who saw the Patriotic population of the Southern Appalachians, as “…2,000,000 of these people, untold raw wealth of American citizenship, in this mountainous section of the country, a wonderful influence for counteracting the effect of the advancing hordes of the immigrants…”

Today we would strongly suspect Howard of white supremacist views and apparently an established distrust of ” foreigners.” These personal ideologies did not fit well among many in the local Alabama population. His extensive plans and those of Miss Vivian Harper, his cousin, his paramour, his assistant, and later his second wife, were met with suspicion. The local people saw him as an “outsider” who had moved back to Alabama from California where he had pursued an unsuccessful film career. The lofty rationale he offered for his founding of the school was never fully subscribed to by those in the local community. The growing distrust of Howard’s motives and his poor financial management soon pushed the school into severe financial decline and it was forced to close.

Bethea tells the reader something of Howard’s background, much of it as described through Howard’s own filter. He tells of his early childhood and that his self-education as a criminal lawyer brought him to the Alabama bar at the age of 19, a fact that lacks verification. Helen Bethea also tells us that he “…published a sensational novel, “If Christ Came to Congress, in 1894, just before his first nomination to represent the Seventh District in Washington.” She notes in her article that “During the years that followed the appearance of that [early] book, while he was representing Alabama in the House of Representatives, he was the stormy petrel of politics in the State.” According to Bethea, he was deemed by many of his constituents as “too visionary for a place in the law-making body. ”

He continued his interest in film and pubic media and later wrote another book, The Bishop of the Ozarks, which was soon turned into a movie in 1934. The plot of the film was described by critics as “A mad doctor [who] uses his powers of telepathy to control a beautiful young girl.” While there is little conjecture by Bethea, she leaves the reader with a disturbing picture of Howard and leaves the reader to wonder about his motivations and scruples and her personal perspectives.

There is no commentary or notes accompanying this article fragment, but there is enough remaining of the publication to intrigue the reader. A search for additional information on the journalist Helen Bethea, and a search for correspondence among the letters of Katherine Pettit, Ethel de Long Zande, or Glyn Morris, Director in the 1930s, may shed more light on the relationship of the fragment to Pine Mountain Settlement School. Further research may also shed more light on Howard’s motivations for the Alabama school.

The appearance of this article in the Louisville Courier-Journal in Kentucky and written by Helen Bethea, suggests that there may have been at the time a lively discussion surrounding the activity of Mr. Howard in Alabama. Also, of further interest, some ten years later in 1934, Barry Bingham Sr., the owner and editor of the Courier-Journal, was on the Board of Trustees at Pine Mountain Settlement School.

GALLERY: SCRAPBOOK BEFORE 1929: Bethea, Helen. “Author is Spirit in Move For Mountains” 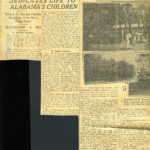 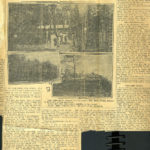 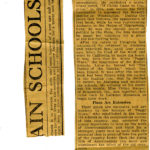 GUIDE TO SCRAPBOOK BEFORE 1929