Barry Bingham Sr.
Berea College Board Representative on PMSS Board, 1949
Board Member 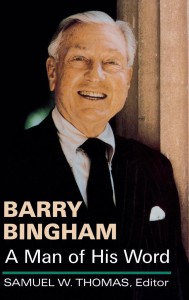 An oral history, compiled by Samuel Thomas using excerpts from interviews with Bingham, selections from his writings and comments by his wife, Mary Caperton Bingham. [pmss_archives_image_bingham]

Barry Bingham, Sr. was one of Pine Mountain School’s most dedicated Board meeting attendees. He and his wife Mary Clifford obviously enjoyed their time in the eastern Kentucky mountains. His affiliation with Pine Mountain was the result of a policy stating that a certain number of members of the PMSS Board was to be drawn from members of the Berea College faculty or associated affiliation. Bingham was a member of the Berea College Board of Trustees.

Pine Mountain has been affiliated with Berea College for many years, but the School has retained its corporate identity which includes its own Board of Trustees. Article XXI of the current (2015) PMSS by laws describes the School’s ongoing relationship with Berea College as a “close association and cooperation.”

According to files in the PMSS Archives, Bingham served as a PMSS Board member from 1949 until the 1970s and is listed as an honorary trustee as late as 1986. However, he likely remained attentive to Pine Mountain School throughout his more than 38 years on the Berea College Board, due to the partnership that existed between the schools.

George Barry Bingham Sr. was the patriarch of one of the last and proudest family media dynasties in America. The Bingham Family dominated local media in Louisville, Kentucky, for a large part of the 20th century and was partly responsible for bringing prosperity and culture to the area.

In 1918, Bingham’s father, the first Robert Worth Bingham, purchased The Louisville Courier-Journal and the Louisville Times with an inheritance from his wealthy second wife, Mary Lily (Kenan) Flagler Bingham, who was heiress to Florida real estate and Rockefeller oil fortunes. This was the beginning of the Bingham family story that, over the next approximately six decades and three generations, involved many public achievements as well as private tragedies.

Barry Bingham Sr. was the youngest of three children born to Robert and Eleanor (Miller) Bingham (Robert’s first wife who died in an auto accident in 1913), in Louisville, on February 10, 1906. Not only did he inherit the Louisville newspapers but, over his lifetime, he had his own long list of successes. He earned his A.B. degree, magna cum laude, in 1928 at Harvard University and his M.A. in civil engineering in 1939. From 1941 to 1945 he actively served in the U.S. Naval Reserve in Europe and the Pacific theater. In 1949 he was appointed Chief of Mission to France for the Economic Cooperation Administration. He was decorated Commander of the Order of the British Empire and as Commander of the Legion of Honor.

Though he was born into the newspaper family, Bingham began his career with The Louisville Courier-Journal in 1930 in the ranks. First as a reporter, secretary, associate publisher, then editor and finally as president of the business in 1945, he knew the business from the ground up. For the next nearly fifty years, Bingham was closely involved with the Pulitzer Prize-winning newspaper known for its liberal politics and socially conscious positions. He also became owner of several other communications businesses: the WHAS television station, two radio stations and the Standard Gravure printing company.

Meanwhile, Bingham was also actively involved with a number of other organizations, such as the Board of Trustees at Berea (Kentucky) College from 1938 to 1976 (of which he was chairman from 1974 to 1975), the Rockefeller Foundation, International Press Institute, the Washington National Portrait Gallery and the Asia Foundation.

In the 1960s Barry Sr. and his wife, Mary Clifford (Caperton) Bingham, lost two of their sons, Jonathan and Robert Worth III, in tragic accidents. After Bingham turned over control of the newspapers in 1971 to Barry Bingham Jr., his remaining son, the latter Bingham and his two sisters, Eleanor Miller Bingham and Sarah (“Sallie”) Montague Bingham, engaged in power struggles for positions within and ownership rights to the family’s communications companies. Bingham Sr. and his wife finally sold the family businesses to the Gannet chain in 1986 with the hope of bringing peace to the family.

Michael Wines’ 1986 LA Times article described the rise and fall of the Bingham family’s enterprises in a historical context:

Beyond the self-destruction of one of Kentucky’s richest and most gifted families, the 20 years following [Robert] Worth [III]’s death have also brought the end of a century-long dominance of the state by a handful of home-grown institutions and people–the old Louisville & Nashville Railroad, the coal and tobacco businesses, the venerable Democratic political machine. All seemed invincible in the mid-1960s, but now all of them are gone–bought out, moved or destroyed by economic decline or social change.

Barry Bingham Sr. died on August 15, 1988, in the city of his birth, Louisville, and is buried in Louisville’s Cave Hill Cemetery. His personal papers were given to the Filson Historical Society.

Throughout PMSS’s history, Pine Mountain’s trustees have brought to the School their many and varied talents, resources, and expertise. As one of those board members, Bingham shared skills gained from his career as a journalist and influential leader in the media industry. His strong journalistic support of the Eastern Kentucky region and his newspaper’s fearless attention to the environmental degradation of the area, political manipulation, literacy, poverty and other exploitative social ills and issues, no doubt helped to avert many catastrophes in the region. His many favorable “spreads” about the School in the Louisville Courier-Journal kept Pine Mountain in the attention of the State and helped to maintain its reputation as a watchdog for education and environmentalism in the State. He and his wife shared their wealth as generous supporters of the arts and of educational and social programs through their family foundation, the Mary and Barry Bingham Sr. Fund. But, most importantly, for Pine Mountain Settlement School, they shared their genuine love for the work of the institution and when the opportunity was provided, they were in attendance at many of the Board meetings and events of the School.

Return to Guide to PMSS Boards of Trustees, 1913 –