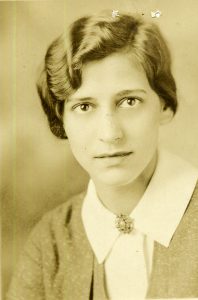 Margaret Kraatz Wright was born in 1909 in Berea, Kentucky. She lived in Berea most of her life, raised by her uncle, a physician at Berea College, Dr. Robert Crowley, and his wife.

Once Margaret graduated from high school, she began her studies at Berea College, majoring in French, minoring in Mathematics and taking Education courses. She attended Knapp Hall, a school on the Berea campus which trained future teachers as well as provided a quality education for students of all ages, from elementary to high school. On her Pine Mountain Settlement School (PMSS) Application Blank, she indicated, in addition to her pending graduation from Berea, that she had completed courses at Berea Academy in 1926 and partial courses at Northfield Seminary in Massachusetts in 1926-27.

In her letter of application to PMSS, addressed to Herbert H. Hadley, then Director, and dated January 10, 1931, she wrote that her sister Anna Kraatz had taught at Pine Mountain for a few months in 1930 “and like the work and the people so much that I am applying to teach there next year.” She described her credentials and interests as:

…equipped to teach Mathematics, English, Science and French in High School, and am also very much interested in the primary school. I am having some experience this year with young children in teaching physical education, consisting largely of games, to the girls of the first four grades. And I have also taught Sunday School Class of young girls at home. I play the violin and the piano, having played violin in the college orchestra for seven years and given and assisted in several recitals.

She had also played in Berea College’s student trio for three years. Her music teacher at Berea, Mary Pierson Hutchins, wrote a highly favorable letter of recommendation for Margaret, describing her student as “very intelligent, steady worker, very prompt, accurate and efficient…I understand that she is among the best students of her class…She is reserved, a girl of the highest integrity and good sense.”

Margaret Kraatz graduated from Berea College in June 1931 and was hired by PMSS to begin work the following fall as a teacher in “Little School,” a program for pre-school age children designed to prepare them for first grade.

However, during the summer Margaret was informed by then PMSS Director Glyn Morris that there would not be an opening for her at Pine Mountain in the coming school year. He explained: “Until this year, [Harlan] County has appropriated money for the maintenance of the ‘Little School’ here, but due to the depression they are unable to do this for the coming term.”

Margaret evidently offered that she would work at the School for room and board. Glynn Morris accepted her offer, stating the terms in a July 27, 1931, letter:

Since you are willing to come to Pine Mountain to teach the Little School for maintenance and $20.00 per month, we will be awfully glad to have you come. I wish that the monetary return could be more but this is all that the parents can afford to pay.

You will live in the school, as one of our workers, and in return for maintenance, I think give at least two hours a day to some work for the school. I can’t say just what this will be, perhaps the evening study hour in one of the houses, or help with the entertainments.

Margaret did indeed become the “Little School” teacher for the School term, 1931-1932.

Margaret married Theodore Mathis Wright in 1932 and the couple moved to Bellevue, Kentucky, where Theodore coached and taught high school math and science. Theodore and Margaret had one son, Paul Mathis Wright, and a daughter, Elizabeth Ann “Betsy” Wright (Herrick).

By 1944, the Wrights returned to Berea College where they worked until their retirement, Theodore as a professor in the college’s Mathematics Department and Margaret as a Development Office employee. Margaret was also an active volunteer in health-related services and a life-long participant in the musical life of Berea. As a talented violinist, she played in the Berea College Orchestra for many years and was a musician for “Wilderness Road,” traveling with the Cincinnati Symphony Orchestra. Later, she was a member of the Berea String Ensemble and several regional musical groups. She also played for the Berea College Folk Dancers and the Christmas Country Dance School.

Margaret was also an active volunteer in health-related services and a life-long participant in the musical life of Berea. As a talented violinist, she played in the Berea College Orchestra for many years and was a musician for “Wilderness Road,” traveling with the Cincinnati Symphony Orchestra. Later, she was a member of the Berea String Ensemble and several regional musical groups. She also played for the Berea College Folk Dancers and the Christmas Country Dance School.

The PMSS Collections has a large collection of PMSS-related letters to and from Margaret Kraatz Wright which will be processed and available online in the future.