SCRAPBOOK BEFORE 1929: “A Mountain Farm Girl” 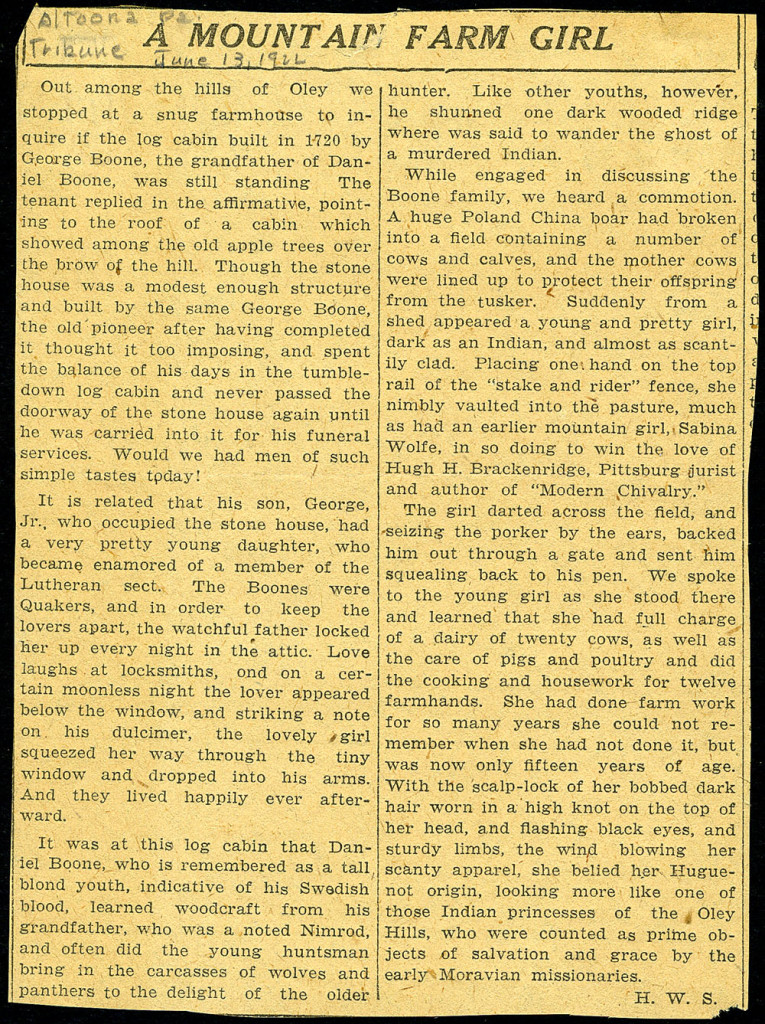 This romantic news article, written in 1922 by H.W.S. [?] for the Altoona, Pennsylvania Tribune must have caught someone’s eye — possibly one of Pine Mountain’s early women farmers, or Miss Pettit. There are certainly overlaps in this tale with the interests and experiences of many of the women on the staff at Pine Mountain Settlement School. Miss Katherine Pettit, the early founder of the School, in particular, had a life-long interest in farming and it is not surprising to find her continuing that interest following her retirement from Pine Mountain in 1935. According to friends she spent much of her retirement traveling around the eastern Kentucky region advising on farm practice and livestock maintenance. Miss Burns, the first manager of the dairy at Pine Mountain, was particularly skilled in farm and dairy.

Certainly a romantic tale with overtones of ethnic and religious certitude, this is just one such story that must have appealed to staff and students as they wrestled with the demanding life at Pine Mountain where all shared in the responsibilities and realities of the farm and daily life while harboring a return to John Ruskin’s garden. Like the young girl in the story, the women In the community milked the cows, and often fed the livestock. The women raised gardens and tended the “craps” the same as the men in their household, but the toll on the young was fast and brutal, as seen in many of the images in the Pine Mountain photograph collection. While vital tasks were gender neutral in the mountains of eastern Kentucky, as they are today on many of America’s farms, this shared responsibility was not viewed through the same lens as many of the workers who came to the Settlement School.

FULL TEXT OF THE ARTICLE

Out among the hills of Oley we stopped at a snug farmhouse to inquire if the log cabin built in 1720 by George Boone, the grandfather of Dan­iel Boone, was still standing. The tenant replied in the affirmative, pointing to the roof of a cabin which showed among the old apple trees over the brow of the hill. Though the stone house was a modest enough structure and built by the same George Boone, the old pioneer after having completed thought it too imposing, and spent the balance of his days in the tumble­down log cabin and never passed the way of the stone house again until he was carried into it for his funeral services. Would we had men of such simple tastes today!

It is related that his son, George, Jr., who occupied the stone house, had very pretty young daughter, who became enamored of a member of Lutheran sect. The Boones were Quakers, and in order to keep them apart, the watchful father locked her up every night in the attic. Love laughs at locksmiths, and on a certain moonless night the lover appeared below the window, and striking a note on his dulcimer, the lovely girl squeezed her way through the tiny window and dropped into his arms. And they lived happily ever after.

It was at this log cabin that Dan­iel Boone, who is remembered as a tall blond youth, indicative of his Swedish blood, learned woodcraft from his grandfather, who was a noted Nimrod, and often did the young huntsman bring in carcasses of wolves and panthers to the delight of the hunter. Like other youths, however, he shunned one dark wooded ridge where was said to wander the ghost of a murdered Indian.

While engaged in discussing the Boone family, we heard a commotion. A huge Poland China boar had broken into a field containing a number of cows and calves, and the mother cow lined up to protect their offspring from the tusker. Suddenly from a shed appeared a young and pretty girl, dark as an Indian, and almost as scantily clad. Placing one, hand on the top rail of the “stake and rider” fence, she nimbly vaulted into the pasture, much as had an earlier mountain girl, Sabina Wolfe, in so doing to win the love of Hugh H. Brackenridge, Pittsburg jurist and author of “Modern Chivalry.”
The girl darted across the field, and seizing the porker by the ears, backed him out through a gate and sent him squealing back to his pen. We spoke to the young girl as she stood there and learned that she had full charge of a dairy of twenty cows, as well as the care of pigs and poultry and did the cooking and housework for twelve farmhands. She had done farm work for so many years she could not remember when she had not done it, but was now only fifteen years of age. With the scalp-lock of her bobbed dark hair worn in a high knot on the top of her head, and flashing black eyes, and sturdy limbs, the wind blowing her scanty apparel, she belied her Huguenot origin, looking more like one of those Indian princesses of the Oley Hills, who were counted as prime objects of salvation and grace by the early Moravian missionaries.
H.W.S.
GO BACK TO:
SCRAPBOOK BEFORE 1929