SCRAPBOOK BEFORE 1929  Glimpse of the Kentucky Mountains

A Glimpse of the Kentucky Mountains: Pine Mountain Settlement, Ky. by L.G 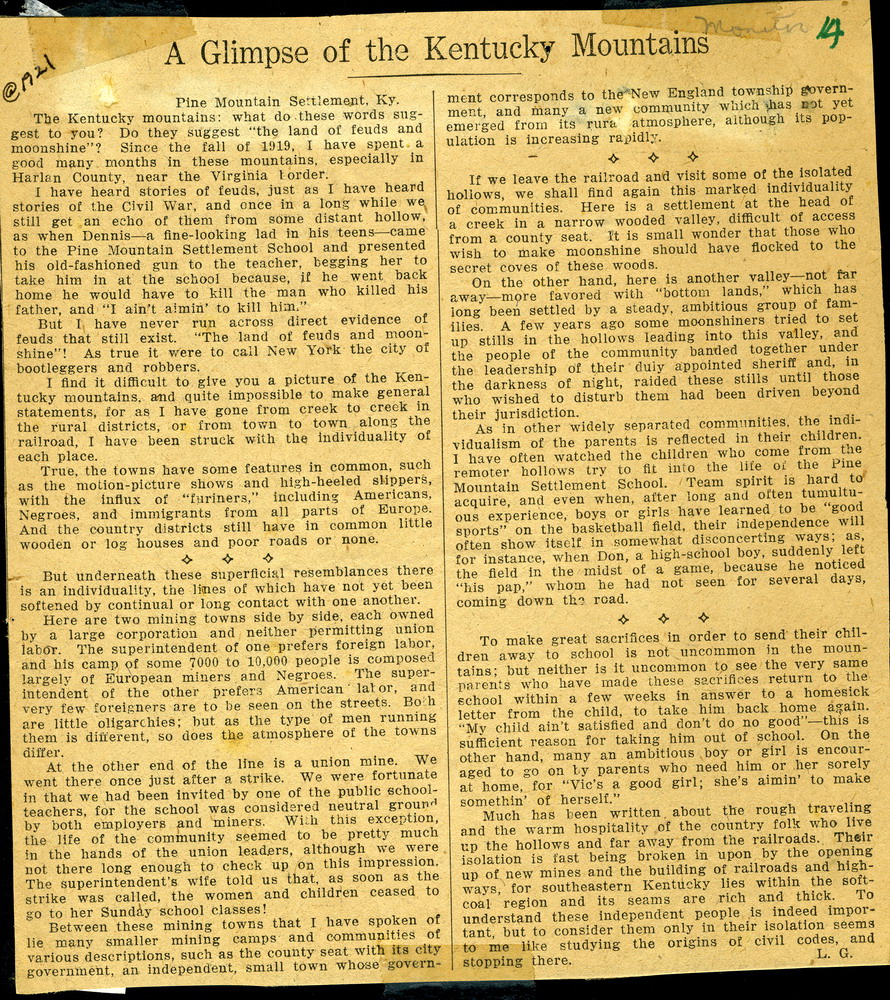 [The above article, which appeared in the 1921 Christian Science Monitor, tries to capture the essence of the area surrounding Pine Mountain and the growing contribution of the Pine Mountain Settlement School just nine years after it was founded. A transcription of the article is printed below.]

TRANSCRIPTION: A Glimpse of the Kentucky Mountains

The Kentucky mountains: what do these words suggest to you? Do they suggest “the land of feuds and moonshine”? Since the fall of 1919, I have spent a good many months in these mountains, especially in Harlan County, near the Virginia border.

I have heard stories of feuds, just as I have heard stories of the Civil War, and once in a long while we still get an echo of them from some distant hollow, as when Dennis—a fine-looking lad in his teens—came to the Pine Mountain Settlement School and presented his old-fashioned gun to the teacher, begging her to take him in at the school because, if he went back home he would have to kill the man who killed his father, and “I ain’t aimin’ to kill him.”

But I have never run across direct evidence of feuds that still exist. “The land of feuds and moonshine”! As true it were to call New York the city of bootleggers and robbers.

I find it difficult to give you a picture of the Kentucky mountains, and quite impossible to make general statements, for as I have gone from creek to creek in the rural districts, or from town to town along the railroad, I have been struck with the individuality of each place.

True, the towns have some features in common, such as the motion-picture shows and high-heeled slippers, with the influx of “furiners,” including Americans, Negroes, and immigrants from all parts of Europe. And the country districts still have in common little wooden or log houses and poor roads or none.

But underneath these superficial resemblances, there is an individuality, the lines of which have not yet been softened by continual or long contact with one another.

Here are two mining towns side by side, each owned by a large corporation and neither permitting union labor. The superintendent of one prefers foreign labor, and his camp of some 7000 to 10,000 people is composed largely of European miners and Negroes. The superintendent of the other prefers American labor, and very few foreigners are to be seen on the streets. Both are little oligarchies,  but as the type of men running them is different, so does the atmosphere of the towns differ.

At the other end of the line is a union mine. We went there once just after a strike. We were fortunate in that we had been invited by one of the public school-teachers, for the school was considered neutral ground by both employers and miners. With this exception, the life of the community seemed to be pretty much in the hands of the union leaders, although we were not there long enough to check up on this impression. The superintendent’s wife told us that, as soon as the strike was called, the women and children ceased to go to her Sunday school classes!

Between these mining towns that I have spoken of lie many smaller mining camps and communities of various descriptions, such as the county seat with its city government, an independent, small town whose government corresponds to the New England township government, and many a new community which has not yet emerged from its rural atmosphere, although its population is increasing rapidly.

If we leave the railroad and visit some of the isolated hollows, we shall find again this marked individuality of communities. Here is a settlement at the head of a creek in a narrow wooded valley, difficult of access from a county seat. It is small wonder that those who wish to make moonshine should have flocked to the secret coves of these woods.

On the other hand, here is another valley—not far away—more favored with “bottom lands,” which has long been settled by a steady, ambitious group of families. A few years ago some moonshiners tried to set up stills in the hollows leading into this valley, and the people of the community banded together under the leadership of their duly appointed sheriff and, in the darkness of night, raided these stills until those who wished to disturb them had been driven beyond their jurisdiction.

As in other widely separated communities, the individualism of the parents is reflected in their children. I have often watched the children who come from the remoter hollows try to fit into the life of the Pine Mountain Settlement School. Team spirit is hard to acquire, and even when, after long and often tumultuous experience, boys or girls have learned to be “good sports” on the basketball field, their independence will often show itself in somewhat disconcerting ways; as, for instance, when Don, a high-school boy, suddenly left the field in the midst of a game, because he noticed “his pap,” whom he had not seen for several days, coming down the road.

To make great sacrifices in order to send their children away to school is not uncommon in the mountains; but neither is it uncommon to see the very same parents who have made these sacrifices return to the school within a few weeks in answer to a homesick letter from the child, to take him back home again. “My child ain’t satisfied and don’t do no good”— this is sufficient reason for taking him out of school. On the other hand, many an ambitious boy or girl is encouraged to go on by parents who need him or her sorely at home, for “Vic’s a good girl; she’s aimin’ to make somethin’ of herself.”

Much has been written, about the rough traveling and the warm hospitality of the country folk who live up the hollows and far away from the railroads. Their isolation is fast being broken in upon by the opening up of new mines and the building of railroads and highways, for southeastern Kentucky lies within the soft-coal region and its seams are rich and thick. To understand these independent people is indeed important, but to consider them only in their isolation seems to me like studying the origins of civil codes, and stopping there. L. G.