[Note: Letters from PMSS staff in the PMSS Collections are carbon copies, typewritten, unsigned, and meant for the Office files. The original signed copies were sent to the correspondents.]

[27] August 17, 1957. To John V. Landes from Burton Rogers, PMSS Director, apologizing for his late response and asking if the information is still needed.

[28] February 7, 1958. To “Principal” from George W. Tye, 1/Lt. USAF, APO, NYC, enclosing an application of admission to University of Maryland, Overseas Program, to be completed.

[29] March 21, 1958. To the Office of Admissions, University of Maryland Overseas Program, APO, NYC, from Rogers, returning the completed form and explaining Tye’s time at PMSS: “…George W. Tye was enrolled at this school from 1943 to 1946, a period of three years, during which he completed the last three years of high school. He was admitted as a freshman in 1943 but tests showed that in achievement he was well past the first year of high school and he was promoted immediately to the second year of high school.”

[30] March 21, 1958. To Bill” (George W. Tye), USAF, APO, NYC, from Rogers, who explains why he was late in responding to his request for a transcript. “No one is left at Pine Mountain but myself who knows how the former student records were kept and it is difficult to attend to these when I have no secretary here. At present Mrs. (Fern Hall) Hayes is helping me from their new home across the mountain.” He has since mailed his application form and transcript to University of Maryland Overseas Program. Tells Bill about the request from Florida.

[32] April 23, 1959. To Tye from Rogers, who is sending Tye’s transcript to the address Tye had given. Rogers asks that Tye send letters directly to him instead of the Principal. “All records of former boarding students, from the private high school, are here in my office.”

[34] June 22, 1961. A memo to [unspecified] from “m.” “George William Tye was here with his family, sorry to have missed you. He is now at the Univ. of Maryland…expects to be transferred to California. He asked about many people, most of whom I didn’t know, but I gave him Mrs. (Alice Joy) Keith’s, Miss (Edith) Cold’s and Jim Bishop’s California addresses. He talked to Brit (Wilder), and the family had a picnic lunch here.” 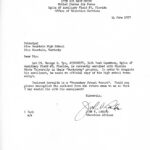 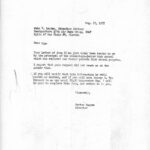 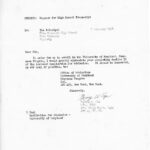 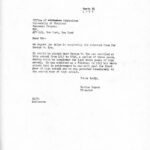 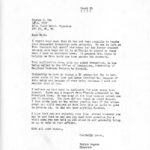 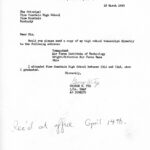 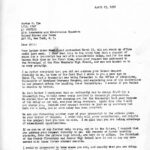 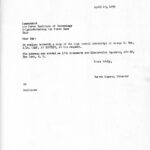 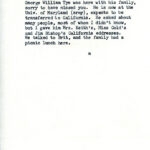