For thirty-six years Pine Mountain has carried out the ideal of its founder — to serve the people of the mountains. To do this effectively changes have been made in the program from time to time to meet changing conditions in the area. Now the greatest educational need in our valley is for better elementary schooling.” Crutchfield then describes the current dire conditions of the one-room schools in the area; states that PMSS’s contribution would be “a sound eight-grade consolidated school.”

He lists the actions taking by the Board of Trustees in early May; (1.) PMSS “is to be affiliated with Berea College,” which will act in a supervisory function and PMSS will “retain its distinct name, separate funds, and corporate identity.” (2.) Beginning in Fall 1949, PMSS “will operate as a consolidated elementary school rather than a boarding school.” Crutchfield describes how this will be done in coordination with Harlan County.

(3.) “The community hospital will be moved to West Wind….Funds for the proposed Creech Memorial Hospital will remain intact and plans for its construction go forward.”

(4.) “The farm program will explore new farming techniques to help discover and demonstrate to the community what can most profitably be done with a small mountain farm.”

“During recent years with increased costs and lowered returns from investments we have been forced to draw heavily on capital funds. For the new program it will be necessary to raise as much as we have in the past since we must operate without further use of capital funds.”

“Faithfully yours,
James S. Crutchfield
CHAIRMAN, BOARD OF TRUSTEES” 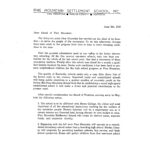 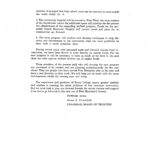