There was a week-long Day Camp for community children.

Community use of the FNS – Pine Mountain clinic increased.

Red Bird Mission sponsored a pre-school one afternoon per week in Burkham Bldg.

PMSS Trustees voted to contract with the Dollar Branch Coal Co. for deep-mining on a 60 acre tract of PMSS property.

James Greene III, Harlan, completed a doctoral dissertation at Ohio State University on “Progressives in the Southern Mountains,” a history of Pine Mountain Settlement School 1913 – 1930’s. Lee R. Anderson completed a photographic exhibition on the history of PMSS as a master’s project at the University of Louisville. Walter Oldendorf, Berea College Department of Education, completed a study (with accompanying photos) of PMSS.

Following the death of long-time Trustee and PMSS friend Kenneth Thompson, Springer Hoskins was elected Secretary of the Board of Trustees. Mildred Mahoney agreed to record the minutes and submit the copy to Springer Hoskins.

Berea professor Bill Best was elected as a Berea representative to the PMSS Board, succeeding Kenneth Thompson.

In Executive Session during the April Board Meeting, Trustees voted to ask Director Alvin Boggs to become Associate Director in charge of Development, as soon as a new PMSS Director is appointed.

Trustee Marian Kingman (former PMSS staff member, retired Berea faculty member) resigned from the PMSS Board, in preparation for her move to a retirement community in North Carolina. She was named an honorary PMSS trustee. Dr. Tom Boyd, Berea Assistant Professor of Sociology, was elected to succeed Ms. Kingman as a Berea representative on the PMSS Board of Trustees.

The Board enacted the recommendation of the Alumni Association that they elect their representative directly, to serve a regular 6-year-term.

Mary Rogers received awards from the National Science for Youth Foundation, and the Kentucky Society of Natural History, in recognition of her contributions through the PMSS Environmental Education program.

The Harlan Co. Poke Sallet Festival was held at PMSS for the 7th (and final) year, to be returned to Harlan. 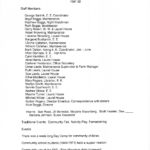 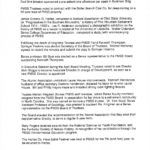