ANNUAL COMMUNITY DAY TO BE HELD OCTOBER 11 — HOST JUNIOR CLASS to dance and sing, eat ice cream, watch the set running and dramatization, practice sheep and hog calling; hosted by the Junior class; entertainment by five rural schools in the surrounding community. “Pine Mountain is keeping alive folk ways that are in danger of being lost or forgotten in the swift pace of the machine age, which is even now finding its way into the most remote sections of the Kentucky mountains.”

STUDENT LIFE PORTRAYED IN COLOR FILM
“For the past two months the Pine Mountain Students have been working with Mr. and Mrs. Ray Garner of Brooklyn, New York. Mr. and Mrs. Garner are employed by the Harmon Foundation to take two movies of Pine Mountain.

The purpose of one of the movies is to show how a cooperative is organized and how it functions. The other takes in the activities of the whole school. Both of the movies are filmed in technicolor.

The Harmon foundation produces Co-op movies to be used for class-room purposes. Pine Mountain will have duplicate copies of the movies for publicity.

Mr. and Mrs. Garner are leaving for the Smoky Mountains soon where they will take a movie of the National Park. They expect to return to Pine Mountain during the latter part of November to finish the Co-op movie.

TEACHING COOPERATIVES AT PINE MOUNTAIN – An article with this title appeared in the July issue of Consumer Cooperative Magazine, written by Miss Gladys Hill and Miss Vera Hackman; explains benefits of cooperatives; classroom materials; how the store is operated & conforms to the Rochdale Principles; how consumer education and cooperation is incorporated in the 10th-grade subjects.

Page 2
The Pine Cone: “A school and community paper published monthly by the students of Pine Mountain Settlement School.”

EDITORIAL – Students must work to better themselves as well as the School.

SUMMER CAMPS RETURN TO PINE MOUNTAIN – Includes the Associated Junior Work Camp (8 weeks), recreation camps, the annual Kiwanis camp and the Presbyterian Conference of children from Cawood and vicinity; lists names of the directors and teachers of the Assoc Jr Work Camp; tasks; names of boys and girls in the work camp.

[Images of pages 3 and 4 are missing]

Page 5
BOOK GIFTS – R.R. Bowker Company has been donating two or three boxes of books to PMSS each year since 1932; lists titles of books received in 1941.

ENGLISH TO BE TAUGHT BY MISS [MARTHA ANNE] KEEN.

EDUCATIONAL FILM ASSOCIATION – “Pine Mountain now belongs to the Eastern State Teachers College regional Cooperative Classroom Association,” which consists of 30 high schools; allows use of 60 reels of film to train teachers in the use of Visual Education. “These films are the well-known ‘Erpi’ educational sound films, produced by Electrical Research Products Inc.

Page 6
D.A.R. GROUP VISITS SCHOOL – Lists names of the representatives; PMSS is one of 14 DAR Approved Schools that receive contributions from DAR chapters.

“WO [sic] IS WE” – SENIORS – Seniors study hard for their future.

MOUNTAIN CONFERENCE TO BE HELD IN BEREA [College] – Conference of Southern Mountain Workers will be attended by Glyn Morris, PMSS Director and chairman of the executive board of the organization; the conference publishes Mountain Life and Work. “The purpose of the magazine and conference is to further education and a mutual understanding between the Appalachian mountains and the rest of the nation.” 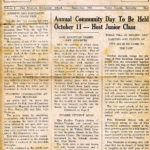 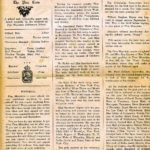 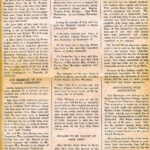 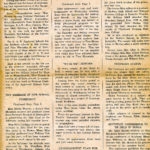