Dear Friend,
I would have answered your kind letter sooner but was waiting to hear from Mr. Shell in regard to the matter you spoke about.

I am afraid the chances are against us in securing 100 acres of his land for school purposes. He is an old-fashioned fellow, as you know, and does not appreciate things of that sort as we do. However, I think if they wanted to build the school they could rent or lease from him all the land they would want as long as they would want it at a reasonable price.

Well, we would all like to see you and Mrs. Lyttle and the babies and hope you will all come out this fall and spend a few weeks with us. John is with me yet. Heard his folks are well. Would write more but it’s about mail time. Give my best regards to all the family.
Yours Truly,
E. M. Nolan

About one year ago I wrote you a letter in regard to establishing a school on Greasy Creek near Pine Mountain. Since that time you have been on the ground and looked over the situation yourself. And from what I can learn, you are thinking of putting a school over there on the industrial plan.

Now I have been near the field you have located for this school for nearly three years. I was over there this Sunday and preached some funerals and was never so impressed of the great need of a school as now. And the need of beginning of the work at once because there [are] so many young people as well as older ones going astray. And when I looked over this Godforsaken country, I could truly say, “The fields are white unto the harvest.” And I pray the Lord not to send more laborers for there is none there but to send laborers into the field to help save the harvest of souls that are going down in ignorance.

There was an elderly lady, 70 years old, who passed away while I were (sic) there and there were young men and young women standing around the corpse swearing,…

…drinking whiskey and smoking cigarettes, hitting each other with rocks, brothers and cousins trying to kill each other. Two of the Turner brothers rode along the road with each other for five miles with pistols in hand, daring each other to shoot.

Similar circumstances existed when you began the school at Hindman. You could not get twenty men in a crowd together without three or four of the number being intoxicated and now I have seen a crowd of 300 on the streets of Hindman and never saw a drop of whiskey and but few cigarettes smoked. I believe that if this school is begun at once that a new day will begin to dawn for them and they will see something better to employ their minds and a greater number will be saved than if neglected. They have an idea that they are so far into the mountains and are so far behind the times that no-one cares for them or will anything be done to help them. If your work can only be started…

…by spring they will realize that better things are in store for them and the investment would be safe.

Hoping the Lord will direct you and make the way possible for this work to [begin] at once,
I am sincerely yours,
Lewis Lyttle 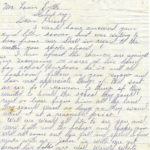 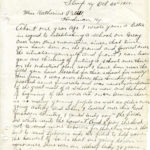 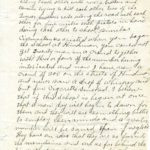 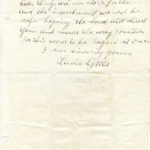