These tall tales, including a bear story told by Old John Shell [a tall tale in himself] as the hero, appeared in the Pine Mountain Notes, March 1927, vol 11, No. 7. 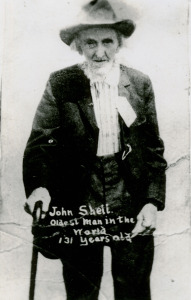 Notes, the bi-annual publication of Pine Mountain Settlement School, often featured writings by staff that highlighted life in the community of Pine Mountain. They included tales that were then introduced to the large audience across the country who received the PMSS Notes and who seemed to enjoy this local oral culture.

The following tales by Old John Shell were most likely transcribed by Angela Melville, a staff member and Interim Director at Pine Mountain Settlement. These brief tales are representative of the engaging stories that ran across the community and were collected by visitors such as Percy MacKaye and the staff in the early settlement school years.

Collected and coveted by those whose ear was captured by Shell, the stories show up in the papers of many staff and are a testimony to the large and long oral tradition of the community. Tales such as Shell’s are central to the Archival collections at Pine Mountain. Old John Shell, a masterful story-teller, obviously enjoyed telling tales and Alice Cobb clearly takes delight in his entertaining delivery. These early tales, some of which showed up in Notes were included in Alice Cobb’s gathered writings.

A NEW bear Story has just come our way, the hero of it is John Shell who was once reputed to be the oldest living person in the world. Though thirty years and more were cut off his age when dates were verified, this tale of his boyhood goes back beyond 1840 when settlers in this country were few. Game of all sorts abounded and a good hunting dog was a prize possession. Our narrator had heard the old man tell this tale time and again, to the huge relish of both. Here it is as we heard it:

“When Johnny was nigh grown he and his pappy set out with their dogs one mornin’ to look at two bar traps they had set. The traps were far apart and they thought to save time by each one takin’ a trap. His pappy’s dog was the smartest and the old man made Johnny swap dogs with him for safety. The boy had only one shot left in his gun and his pappy reminded him again of his old hunter’s rule never to shoot his last shoot fur away from home for fear he might need it a heap wurser on the way home. There was no bar in the trap but the dog growled so Johnny knew there must be one mighty nigh. He bade the dog hush and of course hit did—hit was an awful good dog to mind. He started up the holler, put his hand on the end of a great log as he xxxx it and up from the other side of it a big bar jumped and made for him. The dog weren’t goin to see Johnny hurt. He flew at the bar. Next thing Johnny heard the dog’s shoulder bones scrunchin in the bar’s jaws. That made him so mad he throwed down his gun and made at the bar with his knife. They hugged up and Johnny stabbed that bar fourteen times afore he kilt him. The bar he raked his chest with his paw, mighty nigh clawed open that vein in his neck. The old man showed me the white scar where his claws gouged him. He never had no notion of using that gun. His pappy had his mind fixed on allus savin the last shot to go home by. When Johnny went home with his gouged-out chest pappy was rearin mad because he had let the dog get hurt! That dog, damaged up as he was, was a pyure dog! The old man traded him, lame shoulder and all, for seven hundred acres of land.”

The old tales in the mountains are worn down through many repeatings to the bare essentials, like the ballad tunes that, flowing through the centuries, have kept only a crystal clear beauty. These folk tales have no unnecessary phrases, no interpolated descriptions. The few words necessary to tell them are strong with the shrewd humor of plain folks. The audience often knows the tale ahead, just where the laugh should come. But the tales are all the better for being familiar. Perfectly simple, they are never dull and threadbare, rather like well-worn gold coins passing from hand to hand, precious to each holder.

Here is one of a scary feller who thought he ought to sit up all night with a sick neighbor.

“He couldn’t git started till atter dark and havin no lantern he was oneasy in his mind because there was a old wild boar loose in the mountains that had been bothering folks a heap. He allowed he mought meet up with it. Shore enough, he hadn’t got down to the Bull Horn Ford afore he heerd a gruntin and a growlin and a stirrin in the leaves and he mighty nigh knowed it war the old boar. He made for the highest tree and clumb up it. Hit was so big he couldn’t git his arms around it and so high to the first limbs he couldn’t climb up to ’em. He helt on as long as he could. When there warn’t no more noise down below he hoped the old boar had gone plum off and he let hisself down. He hadn’t no more than teched the ground when the gruntin’ and russlin’ begun again and up he clumb. He helt on till he allowed it war gone and then he drapped agin. Up starts the hog agin. Well sir, they might have kept that up all night if Henry Shell hadn’t come by with a light. Old Joe was mighty weak by this time and proud for help to save him from bein’ all tore up by the boar when he couldn’t holt on no more. Well sir, you know when they found hit, hit warn’t no boar at all but a leetle old shoat [baby pig] couldn’t a weighed more than sixty pounds, what had hurt hit’s hip and couldn’t get along. Jes for that leetle thing had wore the moss and bark offen the tree and all the hide offen his legs. You can see the tracks on that tree yit whar he went up and down.”

Here is one as famous as the Baron Munchausen* tales. [A reference to the repetition of the bear story in Percy MacKaye’s Tall Tales of the Kentucky Mountains 1924 (1926). Baron Munchausen is a fictional German nobleman created by the German writer Rudolf Erich Raspe in his 1785 book Baron Munchausen’s Narrative of his Marvellous Travels and Campaigns in Russia. [Wikipedia] The character is loosely based on a real baron, Hieronymus Karl Friedrich, Freiherr von Münchhausen who gained notoriety for his exaggerated adventures

” I was a-goin to the store for coal oil through a leetle piece of woods when all of a suddint I seed right a-fore me a wild cat a-settin in the road. I turned round to run back and thar behind me sat another. I run up the hill a piece and stood a-watchin, allowin I’d go home fust chance, When them two cats begun to growl and then to spring and claw at each other’s hide, a-jerkin out the fur. They fit and fit and every time they’d jump at each other they’d rise a leetle higher. Purty soon they ris plum out of sight and never come down. Well I went home, but the next day I passed that way again and the fur was still a-fallin’.”