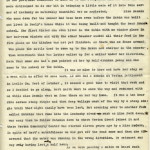 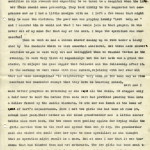 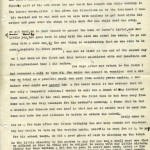 [TRANSCRIPTION OF AUGUST 1928 REPORT courtesy of Gretchen Rasch, great-granddaughter of the Stapletons]:

Our very happy two months of vacation are already three weeks in the past. Such abundance of life as we saw everywhere made us feel all the more determined to do our bit in bringing a little more of it into this corner of Kentucky so naturally beautiful but so neglected.

Miss Dennis who came down for the Summer had been here even before the Cabin was built and lived in Neely’s house while it was being built and taught the Bear Branch school. The first Winter she even lived in the Cabin with no window glass in her bed-room windows and, with the other teacher, cooked all their food in the fire place as the kitchen was not yet finished. As there was no fence around the place the cattle used to come up to the Cabin and shelter in the excavation underneath that was later walled up for a cellar under her direction. More than once she had a gun pointed at her by half drunken young men who came to the school or the Cabin.

It was so nice to know and have her stay on a week with us after we came back. As she had a cousin at Wooton Settlement in Leslie Co. west of Letcher, it seemed a good time to visit that work and so I decided to go along. Bert Smith went to show the way and returned with me while Miss Dennis went on from there on her way home. It was a ten hour ride across steep ridges and thru deep valleys much of the way by a steep single trail that might easily have been lost. But crossing over to another Fork called Cutshin that runs into the Kentucky river much as Line Fork does. It was easy then to follow Cutshin down to where Wooton Creek joined it and there Wooton Community Center was started eleven years ago by a Miss McCord. In spite of Bert’s watchfulness we did get off the road once and then she discovered that the water was running in the wrong direction. We retraced our way having lost only a half hour.

As we were passing a cabin we heard such groaning that Bert called out “Is some one sick down thar? Do you want to see a doctor?”  Miss Dennis who was riding the mule alternately with Bert stayed by the nags while Bert and the Doctor scrambled down the steep hillside and across a little creek over which she threw a convenient branch for me to step on, another, steadying my uncertain steps then up again somewhat to the house beside the lumber camp railroad. A man was suffering intense pain from a chronic condition in his stomach and expecting to be taken to a hospital when the lumber train should come presently. They took kindly to the suggested hot compresses and as I had a little anodyne with me I left a few doses that might help to ease the distress. The poor man was praying loudly “Lord help me” and I assured him He would and that I too would join in that prayer. He was never out of my mind for that day or the next. I hope the operation was successful!

Then we went on and, a sudden shower coming up, we rode under a leaky shed by the roadside where we were somewhat sheltered. But three more showers over took us, so we were very wet and bedraggled when we reached Wooton in the evening. We were very tired – I especially – but the hot bath was a grand restorer. We enjoyed the good supper that followed and the fellowship after it. In the morning we went round with Miss McCord, rejoicing with her over all that had been accomplished “in neighboring” very much the same way as Pine Mountain has succeeded except they have no boarding school.

Bert and I made better progress on returning as she rode all the while. We stopped only a half hour to bait the horses from eats Bert had provided, pouring them into a hollow formed by the saddle blankets. We ate our own lunch at the home of one of Bert’s acquaintance. Here I met two girls who had been at Pine Mt school last year.  Their mother, an old blind grand-mother and a little sister Goldie also were here. The two women were peeling apples for drying while the girls carried them to the roof and spread them out to dry. The grandmother said she wished she could show her eyes to some specialist as she thought that an operation might result in a cure. But at once I saw that it was trachoma that had blinded them and not cataracts. The two girls had been sent to Richmond – the state hospital for trachoma – and had been cured there.

I offered to read to the grand-mother from my testament, who after listening while I explained some Bible picture cards to little Goldie said, “she reckoned that I could talk all right.”  We were cordially invited to remain longer.

But just before we started for Wooton, Bert’s husband Jason had come to the Cabin with an infected wound in the fleshy part of his arm where the saw teeth had caught him while working in the lumber woods. Altho I had given him directions as to the treatment I was a bit worried and so was Bert and we were both anxious to get back altho his mother had gone over the ridge to help care for him while Bert was away.

As we got back to Bear Branch we passed the home of Jason’s sister, and her little boy of seven said he had gone down to stay with the sick one about two hours. To go and stay with a sick one is the one thing in neighboring that no one [who is] able to be about neglects in these parts.

I was not so tired at the end of the second day as I had been at the first and feel better acquainted with our immediate and far neighbourhood than I did before.

Two days after our return to the Cabin I had answered a call to Pine Mt. The nurse was absent on vacation and a new boy on trial as a possible pupil was sick from eating green apples. I remained over night and nussed him a few hours until it was evident that it was only a temporary illness. I wanted to call him a bunch of Hay instead of Hays Bunch, which is his real name. It was the first time he had been away from home and he was very homesick for his mother’s cooking. I found that he had a chronic ear disease and was deaf in that ear so it seemed best to send him home and have the ear attended to before he enters the school.

Neely came to see me a few days after our return bringing the new baby Dennis and expressing her desire to take up the washing again. Evert is to work for Mr S to pay for his school books. He did a good piece of work in cleaning up the brush in the little clearing by the garden to pay for his bed, a small used one that we offered so that he would not be obliged to sleep with his little sisters. Finley has been working a bit but he goes to court next week. Later:- his case has been postponed till the December session of the Court. Most people think that he will receive a stiff sentence. You remember he killed his nephew when drunk.

Mr S has started in with a singing lesson in both schools twice a week and the S S [Sunday School] at Bear Branch continues.

[*Before leaving Pine Mountain and the Line Fork Settlement, the Stapletons contributed to the construction of a new home for Neely and her children. They continued to check on the family status after departure from the area.]