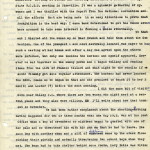 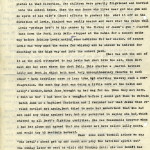 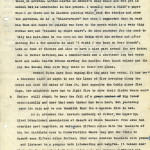 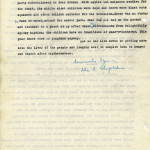 Various things have happened during the month. Mr. Stapleton went to a ministers’ meeting at Corbin and directly afterwards I attended the Ky. State W.C.T.U. meeting in Pineville. It was a splendid gathering of Ky. women and I was thrilled with the report from the National convention and, all the efforts that are being made in so many directions to prove that Prohibition is the best way. I came back determined to get the women around here aroused to take some interest In forming a Union eventually.

To that end I visited all the women up on Bear Branch and told them about the Convention. One of the youngest and most centrally located was eager to have such a meeting at her house and, after a day was agreed upon, the others were informed, but only one besides the hostess and myself appeared. More-over we sat together on the sunny porch and I began telling and reading items from the Life of Francis Willard and what might be the results if we could finally get some regular attendance. The hostess had never learned the 23rd Psalm so we began on that and she promised to teach it to her Bonnie ( 6) and Lester (7) before the next meeting.

I did the same bit of visiting down near Gilley P.O. where there are ten women who might meet at a central place and they also were willing. So I’ll write about how that turned out in November.

We had been rather complacent about the shooting. Nothing having happened for two or three months when one day Mr. S. [Stapleton] was at the Post Office when a boy of seventeen or eighteen began to quarrel with one of his pals and so threatened him with his gun that he had to leave. The same boy with another chum and a girl of fifteen came up the creek flourishing their pistols, and actually threatening two school boys whom they met. The boys had to take shelter behind some rocks. Mary Belle was riding behind Lewis who carried the pistol. The people say “He totes a gun” when it may be a pistol. When they got opposite Bear Branch school they got off the mules and lay down on a big rock. Miniard, the other boy, went to the school house to tell them that Lewis meant to kill a certain boy who he fancied was paying more attention to a girl with whom he had been going around some. Indeed, he meant to kill them both, he said, and shot off the pistol in that direction. The children were greatly frightened and hurried into the school house. Then the man Jason, who lives near, got his gun and in spite of his wife’s (Bert) efforts to prevent him, shot it off in the direction of Lewis. Miniard was really scared and went over the ridge with Lewis —perhaps bro’t [sic] to his senses by the firing of Jason’s gun — started back down the Fork. Mary Belle stopped at the Cabin for a moment on the way before Joining Lewis, asking for some medicine for her sister. Of course Lewis was very much the worse for whiskey and he should be indited [sic] for shooting on the high way and into the school yard.

That was not the end of it as the girl attempted to say Lewis had shot into the air, when Bert said she had seen where the shot fell. This started a quarrel between Lilly and Mary in which both used very uncomplimentary remarks to each other — both doubtless more or less true, but starting thereby such a con­flagration. The next day Bert was doing a little work at the Cabin and Lilly’s mother, Sarah Jane, brought up her nag for us. Thus, they met here. I felt as tho’ I had been in a tempest before I could get them to refrain. Sarah Jane is a baptised [sic] Christian and I reminded her that “Jesus when reviled reviled not again.” Bert tried to make her understand that she had not said any thing against her; but she persisted in saying she had, which stirred up all Bert’s fighting qualities. She was reasonable however when I had her alone and agreed that she should not have called Lilly names, and would try to restrain herself.

When some such turmoil arises we say, “The Devil’s about get up and shout and pray the terrible spirit out.” One Sunday later we went to visit old Granpap Hall. His son Bennet has completed a new house, that is, sufficiently so they could move in and live. Lora his wife is Jason’s sister so Bert was there helping them move.

They seemed glad to sit on the porch while we sang some gospel hymns and chatted of various things. But the men were shy and Bennet took his gun to shoot a squirrel that was defying the other men who were sitting there when we arrived. Little Kelvin is Bennet’s only child and not yet in school but is interested in his primer. I usually take a Child’s Paper when I go there and he listens quietly while I read the stories and show the pictures. He is a “black-a-more*” but when I suggested that he wash his face and hands he quickly ran down to the creek which is a very tiny stream now, and “cleaned up right smart”. [*This term was apparently used to mean “dirty child,” but is now considered offensive.] He then searched for the comb to tidy his hair. Once he was down at the Cabin with his mother and after sitting for a few moments he said “I wisht I was back on Bear Branch”.

Lora is fond of flowers and aims to have a nice yard around the new house. She is rather deformed, has a hunched-back and a shortened leg, but works hard and makes hearth brooms, carving the handles from black walnut and tieing [sic] the brooms from corn [broom corn] they raise on their own place.

Forest fires have been raging for the past two weeks. It has been a fearsome sight at night to see the lines of fire creeping along the crest and down the sides of Line Fork just opposite the Cabin since five days. Our neighbors have had to fight fire to save their fields where corn fodder still stands. We hear the fall of a big tree occasionally — and know that much timber has been lost. But yesterday came the rain and we are thankful that the dangerous fire is out.

Mr. S. [Stapleton] attended the Eastern Kentucky, or rather the Upper Ky., River Educational Association at Hazard at which teachers from some ten counties meet together. He walked some fifteen miles with the teachers of the two districts here to Cornettsville where they got the train to Hazard some fifteen miles further. Over seven hundred teachers were present and listened to a program both interesting and helpful. It rained continuously the day they left here which made the walking difficult but none of them were daunted. On their return Mr. S. packed a basket of concord grapes beside his other things. The grapes remind us so much of Michigan and in fact they came from Paw Paw, Mich., and such as we enjoyed in Oberlin, Ohio.

On Hallowe’en day we carried a little surprise party entertainment to Bear Branch with apples and molasses cookies for the treat. The middle sized children wore caps and there were black cats squakers [sic] and other follies suitable for the occasion. There was an obstacle race, or march, around the school yard. Then we all sat on the ground and listened to a ghost story after which refreshments [were served] from delightfully spooky napkins. The children have no traditions of Jack-o-lanterns. This year there were no pumpkins anyway.

And so our life moves on getting more into the lives of the people and longing ever to inspire them to hunger and thirst after righteousness.

LETTER from Dr. Ida Stapleton to Katherine Pettit – No Date. “I am enclosing a check…” 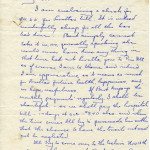 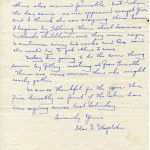 I am enclosing a check for $4.25 from Loretta’s bill. It is indeed wonderfully cheap for all she has had done. Bert simply cannot take it in, as, generally speaking she would never have done anything in that line had not Loretta gone to Pine Mt., so of course I am to blame and indeed I am appreciative as it means as much for Loretta’s future health, happiness, and, we hope, usefulness.

If Bert keeps up the monthly payments regularly, I shall be thankful, so we shall pay the hospital bill – 14 days at 60 [cents] – $8.40 – also, and when the time comes, I’ll try to persuade her mother that the chance to have the tonsils out must not be neglected.

I’ll try to come over to the lecture Nov 12th and possibly can get Bert and Mary Susan to go also. – and I’ll talk to Ora Dickson Smith about it. She may leave her babies with “Zion of the golden hair” – (actually it looks like yellow gold). I tried to talk up a women’s meeting for Bear Branch to meet at Ora’s house – being as that was most central – and she was eager and willing – the others also seemed favorable – but when the day came – no one appeared except “Zion” and I think she was staying there. However I began by telling them about Francis Willard’s childhood – and they were eager to continue every two weeks and Ora said she would try to get others to come.

Today I’m going to do the same thing down by Gilley – meeting at Joan Cornett’s. There are nine women there who might easily gather.

We are so thankful for the rain[?] – The fire directly in front of the Cabin has been raging since last Saturday.