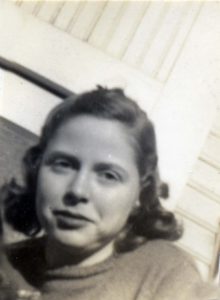 Barbara Spelman is the sister of John A. Spelman III, who was an instructor of art at Pine Mountain in 1937 to 1941. Always a champion of her talented brother, she stayed in contact with many of his friends and their in-common friends following his premature death in 1969. Many of these were friends she made during her two years’ stay at Pine Mountain as the Office bookkeeper.

Barbara graduated in 1938 from a large public school in Oak Park, Illinois, where she had the distinction of being one of the top students in her class of over 300. She spent two years studying to be a librarian at Beloit (Wisconsin) College and, at the same time, working in the school’s registrar office to pay for her tuition. In support of Barbara’s application for PMSS employment, one of her references, Beloit College’s Dean of Women, wrote:

Barbara is an exceptionally fine student, a real scholar. She has made straight A averages from the start, something which only the few exceptional ones get at Beloit. She does all kinds of work well, and everybody wants her. The registrar claims her for extra work in her office. the dean has asked for her to work in our office. I want her to take charge of the telephone job next year as she did this year. She manages about 12 college girls, assigns them telephone jobs every week in the various dormitories, sees that they are on time, checks on them. She manages to keep it all going and everybody happy which is unusual. I recommend her most heartily. She does everything well.

It was her remarkable talents and intelligence that her brother, John A. Spelman III, promoted when seeking a job for her at Pine Mountain. An entry on her job application explains her situation:

I am having financial difficulty in planning to go on with my college course. Rather than settle down in a large city and work in a business office, I would much rather enter some work where I would be of some use. My training does not permit a wide choice of occupations, but being of some worth in a mountain school interests me very much, especially where there is a need.

Barbara was hired as the Office bookkeeper and arrived on the PMSS campus from Oak Park on August 4, 1940. It was a job for which she had not been trained, but one in which she excelled. Although she was willing to volunteer at the School, she was paid  $55 a month in FY 1941-1942, “plus maintenance and laundry,” for her work. She was at PMSS for two years, the first year overlapping with her brother’s stay. Barbara became happily involved with the School’s activities, even participating in the School’s 1940 production of “H.M.S. Pinafore.”

Glyn Morris, then PMSS Director, wrote the following reference for Barbara soon before she left the School in 1942:

TO WHOM IT MAY CONCERN:
On July 15th Miss Barbara Spelman will have been at Pine Mountain Settlement School two years, where she has been employed as School bookkeeper, assuming heavy responsibility. Miss Spelman did her work efficiently and graciously. She was cooperative in all respects and did more than was required of her. She leaves Pine Mountain much against our wishes and we wish her every success.

Barbara returned to Beloit College, where she continued her training for a library career. On May 29, 1943, she married Collin F. Allen Jr. in Miami, Florida, who was from Cook County, Illinois. Her career and that of her husband were always centered around books. Collin served as a board member and president of the Michigan Association of Educational Representatives. Their home in Kalamazoo, Michigan, always had children coming and going. They had three daughters and one son and multiple grandchildren. Collin Allen died in June 2003 following a stroke. The two had enjoyed a marriage of 60 years.

During nearly 80 years of association with the School, Barbara remained in touch with many of the individuals she met during her brief time as an employee and later as a visitor.

Born on September 24, 1920, in Oak Park, Illinois, Barbara Spelman joined two sisters (Ellen G. and Marguerite) and one brother (John Adams III). Their parents were John Adams Spelman II and Florence Seis Spelman. Collin F. Allen Jr. was the son of Collin F. Allen Sr. and Mildred I. Allen. Born on April 5, 1920, in Minnesota, he was living in Cook County, Illinois, at the time of the 1930 and 1940 U.S. Censuses.