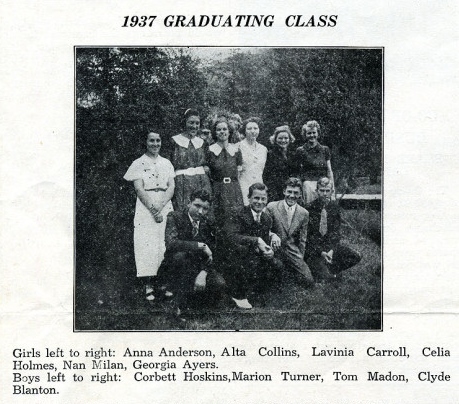 A graduating class photograph, a few letters, and the Staff Directory are the only resources found in the PMSS Collections to tell Anna Anderson’s story.

Anna was a student at the Pine Mountain Settlement School from 1934 to 1937. She remained at the School as a staff member, working with Chloe Smith at Big Laurel Medical Settlement, a PMSS satellite service, as a teacher of weaving until 1939. According to Fern Hall Hayes, Anna’s father worked at PMSS as a night watchman.

Fern Hall Hayes also recalled that Anna was encouraged by PMSS Director Glyn Morris to start a business, but that the endeavor was unsuccessful. It may have been “The Dyepot and Loom,” which was a letterhead on her letters beginning in November 1938. As late as February 1939, Glyn Morris asked for a dozen of her woven coverlets to take with him on a publicity tour of New England. He offered to get orders for her during his travels.

The Staff Directory indicates that she was also known as “Mrs. Erwin Gibbey” and her last known address was Frederick, Maryland.