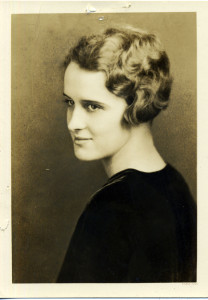 It was 1937 and Annie Lee Goins, armed with a B.S. from Berea (Kentucky) College that she earned two years before, was searching for employment. She applied to Pine Mountain Settlement School and, her credentials being acceptable, was offered a teaching position in home economics by Director Glyn Morris. At the same time, she was also offered a position by the district supervisor of the National Youth Administration in Louisville, a New Deal Agency that focused on providing work and education for young Americans. Miss Goins chose Pine Mountain School, possibly influenced by the secretary of Berea College’s Office of the Alumni, who wrote to Morris that “she would perhaps fit better into your type of organization than with the NYA.”

Our new Home Economics teacher, Miss Goins, was born and reared in [Morganton], North Carolina. She graduated from Berea in the year of 1935, and did post graduate work the following year. During the summer of 1935 she was dietitian at Perland Petters and Weavers. She was also a cashier for six months in a store, worked for some time in a tea room and gave private weaving lessons [in] North Carolina.

For the next two years and nine months she taught home management at the School. Her files include a two-page daily checklist that she compiled for young women that covered hair, teeth, sleep, washing, exercise, meals, cosmetics, nails, posture, and clothing. She also designed a test to check students’ knowledge of food, childcare and nursing and prepared lists of objectives for the various Units which she taught, such as Foods, Grooming, Child Guidance, Health, Home Management, and Clothing.

The PMSS Staff Directory lists her alternate identification as Mrs. Fred Carl Green. Her home address is listed as Morganton, Burkes County, North Carolina, which is also where she was born on December 14, 1911. Her father, a tannery laborer, was Adam Elam Goins and her mother, Mary Ann (Ross) Goins. She had two sisters, Lucy and Janie, and one brother, Roy. Annie Lee passed away in January 2006 in Morganton, NC.