This is the transcription by Margaret Motter of her apparent interview with a Civil War veteran, Martin Green. His opinions and observations cover the following subjects: 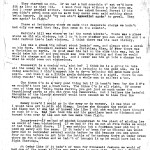 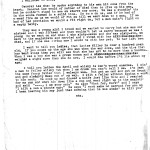 Martin Green and the Civil War

They starved us out. If we had a had somethin’ t’ eat we’d have fit as long as they did. I went four days without a bite down me. And I never growled either. General Lee asked General Forest if his men didn’t growl none and he said they never even said nothing about being hungry. He said “My men ain’t agoin’ to growl. They are agoin’ to fight.”

There at Gettysburg where we made that desperate charge we hadn’t had only one meal that day, that mess in the evenin’.

Melvin’s hill was where we had the worst kickin’. There was a place where we did win victory, but I don’t know whether you can call hit and the Cold Harbour Lee’s last victory. I think there was his last victory.

Lee was a great big robust stout lookin’ man, and always with a smile on his face. Stonewall Jackson was a Christian, Miss, if ever there was a Christian on earth. He would wear his hat on the side this way, but he would take hit off and you would see his lips moving and then he would blow his charge and go into it. And I never see him go into a charge but what he would come out victorious.

Roosevelt is a coming out, aint he? I think he is a going to take all the money he can take out. He is a bringing in the gold now. He is doing something I didn’t expect him to do – a bringing the gold back good again. And then I am a little grain dubious – hit’s a sight. There is men today runnin’ big business that takes a whole man to collect a tax.

The three C’s is a very good thing but if it hadn’t been for the 3 C’s we wouldn’t have had a road there. The three C’s is all right. Of course some of them say “Well, Uncle Martin, you got just as much under the Republican party as you did from the Democrats. But I believe the hateful thoughts of the bloody sheriff would have caused me to lose from the Republican party.

Mammy know’d I would go in the army or do worser. It was that or I would have got in with old Slemp. Louise she thought the world of old Slemp but if she had of knowed him like I did she wouldn’t have thought so much of him. He just took him and his garrilars back to Richmond and turned them over to Lee and let Lee make them fight.

At Cedar Lake if it hadn’t of been for Stonewall Jackson we would have had one of the worst killin’s you ever saw in your life. We was a fightin’ about forty-five thousand and only 500 of us. We sent for reinforcements and Longstreet come. Man, he come just his horses layin’ flat, his infantry double quickin’ behind. Just a few minutes after he got there at the raise he see’d we were a fightin’ a big army. We knowed what we were a doing. We found Sheridan and his whole crew there.

General Lee when he spoke anything to his men hit come from the heart. General Lee would of rather of died than to give up his men, but he couldn’t stand to see ’em starve any more. We was a standin’ there in the woods formed in a solid line. He come on us, and if he had of opened fire on us we would of fit ’em till we went down to a man. If we had of had provision we would a fit right on, but a man cain’t fight on an empty belly.

They was a young girl I loved and we wanted to marry but she was only sixteen and I was fifteen and they wouldn’t let us marry because we was that young. So we went on and when I was sixty-seven and she was sixty-six, we went to the magistrate and married and I lived with her to her last breath died, and if she was living now I would be with her yet.

I want to tell you ladies, that Louis Miller is over a hundred years old. If you count up the age she was when the war come, and the time that has went since then, you will see that she has got to be more than a hundred. When I was a boy she was a grown woman and weighed a sight more than she do now. I would die before I’d lie about my age.

I tell you ladies the devil and whisky is man’s worst enemies. I ain’t a man to foller whisky but when I am drunk you can’t tell I am. I’m just the same funny feller that I always was. But get me mad and get me drunk and god almighty keep out o’ my way. I kilt a feller without saying a word to him onct. He come up and drawed a knife just like that and I reached fer my gun and shot him down like a dog and went right up to the magistrate and said “—–, I am you man.” He says “What fer, Mart?” and I says “I kilt a man a minute ago.” He says “I won’t make no warrant for you when I been hearing him say just that morning that he was aimin’ to kill you.” etc.