SCRAPBOOK BEFORE 1929: James D. Burton “Pathfinders of the Cumberlands” 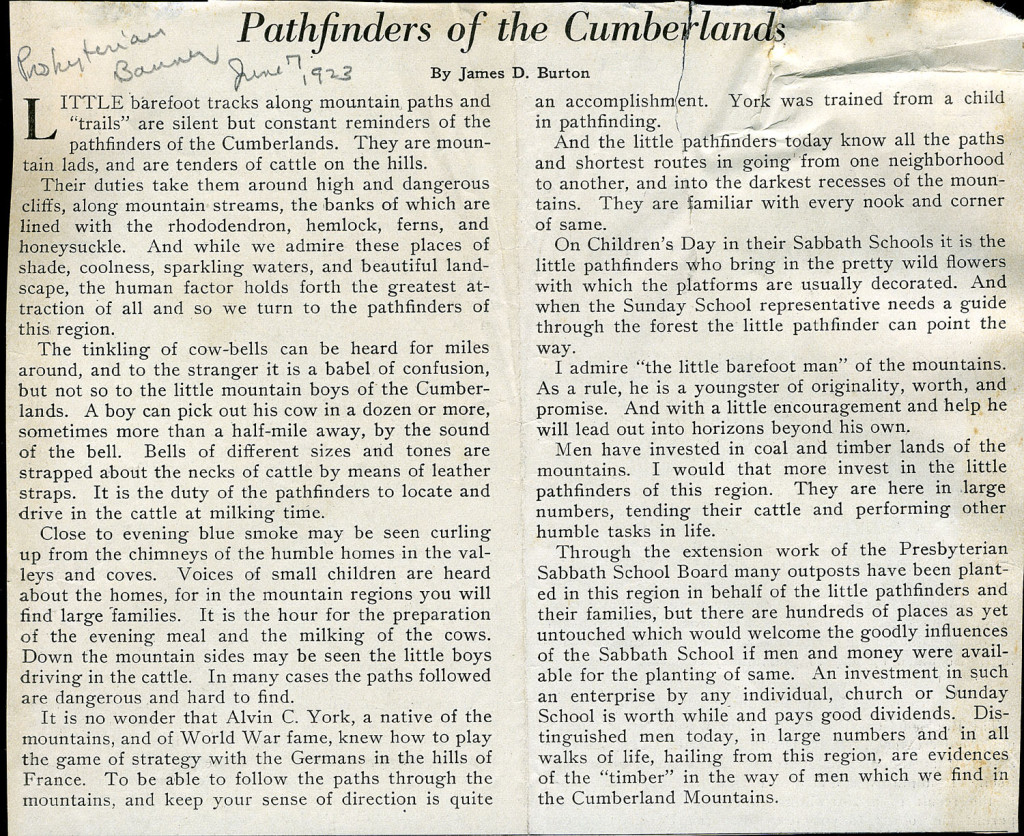 Pathfinders of the Cumberlands
By James D. Burton

LITTLE barefoot tracks along mountain paths and “trails” are silent but constant reminders of the pathfinders of the Cumberlands. They are mountain lads, and are tenders of cattle on the hills.

Their duties take them around high and dangerous cliffs, along mountain streams, the banks of which are lined with the rhododendron, hemlock, ferns, and honeysuckle. And while we admire these places of shade, coolness, sparkling waters, and beautiful land­scape, the human factor holds forth the greatest at­traction of all and so we turn to the pathfinders of this region.

The tinkling of cow-bells can be heard for miles around, and to the stranger it is a babel of confusion, but not so to the little mountain boys of the Cumber-lands. A boy can pick out his cow in a dozen or more, sometimes more than a half-mile away, by the sound of the bell. Bells of different sizes and tones are strapped about the necks of cattle by means of leather straps. It is the duty of the pathfinders to locate and drive in the cattle at milking time.

Close to evening blue smoke may be seen curling up from the chimneys of the humble homes in the val­leys and coves. Voices of small children are heard about the homes, for in the mountain regions you will find large ‘families. It is the hour for the preparation of the evening meal and the milking of the cows. Down the mountain sides may be seen the little boys driving in the cattle. In many cases the paths followed are dangerous and hard to find.

It is no wonder that Alvin C. York, a native of the mountains, and of World War fame, knew how to play the game of strategy with the Germans in the hills of France. To be able to follow the paths through the mountains, and keep your sense of direction is quite an accomplishment. York was trained from a child in pathfinding.

And the little pathfinders today know all the paths and shortest routes in going from one neighborhood to another, and into the darkest recesses of the moun­tains. They are familiar with every nook and corner of same.
On Children’s Day in their Sabbath Schools it is the little pathfinders who bring in the pretty wild flowers with which the platforms are usually decorated. And when the Sunday School representative needs a guide through the forest the little pathfinder can point the way.

I admire “the little barefoot man” of the mountains. As a rule, he is a youngster of originality, worth, and promise. And with a little encouragement and help he will lead out into horizons beyond his own.

Men have invested in coal and timber lands of the mountains. I would that more invest in the little pathfinders of this region. They are here in large numbers, tending their cattle and performing other humble tasks in life.

Through the extension work of the Presbyterian Sabbath School Board many outposts have been plant­ed in this region in behalf of the little pathfinders and their families, but there are hundreds of places as yet untouched which would welcome the goodly influences of the Sabbath School if men and money were avail­able for the planting of same. An investment in such an enterprise by any individual, church or Sunday School is worth while and pays good dividends. Distinguished men today, in large numbers and in all walks of life, hailing from this region, are evidences of the “timber” in the way of men which we find in the Cumberland Mountains.