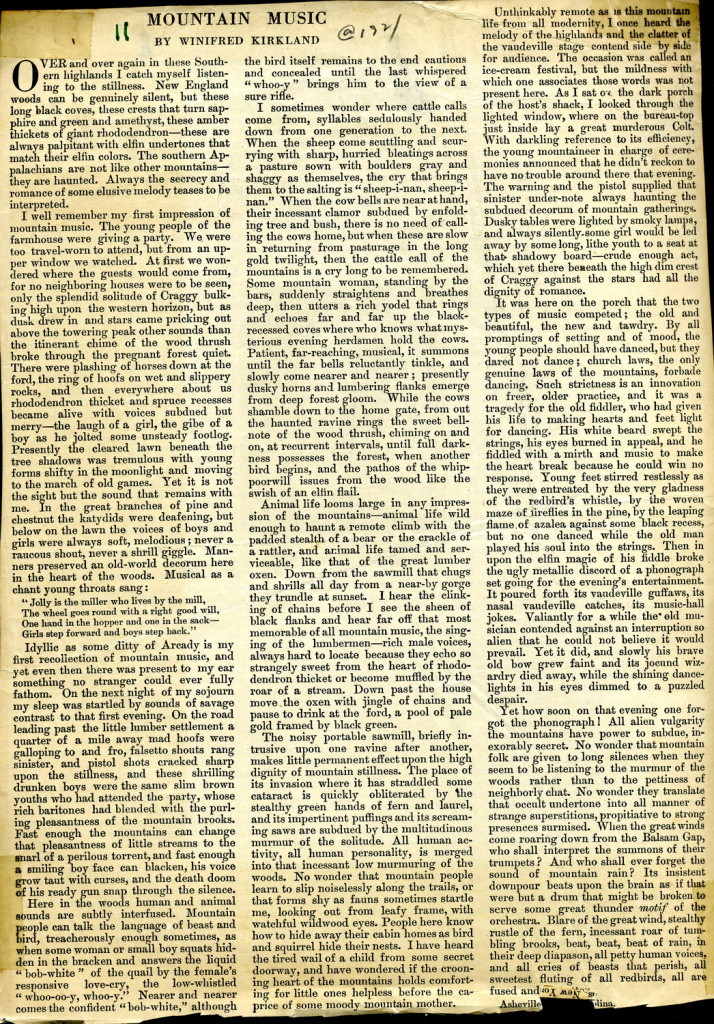 Over and over again in these Southern highlands I catch myself listening to the stillness. New England woods can be genuinely silent, but these long black coves, these crests that turn sapphire and green and amethyst, these amber thickets of giant rhododendron — these are always palpitant with elfin undertones that match their elfin colors. The southern Appalachians are not like other mountains — they are haunted. Always the secrecy and romance of some elusive melody teases to be interpreted.
I well remember my first impression of mountain music. The young people of the farmhouse were giving a party. We were too travel-worn to attend, but from an upper window we watched. At first we wondered where the guests would come from, for no neighboring houses were to be seen, only the splendid solitude of Craggy bulking high upon the western horizon but as dusk drew in and stars came pricking out above the towering peak other sounds than the itinerant chine of the wood thrush broke through the pregnant forest quiet. There were plashing of horses down at the ford, the ring of hoofs on wet and slippery rocks, and then everywhere about us rhododendron thicket and spruce recesses became alive with voices subdued but merry — the laugh of a girl, the gibe of a boy as he jolted some unsteady foot log. Presently the cleared lawn beneath the tree shadows was tremulous with young forms shifty in the moonlight and moving to the march of old games. Yet it is not the sight but the sound that remains with me. In the great branches of pine and chestnut the katydids were deafening, but below on the lawn the voices of boys and girls were always soft, melodious ; never a raucous shout, never a shrill giggle. Manners preserved an old-world decorum here in the heart of the woods. Musical as a chant young throats sang:

“Jolly is the miller who lives by the mill,
The wheel goes round with a right good will,
One hand in the hopper and one in the sack —
Girls step forward and boys step back.”

Idyllic as some ditty of Arcady is my first recollection of mountain music, and yet even then there was present to my ear something no stranger could ever fully fathom. On the next night of my sojourn my sleep was startled by sounds of savage contrast to that first evening. On the road leading past the little lumber settlement a quarter of a mile away mad hoofs were galloping to and fro, falsetto shouts rang sinister, and pistol shots cracked sharp upon the stillness, and these shrilling drunken boys were the same slim brown youths who had attended the party whose rich baritones had blended with the purling pleasantness of the mountain brooks. Fast enough the mountains can change that pleasantness of little streams to the snarl of a perilous torrent, and fast enough a smiling boy face can blacken, his voice grow taut with curses, and the death doom of his ready gun snap through the silence.

Here in the woods human and animal sounds are subtly interfused. Mountain people can talk the language of beast and bird, treacherously enough sometimes, as when some woman or small boy squats hidden in the bracken and answers the liquid “bob-white” of the quail by the female’s responsive love-cry, the low-whistled “whoo-00-y, whoo-y.” Nearer and nearer comes the confident “bob-white,” although

the bird itself remains to the end cautious and concealed until the least whispered “whoo-y” brings him to the view of a sure rifle.
I sometimes wonder where cattle calls come from, syllables seduously handed down from one generation to the next. When the sheep come scuttling and scurrying with sharp, hurried bleating across a pasture sown with boulders gray and shaggy as themselves, the cry that brings them to the salting is “sep-i-nan, sheep-i-nan.” When the cow bells are near at hand, their incessant clamor subdued by enfolding tree and bush, there is not need of calling the cows home, but when these are slow in returning from patronage in the long gold twilight, then the cattle call of the mountains is a cry long to be remembered. Some mountain woman standing by the bars, suddenly straightens and breathes deep, then utters a rich yodel that rings and echoes far and far up the black-recessed coves where who knows what mysterious evening herdsmen hold the cows. Patient, far-reaching, musical, it summons until the far bells reluctantly tinkle, and slowly come nearer and nearer; presently dusky horns and lumbering flanks emerge from deep forest gloom. While the cows shamble down to the home gate, from out the haunted ravine rings the sweet bell-note of the wood thrush, chiming on and on, at recurrent intervals, until full darkness possesses the forest, when another bird begins, and the pathos of the whippoorwill issues from the wood like the swish of an elfin flair.

Animal life looms large in any impression of the mountains — animal life wild enough to haunt a remote climb with the padded stealth of a bear or the crackle of a rattler, and animal life tamed and serviceable, like that of the great lumber oxen. Down from the sawmill that chugs and shrills all day from a near-by gorge they trundle at sunset. I hear the clinking of chains before I see the sheen of black flanks and hear far off that most memorable of all mountain music, the singing of the lumbermen — rich male voices, always hard to locate because they echo so strangely sweet from the heart of rhododendron thicket or become muffled by the roar of a stream. Down past the house move the oxen with jingle of chains and pause to drink at the ford, a pool of pale gold framed by black green.

The noisy portable sawmill, briefly intrusive upon one ravine after another, makes little permanent effect upon the high dignity of mountain stillness. The place of its invasion where it has straddled some cataract is quickly obliterated by the stealthy green hands of fern and laurel, and its impertinent puffings and its screaming saws are subdued by the multitudinous murmur of the solitude. All human activity, all human personality, is merged into that incessant low murmuring of the woods. No wonder that mountain people learn to slip noiselessly along the trails or that forms shy as fauns sometimes startle me, looking out from leafy frame, with watchful wildwood eyes. People here know how to hide away their cabin homes as bird and squirrel hide their nests. I have heard the tired wail of a child from some secret doorway, and have wondered if the crooning heart of the mountains hold comforting for little ones helpless before the caprice of some moody mountain mother.

Unthinkably remote as is this mountain life from all modernity, I once heard the melody of the highlands and the clatter of the vaudeville stage contend side by side for audience. The occasion was called an icecream festival,but the mildness with which one associates those words was not present here. As I sat on the dark porch of the host’s shack, I looked through the lighted window, where on the bureau-top just inside lay a great murderous Colt. With darkling reference to its efficiency, the young mountaineer in charge of ceremonies announced that he didn’t reckon to have not trouble around there that evening. The warning and the pistol supplied that sinister under-note always haunting the subdued decorum of mountain gatherings. Dusky tables were lighted by smoky lamps, and always silently some girl would be led away by some long, lithe youth to a seat at that shadowy board — crude enough act, which yet there beneath the high dime crest of Craggy against the stars had all the dignity of romance.

It was here on the porch that the two types of music competed; the old and beautiful, the new and tawdry. By all promptings of setting and of mood, the young people should have danced, but they dared not dance ; church laws, the only genuine laws of the mountains, forbade dancing. Such strictness is an innovation on freer, older practice, and it was a tragedy for the old fiddler, who had given his life to making hearts and feet light for dancing. His white beard swept the strings, his eyes burned in appeal, and he fiddled with a mirth and music to make the heart break because he could win no response. Young feet stirred restlessly as they were entreated by the very gladness of the redbird’s whistle, by the woven maze of fireflies in the pine, by the leaping flame of azalea against some black recess, but no one danced while the old man played his soul into the strings. Then in upon the elfin magic of his fiddle broke the ugly metallic discord of a phonograph set going for the evening’s entertainment. It poured forth its vaudeville guffaws, its nasal vaudeville catches, its music-hall jokes. Valiantly for a while the old musician contended against an interruption so alien that he could not believe it would prevail. Yet it did, and slowly his brave old bow grew faint and its jocund wizardry died away, while the shining dance-lights in his eyes dimmed to a puzzled despair.

Yet how soon on that evening one forgot the phonograph! All alien vulgarity the mountains have power to subdue, inexorably secret. No wonder that mountain folk are given to long silences when they seem to be listening to the murmur of the woods rather than to the pettiness of neighborly chat. No wonder they translate that occult undertone into all manner of strange superstitions, propitiative to strong presences surmised. when the great winds come roaring down from the Balsam Gap, who shall interpret the summons of their trumpets? And who shall ever forget the sound of mountain rain? Its insistent downpour beats upon the brain as if that were but a drum that might be broken to serve some great thunder motif of the orchestra. Blare of the great wind, stealthy rustle of the fern, incessant roar of tumbling brooks, beat, beat beat of rain, in their deep diapason, all petty human voices, and all cries of beasts that perish, all sweetest fluting of all redbirds, all are fused and [….toy?].