[NOTE: Letters from PMSS staff in the PMSS Collections are carbon copies, typewritten, unsigned, and meant for the Office files. The original signed copies were sent to the correspondents. All letters and reports are typewritten unless indicated otherwise. The following list of contents is in chronological order and not necessarily in the order of the image numbers. The last name, “McIntire,” was also spelled “McIntyre” on some documents.]

003 August 15, 1933. Handwritten letter to Mr. (Glyn) Morris from Emily Hill, stating that her two nieces will enter PMSS August 20, 1933; asks Morris to apply her July work earnings to their entrance fees and she will pay the remainder.

004 February 1, 1934. Handwritten letter to Morris from Emily Hill, writing from a hospital in Harlan, Ky. She thanks him and the doctor for caring for Peggie (sic), who was “very sick” in the hospital for 3 days.

005 May 11, 1936. A typewritten note on PMSS letterhead. “Peggy McIntyre (sic): We understand that you will live at Mrs. Creech’s home, and will come to the school to work on your debt during the last eight weeks of the summer, July 5 – August 29.” (Handwritten signature and notation in bottom margin: “Peggie McIntire – I decided to stay only six weeks and stay down here if you have any room.”)

007-007a December 23, 1936. Two-page letter to Mrs. Columbus Creech, Pine Mountain, Ky., from (unsigned, likely Arthur Dodd), Principal, providing a summary of the development of Audrey and Peggy, which is sent to parents or guardians according to school policy. He quotes from teachers’ evaluations of the girls’ work to illustrate problems with their subjects and attitude. He mentions Audrey’s improvement socially. He then quotes statements about Peggy’s work, describing her as pleasant and willing to work hard; “lacks enthusiasm but is conscientious and helpful to improve herself.” Peggy had difficulty handling several subjects.

Audrey is described as putting a “great deal of time and effort in her work,” but that her input is “superficial” and “second-hand.” She was very cooperative in industrial work and has learned much in the practical arts, such as housekeeping. However, “The Faculty Committee on Student Entrance thinks that the time has come for Audrey to put this practical knowledge to work if possible. …Audrey has achieved to the limit of her ability at Pine Mountain. It is with regret that we see her go, yet realizing at the same time that we have little more to offer her.”

Buster is making progress in some areas, but “in his other work, and in his social relationships with the group he has not made very good progress. Perhaps this will come as he grows older, and more conscious of others about him.”

009 August 4, 1937. To Miss Peggy McIntyre, Pine Mountain Ky., from Esther E. Weller, Student Counselor, inviting her to arrive on August 28 for the coming school year. Asks for confirmation that she is attending and for $11 “entrance and breakage fee.”

010 October 14, 1938. To Mrs. Emily Creech from Esther Weller, asking if Peggy will be able to return this semester after her months-long absence due to illness. “She is quite far behind in school work due to over a year’s absence….”

011 October 27, 1938. To Mrs. Columbus Creech from (unsigned), Business Manager, writing about Audrey and Peggy McIntyre’s bill. As their guardian, Mrs. Creech has no obligation to pay their school bills, but could she supply the school with her excess produce (for either the kitchen or barn) toward the accounts?

012 March 14, 1939. To Buster McIntyre from (unsigned), Business Manager, who heard from Mrs. Creech that Buster “would like to begin work on your sisters’ debt.”

[NOTE: The images of the following school records [013 – 027a] are considered private material and are not generally publicly displayed. Their access may be provided on request, pending approval of Pine Mountain Settlement School and the archivist of the PMSS Collections. Contact the main PMSS Office for information.] 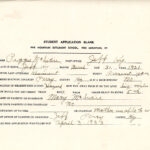 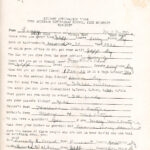 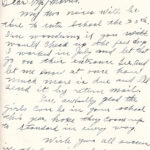 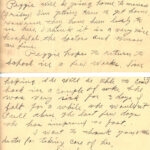 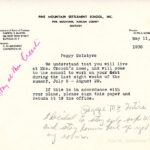 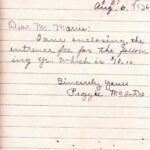 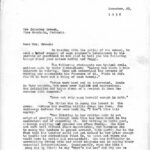 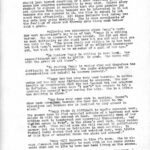 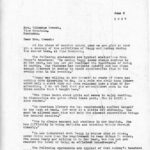 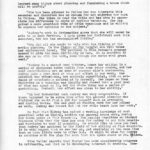 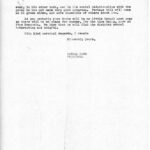 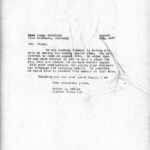 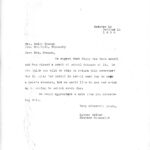 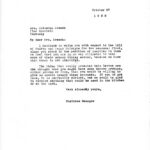 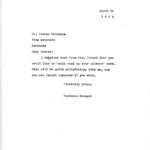