A Letter from a Community Resident and Longtime PMSS Supporter
to Marguerite Butler, 1924

[NOTE: Transcription has been slightly edited, but most misspellings have been kept intact.]

Dear Marguerite
I received your letter of June 22 and should wrote you before now but I have been verry busy. As you know that I always aim(?) to let me tell it but Delia does not always tell it that way. I have been looking after Queen [horse] since you left as I did when you went over sea and will try to look after her as long as you keep her in reach of me. It looks like I will have to, for Miss Medcalf [Anne Ruth Medcalf, Community Nurse, Line Fork] rode her to Whitesburg and went to the Blacksmith there to get a shoe fixed but, no, Queen would not let [013b] him tuch her. After half an hour she brought her back for me to fix up and you know that makes me kindly proud of myself. I think that I will shoe for Miss Medcalf and Miss Smith [Elizabeth G. Smith, teacher, Line Fork] as long as they stay at Line Fork and when some new workers come in, think that I will try to give the job to some one else.

We are so glat that your mother is so well, hope that she can hold out. I will bet that your father has a good time at camp. I would live to be with him for a few days. I think that your father will grow up if you will just give him time. You know some Boys grow slow.

[013c] Delia [Henry’s wife] has started saving her pennies right now. She could not write you until some one else wrote, so she could put her letter in. I guess that she is telling you all of the news for she knows a lot more than I. As you know that women always do. Mother [Sally Dixon Creech] is not much well but able to be up most of the time. Doubtless you can give Ethel [Ethel de Long Zande, PMSS Co-director] all of Pine Mt news when you get Delia’s letter.

Best regard to all of your family. I remain ever your friend.
Henry C. Creech 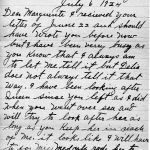 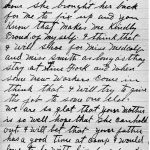 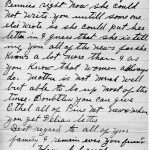