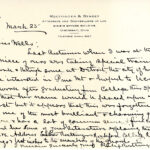 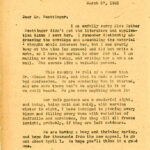 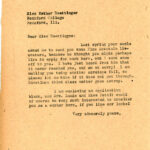 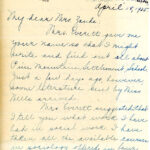 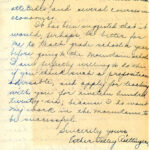 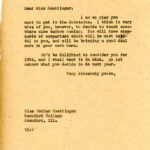 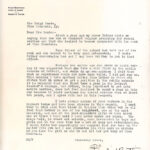 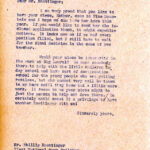 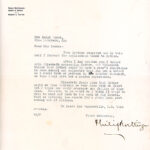 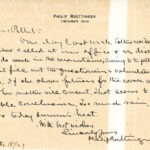 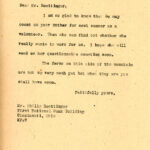 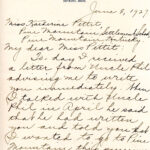 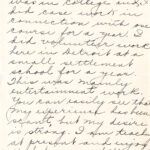 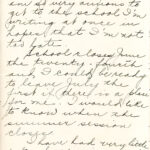 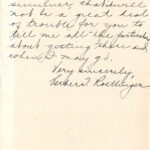 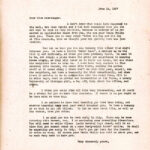 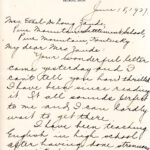 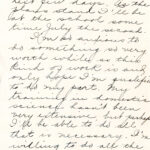 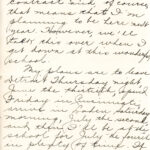 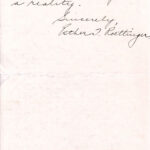 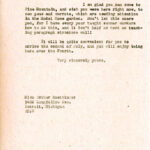 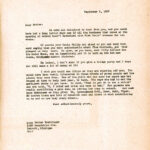 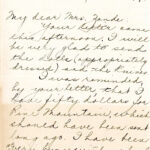 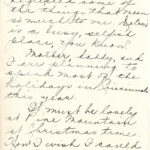 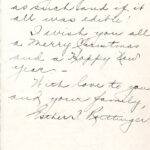 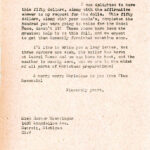 [Note: Letters from PMSS staff in the PMSS Collections are carbon copies, typewritten, unsigned, and meant for the Office files. The original signed copies were sent to the correspondents. The initials at the bottom left of most PMSS letters indicate the writer (along with initials of the secretary). For example, “EZ” are the initials for Ethel de Long Zande, “KP” refers to Katherine Pettit, and “EKW” to Evelyn K. Wells. Letters from Esther Roettinger are handwritten. The following list of contents is in chronological order and not necessarily in the order of the image numbers.]

[001] March 25, [no year]. To Evelyn K. Wells from Philip Roettinger [PMSS Trustee] on letterhead for “Roettinger & Street, Attorneys and Counsellors at Law, Cincinnati, Ohio.” Describes his niece, Esther Roettinger, who is studying social work and is interested in PMSS work after she graduates from college in the spring. “Esther is one of the most brilliant & charming girls I have ever known & has a lot of common sense.” He asks that PMSS send literature to her at Rockford ((IL) College.

[003]  March 27, 1925. To Esther Roettinger at Rockford (IL) College, from EKW (Wells), who is enclosing PMSS literature and an application blank.

[004], [004a] April 18, 1925. To Mrs. Ethel de Long Zande from Esther Talley Roettinger, who, at the suggestion of Mrs. Everett, is writing to describe her social work experience, which is “all the available courses in sociology offered in four years of college.” Asks if she should teach grade school a year before applying to PMSS.

[005] April 23, 1925. To Esther from EZ (Zande), who agrees that Esther should teach elsewhere first. “You will have standards of comparison which will be most helpful to you and will be bringing a good deal more to your work here.” Asks her to apply in 1926.

[006] July 8, 1925. To Zande from Mr. Roettinger, who did not agree that Esther’s working elsewhere first would be useful. In order to teach in public schools, she is required to attend one year at the Detroit Teacher’s College; she doesn’t want to postpone her social service work at least two years. Mr. Roettinger describes her qualities and urges Zande to accept her “as she is. And let her get busy at Pine Mountain.”

[007] July 10, 1925. To Mr. Roettinger from EZ (Zande), who will accept Esther this year and suggests that she work at Big Laurel to “help with the little children in day school and have sort of continuation school for the young people who are getting restless but who cannot very well be taken in up her until they have had a little more work.”

[008] July 14, 1925. To Zande from Mr. Roettinger, talked with Elisabeth [Elisabeth Roettinger, his daughter, who was a PMSS worker in the summers of 1914 & 1915 and visited often with her father.] Elisabeth “thinks that Esther ought to have a year’s experience in some school” in a small town or country district, fearing Esther would be “very homesick” at Big Laurel, which is “entirely too remote for a young girl just coming out of college.”

[009] April 18, [no year]. To Katherine Pettit from Mr. Roettinger, who had discussed Esther’s desire to do work in the mountains and decided that she would volunteer for the next summer. “If she shows fitness for the work and wishes to do so, her mother will consent.”
[010] April 20, 1927. To Mr. Roettinger from KP (Pettit), welcoming Esther as a volunteer next summer.

[011] through [011c] June 8, 1927. Four-page letter to Pettit from Esther T. Roettinger in Detroit, MI, [011, page 1] who had just found out from her “Uncle Phil” that he arranged for her to work at PMSS this summer. [011b, page 2] She can leave for PMSS on July 1. “I have had very little actual experience in social work.” [011a, page 3] Besides college courses, she “did case work in connection with one course for a year … volunteer work in Detroit at a small settlement school for a year, …mainly entertainment work. … I am teaching at present and enjoy it but my ambition is to get to Pine Mountain. [011c] Asks for details.

[012] June 14, 1927. To Esther from [truncated page], describing a vacancy at the “model home, a cottage up on the hill by our infirmary…. We want it to be, not simply a place where the girls get experience in keeping house…, as they will later on in their own homes, but one where the neighbors love to drop in. I have been very anxious to find somebody this summer, who would live there, canning the garden stuff…, see the neighbors, and have a tea-party for them occasionally….” Additional activities may be filling in when the Far House housemother takes a day off, help in the office, and possibly some tutoring. Asks for more about her teaching, as there will be one or more vacancies to be filled. Tells her to arrange with Wilson Lewis to help with getting to PMSS.

[013] through [013c] June 18, 1927. To Zande from Esther. [013, page 1] “It all sounds perfect to me and I can hardly wait to get there.” She has been teaching high school English “after having done strenuous substituting in most every subject….” [013b, page 2] She received her permanent contract for teaching next year. Describes her travel plans, and will arrive July 4. [013a, page 3] “I’m so anxious to do something so very worthwhile as this kind of work is and only hope I’m qualified to do my part.” [013c] “[I] will be so glad to have this long dream a reality.”

[015] September 7, 1927. To Esther in Detroit from EZ (Zande). “We were all delighted to hear from you….” Mr. Roettinger wrote that Esther was “enthusiastic about Pine Mountain, and that pleased me very much.” He also sent $50 for the Model Home which is being used for work on the two new rooms. Describes the students returning to school.

[016] through [016b] December 12, 1927. To Zande from Esther, who is “busy with school, primarily, the direction of two plays, playing the lead in another and much social gaiety…. It must be lovely at Pine Mountain at Christmas time. How I wish I could be there, not only then, but so many times. …” Encloses $50 for PMSS.