By 1934-35 Alice Cobb had ironed out some of the wrinkles in her Sunday School classes and was experimenting with ways to open up conversations and world outlooks. Her Sunday School classes at Divide, a community near the Pine Mountain Settlement School was comprised of a mixture of grade-school and high-school-age children. Staff participation in the community churches through Sunday Schools was one of the most effective ways the Settlement School found to reach out to the broader community and to meet the people where they lived — in their religion.

The Sunday School classes, like those at Divide, were part of the efforts of the Pine Mountain Settlement School to reach out to the local community and to continue the important processes of providing medical and social service to the families in their service area. Divide Sunday School was held in the Divide School building, as were the regular Divide church services. As recorded in the writings, stories, and records of the School, the staff often found that the process of educating was not a process of imposing ideas on a culturally isolated community, but a realization that their world, that of the educator, was far less rich than they imagined and that a rich education came from streaming knowledge in both directions. What Alice Cobb learned about herself, her world and the imagination, creativity, and sophistication of religious ideas from her students was sometimes startling and refreshing and, certainly, never dull. It was the well from which she drew inspiration for most of her life.

The exchange in this group of children in the Divide Sunday School is a far cry from the exchange that Alice Cobb had with little Virginia Callahan in her Pre-Christmas Sunday School, one of her first attempts to teach a Sunday School at Pine Mountain. In the Divide class, instead of trying to draw the children into her religious beliefs, she gives them permission to find their own way in a simple yet very complex exchange of ideas about the creation of the world. Her notes on the Sunday School exchanges follows. 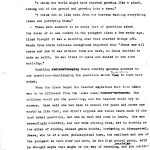 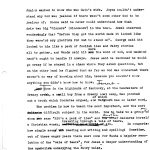 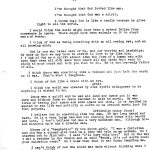 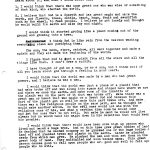 [QUESTION: How I would think the world was made if I hadn’t read or heard about it, and what I think about God.]

“I think the world might have started growing like a plant coming out of the ground and growing into a tree.”

“I think God is like rain from the heavens washing everything clean and purifying them.”

These were answers to an early list of questions asked the dozen or so new comers in the youngest class a few weeks ago. Lloyd thought it was a shooting star that started things off. Wanda, from stern Holiness background reported that “JesUs saw all space and saw it was without form and dark, so Jesus decided to make an earth. He was tired of space and wanted to see some activity.”

Humbling, these starkly genuine answers to our questions — challenging the questions which the children, in turn, have asked.

When the class began the teacher [Alice] explained that this class was to be different from the usual ones — The children would ask the questions, and the teacher would try to answer. Sara said she had been to school for years and never saw anything like that, and didn’t suppose she would learn much if she just asked questions, and she, in fact, had come to learn. She was exceedingly doubtful, and her wide shining face, set to worship at the altar of wisdom, showed grave doubts bordering on disapproval. Jesse, who is of a more philosophical turn, the smallest and one of the youngest we have ever had here, in the high school group, said he thought maybe that might be one way of learning, leastwise, and you couldn’t never find out much without asking. 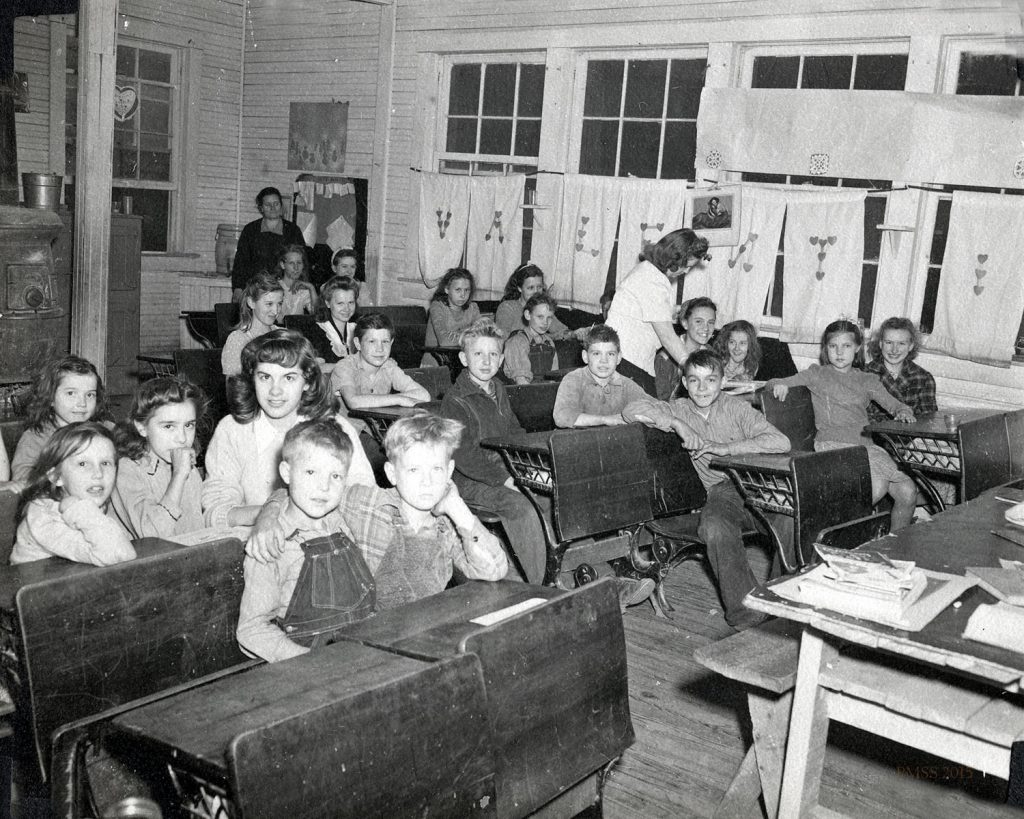 Once given free reign, the questions flew, and the discussion after one or two hesitant, arid days, waxed almost too brisk for the teacher’s comfort. Junior wanted to know who was Cain’s wife. Joyce couldn’t understand why God was jealous if there wasn’t some other God to be jealous of. Boone said he never could understand how Noah [put] “two big “dinnars” (dinosaurs) In the boat. Jewel observed wonderingly that “before they got the world made, it looked like they weren’t any platform for God to stand on.” George said hit looked to him like a pack of foolish lies and fairy stories all to gather, and Wanda said it were the word of God, and mankind hadn’t ought to handle it noways. Jesse said he reckoned he would go crazy if he stayed in a class where they asked questions, but on the other hand, he figured that as far as God was concerned there weren’t no way of knowing about him because you couldn’t know anything you didn’t know how to know.

Thus, in the highlands of Kentucky, at the headwaters of Greasy Creek, a small boy from a dreary coal camp, has pointed out a truth which Socrates argued, and of which Niebauer [Reinhold Niebauer, Theologian] has no later word.

The problem is how to teach the most important and the most difficult subject in the world. How to talk to a group, one of whom says “Hit’s a pack of lies,” and the other declares herself a Christian woman, “traveling through a vale of tears.” In comparison how simple seems reading and writing and spelling! Sometime, out of these eager years, there must come for Wanda a happier resolution of the ‘vale of tears,’ for Jesse a deeper understanding of the symbolism underlying the ‘fairy tales.

In preparation for this progress in thought, we have our plan for our “Universal Church” in which our students may participate as members, after an experience in the pastor’s class for older children.

[The questions asked last week and the answers by the students.]

QUESTIONS: How I would think the world was made if I hadn’t read or heard about it, and what I think about God.

“I would think that there was some great one who was wise or something of that kind, who started the world.”

“I believe that God is a Sperrit and has great magic and made the earth, put flowers, trees, cattle, beast, hogs, fruit and swordfish, [and] such as the wheel, to feed people. I believe he got lonely and thought he would build the earth and make day and night.”

“I would think it started growing like a plant coming out of the ground and growing into a tree.”

“I think God is like rain from the heavens washing everything clean and purifying them.”

“The sun, the moon, stars, rainbow, all went together and made a spirit and they all made the beginning of the world.”

“I figure that God is just a spirit from all the stars and all the things like that. I can’t draw a spirit.”

“I have thought of God as a man, or as a sun, but I think most of all you learn about God through a feeling in your heart.”

“I would think that the world was made by a man who had great powers, and I believe he was a man.”

“I would think that the world was just a piece of a planit that had maybe broke off and was slung into space and stopped here where we are and where we [came to ]the earth. And maybe some of the inhabits of the planit was on the part of it that was broke off. Maybe their was a great man or beast that was magic or a Great God and because this part of the planit got so evil he made this part brake off. And maybe there was a few religious people on the same part, and he thought he would make another world. so the evil ones would not mix with the religious ones of his and when a certain time come he would come and get the ones that is not evil. But maybe he meant he would not live always but he would hand his magic down in his relatives that would keep his promise.”

“I imagine God as just space.”

“These are the different ideas I’ve had about God:

“I thought that God was a spirit.”

“I think that God is like a candle because he gives light to all the world.”

“I think of God as being something with an all-seeing eye, and an all-knowing mind.”

“God is one who takes care of us, and our worries and hardships. He made us that we may have to strive to live to be like him. I think of God as a spirit almost like the form of a human man with eyes that sees all; with ears that hears all; and hands that want to knock at your heart and tell you what to do. He is the heavenly father of all.”

“I think there was something like a volcano and just left the earth as it was. That’s what I imagined.”

“I think of God like a brain with an eye.”

“I think the world was created by some great spirit with power to do anything it wished to do.”

“Jesus was a spirit and he saw all land and space and it was dark and without form so Jesus decided to make an earth. He was tired of seeing just space and more space and land. So he decided he wanted to see life and activity on earth so he created earth just for that purpose.”

“I believe God is something like the son (evidently means Jesus) He has long beard and hair. He is a very large man and his shining face beams with beauty and love. I don’t believe God was a very handsome man. Although Love and kindness made him a lovable man.”

Story of a “temptation” by the above girl:

“I was a Christian and one day a sinner girl told me a very bad tale on my mother. So I started out to find her. I said “I’ll sure whip her.” But on the way I met a brother in the Church and he said ‘Wanda, its not worth losin’ your salvation over.’ So I knew then that it was Satan tempting me.”

“I can’t think of how the world was made without thinking what I have heard already.”

BACK TO: ALICE COBB GUIDE TO WRITINGS, STORIES, AND LETTERS