ALICE COBB STORIES Hike to Napier and Gabes Branch, May 1934

Mrs. Baird [Lexine Baird] and I hiked to Napier and then to the Gabes Branch Falls — yesterday — a twenty-mile hike [round-trip from Pine Mountain Settlement School], but not at all tiring. Had dinner at Sarah Jane Turner’s house. Visited nearly all the houses we came to along the way.

We started at 5:30 and stopped at Medical Settlement for breakfast, then walked along, stopped at Becky May‘s and played with the baby. We walked up the tracks with Stacy Ellen Boggs.

Grace and Rachael and Bill Lewis came in as we reached Lewises. They urged us to stay on but we were bound for Napier. When we finally reached the place we found the women folk had gone to church so crossed the swinging bridge from the store to the house and sat on the grass by the pump till they came from the meeting. They brought with them half the neighborhood — Chester Combs and his father, the Engle girls, Walter Patterson. The dinner was a banquet which we ate in shifts, the groups taking each others’ places as they finished. After we finished we sat out on the back porch for some moments with Mrs. Turner. She told us of her quilt work — the blazing star pattern, etc. and about the school teacher who “was an extra good teacher while he was there but he had more holidays than any teachers I ever seed!”: about the hog that bit folks till he had to have a separate house built for him and the other hog that “didn’t trouble no body but [it] fit horses so it had to be killed.”

We hated to leave but did leave rather early to get to the falls [Gabes Branch Falls]. It is a perfectly beautiful cascade dropping into a bowl so round it doesn’t seem natural. Looks like a musical comedy setting I have seen, the moon here just as unreal as that too. 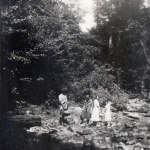 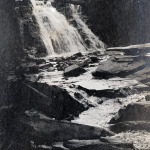 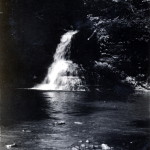 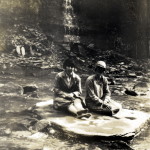 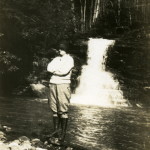