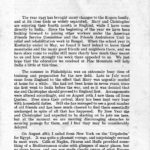 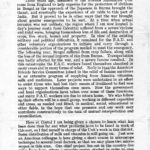 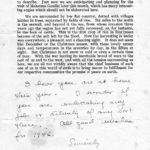 The year 1945 has brought many changes to the Rogers family, and at its close finds us widely separated. Mary and Christopher are enjoying their fourth month in England, while I have come directly to India. Since the beginning of the year we have been looking forward to joining other workers under the American Friends Service Committee and the Friends Ambulance Unit in relief and rehabilitation work in Bengal. When the school year in Kentucky ended in May, we found it hard indeed to leave those mountains and the many good friends and neighbors there, and we have since come to realize still more clearly how much they meant to us and how strongly the work there appealed to us. We just hope that the education we received at Pine Mountain will help India a little at this time.

The summer in Philadelphia was an extremely busy time of training and preparation for the new field. Late in July word came from England to the effect that Mary was urgently needed at home for a while. She had not been home in seven years, since she first went to India before the war, and so it was decided that she and Christopher should proceed to England first. Arrangements were altered accordingly, and on August 20th I saw them off from Quebec. Ever since their arrival, Mary has been kept very busy with household duties. Still she has managed to see a good number of old friends and has been much cheered to find them essentially unchanged in spite of all that has happened. By New Year she and Christopher had expected to be starting on to join me here, but at the moment we are meeting discouraging obstacles in securing passage for them, and I fear they may be considerably delayed.

On August 28th I sailed from New York on the ‘Gripsholm’ for Egypt. It was quite a pleasant voyage, and surprisingly normal in most ways. Calls at Naples, Piraeus and Haifa provided something of a Mediterranean cruise with glimpses of many places, but no shore leaves, and one was made clearly aware of what Europe had been through and still had to face. Among those disembarking at Alexandria were 70 people bound for India, and the nine days I spent in Egypt were largely taken up with the problems of securing passage on to India and the transfer of baggage via Cairo to Port Said. Yet from the train one is thoroughly impressed with the…

…fertility of the Delta, and the privilege of visiting the pyramids at sunset and by moonlight leaves one without words. On Sept. 27th, with a number of others, I was fortunate to find myself on a British troopship heading through the Suez Canal for India, where we landed at Bombay only nine days later. Two more days by train brought me right across India to our headquarters at Calcutta.

Three years ago, members of the Friends Ambulance Unit came from England to help organize for the protection of civilians in Bengal as the approach of the Japanese in Burma brought the threat, and eventually the experience of air raids to this part of India. But it proved to be in other ways that the war brought about greater emergencies to be met. At a time when actual invasion was not unlikely, the region where I am now located (a day’s journey south from Calcutta) suffered from a severe cyclone and tidal wave, bringing tremendous loss of life and destruction of crops, live stock, homes and property. In view of the existing military and political difficulties, it remained for the F.A.U. and other voluntary organizations to initiate and carry through a considerable portion of the program needed to meet the emergency. The following year, Bengal suffered from crop failure, along with the loss of the normal imports of rice from Burma. Transportation was badly affected by the war, and a severe famine resulted. In this catastrophe the F.A.U. workers found themselves absorbed in many areas and in many forms of relief. Early in 1944 the American Friends Service Committee joined in the relief of famine survivors in an extensive program of supplying from America vitamins, milk and medicines. Later projects were undertaken in an effort to assist those who had lost their means of livelihood to find new ways to support themselves once more. Now the government and local organizations have taken over some of these functions, and many F.A.U. workers are due to return home. We who follow up their efforts will be a small group, working in different capacities and areas, as needed and fitted, in medical, social, educational or other fields, in the hope that our presence and our work may contribute constructively to the task of mutual interpretation and reconciliation.

Here at Contai I am being given a chance to learn what has been done thus far and what problems have to be faced in work of this sort, as I find myself in charge of the Unit’s work in this district. Some distribution of milk and vitamins is still going on. Just now an American colleague is here giving a short course in microscope technique to several local doctors, so that we may place two microscopes in this area. Our chief project lies out in the country five miles from here, where a weaving center, started in order to give employment to widows and children, is on the way to becoming a co-operative self-managing institution. Nearby is a dispensary and tiny infirmary which serves the adjacent villages. Some distance away is a village in which some twenty houses have been built for the weavers to live in, and now there is a school being…

…conducted for the children and a small carpentry school. (All the buildings mentioned are of thick mud walls and thatched roofs.) My time is taken up with accounts, correspondence, daily visits to all sorts of local government offices, endless details of permits and reports and applications required by government, frequent trips to the weaving center, milk canteens to be visited and supplied, various other truck trips, and innumerable other details too varied to describe. Just now we are anticipating and planning for the visit of Mahatma Gandhi later this month, which has many interesting angles which should not be elaborated here.

We are surrounded by low flat country, dotted with villages hidden in trees, separated by fields of rice. Six miles to the south is the seawall, and beyond it the sea, from whose invasion three years ago the region has not yet fully recovered, as, for instance, in the lack of cattle. This is the first crop of rice in four years, because of the salt left by the flood. Now the harvesting is under way everywhere, a pleasant and a cheering sight. It does not seem like December or the Christmas season, with these lovely sunny days and temperatures in the seventies by day, in the fifties at night. But Christmas is not snow or cold or even a certain time of year. With the war leaving its inevitable brood of wars to the east of us and to the west, and with all the tension surrounding us here, we are all too vividly aware that the chief business of each one of us in this world of strife is to bring nearer to fulfillment for our respective communities the promise of peace on earth.

[Handwritten notation at the bottom of this page: “I hear you are at home this year. I wonder if you are undertaking any job or activity of any sort there. All good wishes for 1946.
Sincerely,
Burton Rogers
Jan. 23, 1946”]