SCRAPBOOK BEFORE 1929: H.D. Norman “The English of the Mountaineer” 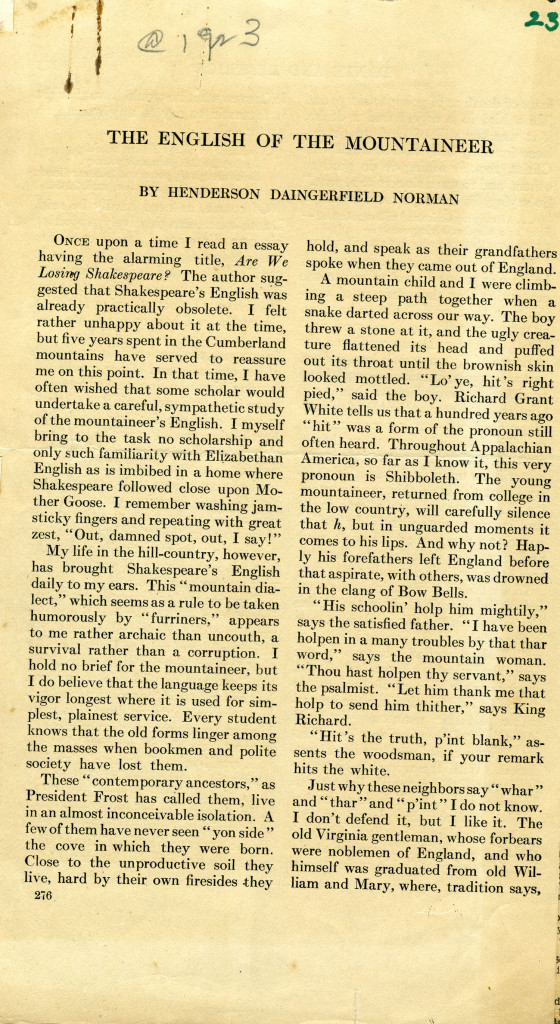 THE ENGLISH OF THE MOUNTAINEER

Once upon a time I read an essay having the alarming title, Are We Losing Shakespeare? The author sug­gested that Shakespeare’s English was already practically obsolete. I felt rather unhappy about it at the time, but five years spent in the Cumberland mountains have served to reassure me on this point. In that time, I have often wished that some scholar would undertake a careful, sympathetic study of the mountaineer’s English. I myself bring to the task no scholarship and only such familiarity with Elizabethan English as is imbibed in a home where Shakespeare followed close upon Mo­ther Goose. I remember washing jam-sticky fingers and repeating with great zest, “Out, damned spot, out, I say!”

My life in the hill-country, however, has brought Shakespeare’s English daily to my ears. This “mountain dia­lect,” which seems as a rule to be taken humorously by “furriners,” appears to me rather archaic than uncouth, a survival rather than a corruption. I hold no brief for the mountaineer, but I do believe that the language keeps its vigor longest where it is used for sim­plest, plainest service. Every student knows that the old forms linger among the masses when bookmen and polite society have lost them.

These “contemporary ancestors,” as President Frost has called them, live in an almost inconceivable isolation. A few of them have never seen ” yon side ” the cove in which they were born. Close to the unproductive soil they live, hard by their own firesides they hold, and speak as their grandfathers spoke when they came out of England.

A mountain child and I were climb¬ing a steep path together when a snake darted across our way. The boy threw a stone at it, and the ugly crea¬ture flattened its head and puffed out its throat until the brownish skin looked mottled. “Lo’ye, hit’s right pied,” said the boy. Richard Grant White tells us that a hundred years ago “hit” was a form of the pronoun still often heard. Throughout Appalachian America, so far as I know it, this very pronoun is Shibboleth. The young mountaineer, returned from college in the low country, will carefully silence that h, but in unguarded moments it comes to his lips. And why not? Hap¬ly his forefathers left England before that aspirate, with others, was drowned in the clang of Bow Bells.
“His schoolin’ holp him mightily,” says the satisfied father. “I have been holpen in a many troubles by that thar word,” says the mountain woman. “Thou hast holpen thy servant,” says the psalmist. “Let him thank me that holp to send him thither,” says King Richard.

“Hit’s the truth, p’int blank,” as-sents the woodsman, if your remark hits the white.
Just why these neighbors say ” whar ” and ” thar ” and ” p’int” I do not know. I don’t defend it, but I like it. The old Virginia gentleman, whose forbears were noblemen of England, and who himself was graduated from old William and Mary, where, tradition says, ….

they think in Greek and Latin, will tell the stranger, “Over thar is Gloucester P’int. ” I don’t know the reason, but I assume it is a good one.

The mountaineer is conservative and brief in conversation. As I drive down to the water’s edge. the ferryman hails me. “Want over?” he says. I wonder if ” I’Il in ” is the proper response as in
the days of chivalry, but answer more at length, “I’d like to drive across if the ford is safe. Can I get over all right?” My ferryman answers guardedly, “You mought, and ag’in you mought n’t.”

We are apt to smile, or frown, at whatever is not our own usage. “Two negatives make an affirmative,” quotes the schoolma’am glibly. ” Don’t say a-doing,” admonishes the mother, “say
doing or being done.” Yet Shakespeare and the mountaineer make plain to a sympathetic understanding that the double negative may make for emphasis, not contradiction; and that which is a-doing moves forward more stoutly than that which is being done.

“l ha’e n’t ne’er a thing to play With,” complains the mountain child. The writer of tales in ” mountain dialect” ignores the legitimate contradictions— left in the low country to the
Scot or the poet — and writes uncouthly, “l haint nary thing.”

When the small neighbor tells me, ‘l Come on a arrant,” I am tempted to criticise the noun, but bethink me of Sir Walter Raleigh’s command, —

Go. sou, the body’s guest,
Upon a thankless arrant

The farther one goes from a railroad, the quainter sounds the English. Forty miles on horseback bring one near to Chaucer’s time. The hospitable house-holder calls from his cabin door, ” Light, and hitch your beastie.”

If the “beastie” one rides be a hobby, there is always danger that it will carry him too far. I have heard it argued that when the Highlander says, as he frequently does, “She been a-punin,’
” we been hearty,” he means, not “she has been ailing,” ‘ ‘we have been well,” but we are so; and the idiom is that of the song from Cymbeline. It may be so, but elisions are common, and we must judge by the ear alone, so I have not felt that this was a safe conclusion. But I should love to believe it.

The stranger is apt to be puzzled when the mountain mother tells him that “Sairy and Tom air a-talkin’.” Yet I take it the phrase is in just that sense in Lear, When Regan says jealously, ” Edmund and I have talk’d. ” I told a dear Old neighbor that my guest, Miss Blank, could not come to say good-by, as she had planned, because she was packing her trunk. ” Ain’t thar ne’er a man about?” asked Aunt Polly, scandalized. “That child ain’t stout enough to pack a trunk no piece.”

“Those girls are of a favor,” says my mountaineer, and so does Shakespeare. “I come to pass the time of day,” says my neighbor. ” time of day unto my gracious lord,” says Hastings to King Richard. When Baptista tells Petruchio that Kate ‘ ‘is not for your turn,” I think he uses the expression as does the mountain mo-
ther who says her child is “ill-turned,” or ‘ ‘has a mannerly turn,” as the case may be. “1 never seen a child that
took so much dinging,” says the mother. One knows the word, of course, since one’s first acquaintance with little Tommy Green and big Bill Stout; but I have only lately come upon Alexander
Hume’s lines about the cock :

With claps of joy
His breast he dings.

The mountaineer says “afeared” so does a worthless fellow is “a sorry fellow,” by both authorities. In King Richard Ill, which I
quote oftener than another play only

because I read it yesterday, and these phrases, any one of which I have heard repeatedly among my mountain neighbors: ” Domestic broils clean-over-blown “Then he is more beholden to
you than l”; “A care-crawd mother to a many sons “Full as long a-doing ‘ “Yet from my dug she drew not this deceit ” ; “Tetchy and wayward was thy infancy. ”

The newcomer in the mountains hears these words gleanings, but if the kind ones take you into their home life so far as to let you sit quietly at the fireside while they talk of the day’s work, it is like listening to another and stronger language than our twen-
tieth-century English.

In such a home, the wife is ‘ ‘my woman,” the husband, his wife’s “man ‘ and it seems an earnest that here in the hills there is a survival of the times when, forsaking all others, married folk clave only to each other, as long as they both should live. As the family gathers in at twilight, the daughter tells how little this evening’s milking yielded, ” though I dribbed and dribbed.” The father accuses the neighbor lad who drove up the cows as “a Sorry Cow-
herd.” The mother, suckling the ” least one” of the children, tells of the oldest daughter’s progress in the art of weaving: “She can warp off every grain as good as ever I could; I aim to learn her
to gear the loom to-morrow.” The child on the floor plays with ” hits puppet. [poppet]”

In a dark windowless little cabin the people gathered one evening for a prayer-meeting. A woman prayed in an agonized, hysterical voice for “a special blessing, Lord, a very special blessing.” When her voice died away, an Old man, With a long White beard, knelt stiffly with rheumatic knees and prayed in these words: “Lord, we know mighty little. You know our need-cessities. Bless us to suit yourself. Amen.”