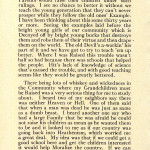 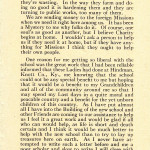 MR. WILLIAM CREECH, whose whole life has been lived far back in the Kentucky mountains, where he has thought out, unhelped, his ideals of education, gave 136 acres of land for the establishment of the Pine Mountain Settlement School. He wishes to tell why, for more than thirty years, he wanted such a school, because he hopes other people will give to it if they know the reasons for his gift.

I want to tell my reasons why I want a school here at Pine Mountain. There is so many of our young folks growing up here not even taught up as to Morality. It grieved me to think that Parents would raise their children under such rulings. I see no chance to better it without we teach the young generation that they can’t never prosper while they follow the old ones’ Example. I have been thinking about this some thirty years or more. Seeing the examples laid before the bright young girls of our community which is Decoyed off by bright young bucks that destroys them and robs them of their virtue and then draps them on the world. The old Devil’s a-workin’ his part of it and we have got to try to teach ’em up better. Where I was Raised this trouble wasn’t half so bad because there were schools that helped the people. Hit’s lack of knowledge of science that’s caused the trouble, and with good teaching seems like they would be greatly bettered.

There being lots of whiskey and wickedness in the Community where my Grandchildren must be Raised was a very serious thing for me to study about. I heard two of my neighbors say there was neither Heaven or Hell. One of them said that when a man was dead he was just the same as a dumb beast. I heard another one say who had a large Family that he was afraid he could not raise his children as mean as he wanted them to be and it looked to me as if our country was going back into Heathenism, which worried me a great deal. My idea was that if we could get a good school here and get the children interested it would help Moralize the country. If we can bring our children to see the error of the liquor we can squash it.

…State or County they was borned. We need a whole lot of teaching how to work on the farm and how to make their farms pay, also teaching them how to take care of their timber and stuff they’re wasting. In the way they farm and doing no good it is hardening them and they are turning to public works, too many of them.

We are sending money to the foreign Missions when we need it right here among us. It has been a Mystery to me why folks do it. Of course, one soul’s as good as another, but I believe charity begins at home. I wouldn’t ask a person to help us if they need it at home, but if they have anything for Missions I think they ought to help their own people.

One reason for me getting so liberal with the school was the great work that I had been reliable informed that these Ladies had done at Hindman, Knott Co., Ky., me knowing that the school could not be any special benefit to me but hoping that it would be a benefit to my Grandchildren and all of the community around me so that I may spend my Last days in a quite moral and peacable [sic] country and a benefit for the yet unborn children of this country. As I have put almost all I have into the Building of the new school and other Friends are coming to our assistance to help us I feel it a great work and would be glad if all who can would help, as life is short and death certain and I think it would be much better to help with the new school than to try to lay up treasures here on earth. As I never have attempted to write such a letter before and me a poor scholar and slow to write I will close with many more things on my mind that I could write about.

1915 ? BROCHURE: THE PINE MOUNTAIN SETTLEMENT SCHOOL IN THE MAKING