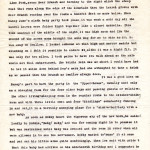 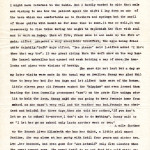 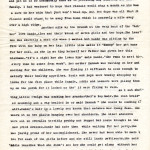 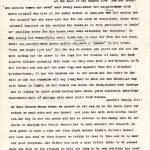 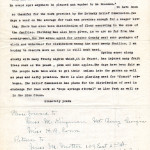 Some of you know how delightful it is to go a half mile up Line Fork, cross Bear Branch and turning to the right climb the steep road that runs along the edge of the mountain thru the laurel groves with Bear Branch roaring over the rocks a hundred feet or more below.  When Nancy Jane’s ninth baby party took place, it was such a cold day all the laurel leaves were folded tight together like a closed umbrella.  This time instead of the middle of the night, it was high noon and Ira the second of the seven sons brought the mule Meg for me to ride as Mr S was away on Swallow.  I looked askance at that high and narrow saddle but climbing on I felt it possible to endure it, altho it was a tight fit.  It was only for two miles.  I took pains to have Ira walk ahead so the mule would not feel embarrassed.  The bridle rein was so short I would have had to let it slide down behind Meg’s ears, had she attempted to take a drink as we passed thru the Branch as Swallow always does.

It was a good idea on Nancy’s part to have the party in the “Upper-house”, usually used only as a sleeping room for the four older boys and passing guests or relatives.  The other living-sleeping room is the regular route to the kitchen-dining room and with three little ones and four “Middlings” constantly running in and out, it is a terribly annoying place for a sick-a-bed-lady with a new baby.

As soon as Bobby heard the vigorous cry of the new born, he called loudly to Ruthie, “Baby! Baby!” and was for coming right in to possess it but was restrained until baby was dressed and the room in order when all were allowed in to see the new-comer.  Bobby wanted to “nuss” it at once and put out his little arms quite confidingly.  Then Ira said with pride that this baby had arrived on his nineteenth birthday and I suggested he name it.  But Alfred, the mother’s helper (as he never was quite strong enough to do out-side work so has learned to cook, wash dishes and even do the washing) named it Fred in memory of a neighbor’s boy of his age who has just gone to Berea, helped by his sister who was sent there several years ago by the nurse in charge at the Cabin, and now, as a trained nurse, is doing much to help the family.

It was snowing hard in the evening when I might have returned to the Cabin.  But I hardly wanted to ride that mule and wishing to see how the patient spent the night I lay down on one of the beds which was comfortable as to feathers and springs but the smell of those quilts will haunt me for some time to come.  It was so cold, it was necessary to rise twice during the night to replenish the fire with coal and to wait on Nancy.  Then at five, Frank came in and made up the fire again.  Alfred prepared a very creditable breakfast, the eggs being fried quite daintily.  “Soft” says Alfred.  “Yes please” said I.  Alfred added, “I like them that way too”.  It was great riding thru the soft snow on the way home.  The laurel umbrellas had opened out each holding a cap of snow.  The hemlocks and pines were visions of beauty.

The snow did not last but a day so my later visits were made in the usual way on Swallow.  Nancy was glad this time to keep to her bed for ten days and let Alfred take care of the house.  Little eleven year old Frances washed the “hippins” and even ironed them heating the iron (usually pronounced “arn”) on the grate fire using a stove lid to hold the iron.  Nancy said she was going to keep Francie home from school as she wasn’t very well and the weather was bad.  Francie was obedient and helpful for three days, then she told her mother, “If you don’t let me go to school to-morrow, I don’t aim to do nothing”.  Nancy said to me “I let her go as school only lasts another week or two.”

A mile farther up the Branch lives Elizabeth who has her third, a little girl named Pauline.  She was alone at her party with Estil four years and sister two.  Lum, her husband, had been gone for “Doc Metcalf” only five minutes when the great moment came.  She urged Estil to go and feed his calf while she kept Astor on the bed beside her.  Until Doc arrived, it was barely a half hour and the baby greeted him with its welcome cries.  Lum’s sister came to help her for a week.  She looked so trim and neat, being quite a contrast to pale little “Liz” in Lum’s old jumper.  I longed to give her a sweater.  But even had there been one, I would have resisted the impulse as Lum could have gotten her one if he had thought of it.  He seems so intelligent and yet he is so absolutely dumb as to providing any comforts for his family.  I had ventured to hope that Flossie would stay a month as Liz has a sore on her shin that just won’t heal up.  But ten days was all that Flossie could stand, to be away from home which is scarcely a mile away over a high ridge.

Another mile up the Branch at the very head of the “holler” live Ranie, Alec and their brood of seven girls and two boys.  The least one was scarcely a week old when I called but Ranie was sitting by the fire with the baby on her lap.  Little Liza calls it “Nanny” her pet name for her doll.  As she is so tiny herself her father had given her this nickname.  “It’s a sight how she loves him” said Ranie.  “She runs to meet him every time he comes from work”.  Her mother Hannah was waiting on her and cooking for the children.  She was finding it difficult to cook enough to satisfy their healthy appetites.  Rosie and Boyd were busily chopping up limbs for the fire place while Maggie, Addie and Leemore were piling them up on the porch for it looked as tho’ it was fixing to rain.

As I sat chatting, Little Evelyn was combing her grandmother’s top hair.  The rest braided securely and a rag braided in or said Hannah, “She would be combing it all”.  Rainie’s hair is a lovely red brown that matches her ruddy face.  She wears it in two plaits hanging over her shoulders.  The older children were all in overalls terribly grubby and ragged but Rosie brought in the new print dresses.  Rainie had made them while waiting for her party.  She was justly proud of her accomplishment.  She never had been able to make two for each of the girls before and she still lacks petticoats.  She said “Addie remarked that she didn’t see how she could get along without her overalls as she has to work”.  Then she added “I don’t work much only drag in limbs for the fire.”  She has never been to the Cabin so I asked her when she was coming.  “When I grow big” she answered promptly.  I had taken some of the Primary Bible Lesson leaflets with me for Rosie and Boyd who go to school.  They read them over and over to themselves and the young-uns.  “Pap reads them also” said Rosie.

At the head of the branch live “Doc and Paule”.  “Doc assists women and cows” said Nancy Jane.  Since her acquaintance with nurse Metcalf who lived at the Cabin before we came, she does not employ Doc for herself but she does call him for the cows on occasions.  Since nurse Metcalf insisted on his washing his hands, he is very particular to insist on “scalding water for his hands, even when attending the beasties”.  He really has wonderfully small hands and is sent for from far and near.  Paule [Polly] was married many years before she would have a “winder” in her house.  “Some one might look in.”  But the day we called six years ago she and Doc were sawing out the place in the logs for the window.  At last, the dark lean-to kitchen actually fell down.  So they must have a new kitchen.  So her brother and son got out some logs and squared them for a detached kitchen-house.  It has two windows, one to the South and the other to the West so she has sunshine all day long; that is when the sun shines.  At any rate there is light.  Si her oldest son works the farm, raises some turkeys and is trying to raise coons having made three quite elaborate shed-like enclosures mad of palings with hand split roof boards.

Another family lives on Bear Branch whose house we passed on our way up to the head.   Upon our return we must stop and see Bennet and Lora his wife with Melvin their son.  The boy is now ten years old but so devoted to his mammy that he insists on sharing her bed.  So Bennet had to make another for himself.  He took pains to make a nice one from black walnut timber.  Neither Bennet nor Lora can read so they depend on Melvin to read to them and he is making good progress.  His father has made a nice little table to be placed near the fire in the evening to hold the lamp so he can continue his reading.  Many books he borrows from the Cabin here and this is one use the Cabin has, to get suitable books for them.

Lora was very sick and I was taking care of her.  There was need of special attention to cleanliness so Bennet was urged to spit in the ashes rather than on the floor or any place he chanced to be.  He did try while Lora was sick and until she became well and then he became careless and spat anywhere. “It was his house.  He could spit anywhere he pleased and wanted to, he reckoned.”

We have been so thankful for the work provided by the Kentucky Relief Commission.  Two days a week on the average for each man provides enough for a meagre living.  There has also been distribution of flour according to the size of the families.  Clothing has also been given.  As we are so far from the county-seat, the Red Cross agent for Letcher County sent some packages of cloth and underwear for distribution among the most needy families.  I am hoping to receive more as there is still much need.

Spring comes along slowly with many frosty nights which, it is feared, has injured many fruit trees such as the peach, plum and some apples.  The days have been fair so the people have been able to get their onions into the garden as well as peas and early potatoes.  There is also planting seed for “forward” cabbages.  The Relief Commission has plans for the distribution of seed in exchange for road work so “Hope springs eternal” on Line Fork as well as in the Blue Grass.