CREECH LETTERS 1916 [One letter and a narrative, “Uncle William’s Reasons”, each in the words of William Creech are included in a 2-page fundraising publication. The date, “May 18, 1916”, is handwritten in the margin of page 2. The letter is a duplicate of Creech Letters 1915.]

UNCLE WILLIAM’S LETTER Dated November 20, 1915. William Creech writes that at 70 years old he’s seeing his cravings of many years coming true. Work has progressed in the two years since he asked for the school under management of Miss de Long and Miss Pettit. Creech describes the various buildings that have been constructed or are underway. There are about 40 students from five years old and up who would have no chance in life without the school ; Creech visits the school nearly every day and sees much progress in the care of the children. He and the others hope for money to have 150 children at the school. He describes what they would learn. Cutshin people also want a school. Creech hopes friends will help the younger generation of mountain people have a better life. He has deeded his land to the school for that purpose. Signed by William Creech, Sr.

UNCLE WILLIAM’S REASONS A photo of William Creech and an introductory paragraph precedes his narrative. William Creech lists the reasons he wanted a school at Pine Mountain: to teach the area children morality so they can avoid bad influences and habits; to teach how to make farming profitable. He states that charity begins at home and knows the school would benefit his grandchildren, the community and future children. He has donated a liberal amount of land because the “ladies” had done great work at Hindman. 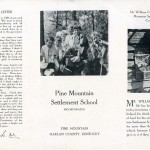 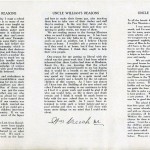 To all the friends that have holp (sic)
the Pine Mountain Settlement School,
I was seventy years old the 30th day of last month, and I’m seein the goin on that I’ve craved to see for many years. Somethin like two years ago I wrote solicitin aid and assistance for the school which we was goin to try to build. Since that time the work has progressed mightily under the management and supervision of Miss de Long and Miss Pettit. I have invested all I have in the school and it gives me great satisfaction to see the change that’s been made. I don’t begrudge nary dollar that I put into it. The good people a helpin us had done a great thing for us, in helpin the poor and needy.

We are makin great headway. There has been two good houses built, beside an old log house rebuilt out of the fragments of old log houses somethin like a hundred years old; and a Pole House excellent furnished in old fashioned way to accommodate our visitors. One good barn nearly complete; one stone tool house; one House in the Woods used for school and sufficient in size to accommodate a good audience for speakin or church service. The frame is agoin up of a large buildin and we hope it can be used by Christmas. We are gettin the farm in pretty good shape and will soon be able to make a good deal of support for the school, in farm produce. We are clearin off and fixin to fence a cow pasture. If we can get money enough we will soon be in good shape.

The school has got on hand about forty children from five years old and up, most of them destitute of any means whereby they could support theirselves and with no chance to get any trainin either for labor or education, all bright children, little boys and girls. Without the assistance of this school i don’t see any chance for them to ever make anythin out of theirselves. I visit the school nearly every day and I think the children progressin nicely. They don’t look any like they did when they come to this school, barefoot and almost naked. They look now well cared for and wear garments nice and clean, a thing they never knew before. They are doin awful well. We’re in hopes…

…we can get money so we can fetch in 150 of just such children as we’ve been ahandlin. We want to teach them books and agriculture and machinery and all kinds of labor and to learn them to live up as good American citizens. We are tryin to teach them up so they can be a help to the poor and to the generation unborn.

People of other communities are payin us visits and are so pleased with the work here that they want us to start a school over on Cutshin about fifteen miles from here. On account of the vile work and drinkin carried on in that country amongst children, I think if we had a school there like this, it would be a great blessin to the children there. I think this is all the school that you and Miss Pettit and Miss de Long and me can manage, but I would be glad if somebody could go to help them.

I hope our good friends will come forard (sic) and help us all they can to make better people out of our wild mountain people that has been raised up here in ignorance and almost regardless of law. Their fore-parents has laid the pattern for them of drinkins, killins, whorins and abomination in the sight of God. (Hit’s rough to say, but hit’s the truth and I think hit ought to be said). I see no chance to teach the old but if the children can be teached up in a better light they can lay an example even for their parents.

I don’t look after wealth for them. I look after the prosperity of our nation. The question of this world is naught. We are born into it naked and we go out naked. The savin of the soul is what we should seek. I want all younguns taught to serve the livin God. Of course, they won’t all do that, but they can have good and evil laid before them and they can choose which they will. I have heart and cravin that our people may grow better. I have deeded my land to the Pine Mountain Settlement School to be used for school purposes as long as the Constitution of the United States stands. Hopin it may make a bright and intelligent people after I’m dead and gone.

MR. WILLIAM CREECH, whose whole life has been lived far back in the Kentucky mountains, where he has thought out, unhelped, his ideals of education, gave 136 acres of land for the establishment of the Pine Mountain Settlement School. He wishes to tell why, for more than thirty years, he wanted such a school, because he hopes other people will give to it if they know the reasons for his gift.

I want to tell my reasons why I want a school here at Pine Mountain. There is so many of our young folks growing up here not even taught up as to Morality. It grieved me to think that parents would raise their children under such rulings. I see no chance to better it without we teach the young generation that they can’t never prosper while they follow the old ones’ Example. I have been thinking about this some thirty years or more. Seeing the examples laid before the bright young girls of our community which is Decoyed off by bright young bucks that destroys them and robs them of their virtue and then draps them on the world. The old Devil’s a-workin’ his part of it and we have got to try to teach ’em up better. Where I was Raised this trouble wasn’t half so bad because there was schools that helped the people. Hit’s lack of knowledge of science that’s caused the trouble, and with good teaching seems like they would be greatly bettered.

There being lots of whiskey and wickedness in the Community where my Grandchildren must be Raised was a very serious thing for me to study about.

I heard two of my neighbors say there was neither heaven or Hell. One of them said that when a man was dead he was just the same as a dumb beast. I heard another one say who had a large Family that he was afraid he could not raise his children as mean as he wanted them to be and it looked to me as if our country was going back into Heathenism, which worried me a great deal. My idea was that if we could get a good school here and get the children interested it would help Moralize the country. If we can bring our children to see the error of the liquor we can sqush (sic) it.

Some places hereabouts are so Lost from Knowledge that the young uns have never been taught the knowledge of reading and writing and don’t know the country they were Borned in or what State or County they was borned. We need a whole lot of teaching how to work on the farm…

…and how to make their farms pay, also teaching them how to take care of their timber and stuff they’re wasting. In the way they farm and doing no good it is hardening them and they are turning to public works, too many of them.

We are sending money to the foreign Missions when we need it right here among us. It has been a Mystery to me why folks do it. Of course, one soul’s as good as another, but I believe Charity begins at home. I wouldn’t ask a person to help us if they need it at home, but if they have anything for Missions I think they ought to help their own people.

One reason for me getting so liberal with the school was the great work that I had been reliable informed that these Ladies had done at Hindman, Knott Co., Ky., me knowing that the school could not be any special benefit to me but hoping that it would be a benefit to my Grandchildren and all of the community around me so that I may spend my Last days in a quite moral and peaceable country and a benefit for the yet unborn children of this country. As I have put almost all I have into the Building of the new school and other Friends are coming to our assistance to help us I feel it a great work and would be glad if all who can would help, as life is short and death certain and I think it would be much better to help with the new school than to try to lay up treasures here on earth. As I never have attempted to write such a letter before and me a poor scholar and slow to write I will close with many more things on my mind that I could write about.