CONTENTS: July 9, 1934. Miss Dorothy F. Bolles to Henry Clay Creech. Miss Bolles, Board Secretary, writes from Cohasset, MA, to inform Mr. Creech of a September meeting of the PMSS Board of Trustees and Advisory Board.

CONTENTS: October 4, 1934. Douglas Rengger to Henry Clay Creech. D. Rengger writes to H.C. Creech from Louisville, KY, thanking Creech for sending him the two letters with the Board’s final decision. He comments on the two letters, written by Miss [Evelyn K.] Wells, probably in collaboration with Glyn Morris. He, along with Mrs. Speed and Miss Robbins, urge Creech to protest Mr. Martin’s letter. He mentions showing the letters to Elsie and Malcolm.

CONTENTS: November 9, 1934. Evelyn Wells to Henry Clay Creech. E. Wells in Wellesley, MA, responds to H.C.’s letter of November 5, expressing regret that Creech disagrees with the board’s letter. She wonders why it took Creech 5 weeks to tell Mr. Martin. In her October 17 letter, she tried to tell him of her opinion. She mentions seeing Oma and another Ritchie and receiving Delia’s letter.

CONTENTS: November 18, 1934. Henry Clay Creech to Evelyn Wells. H.C. Creech at Pine Mt., KY, writes to E. Wells about his disagreement with the contents of the board letters sent to Mr. Morris and himself. Creech feels that he knows Mr. Morris better than Wells does and gives reasons why he has lost confidence in Morris. 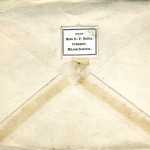 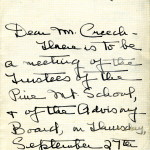 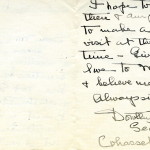 Reverse side of envelope with address sticker: “FROM Miss D.F. Bolles. Cohasset. Massachusetts.”

There is to be a meeting of the Trustees of the Pine Mt. School, & of the Advisory Board, on Thursday, September 27th at Pine Mountain.

I hope to be there & am planning to make a little visit at the same time – give my love to Mrs. Creech & believe me,
Always sincerely,
Dorothy F. Bolles
Secretary
Cohasset – Mass 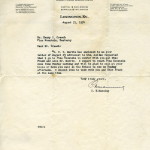 Mr. D.D. Martin has enclosed to me your letter of August 29 addressed to him, and has requested that I go to Pine Mountain to confer with you and Miss Frank and also Mr. [Glyn] Morris. I expect to reach Pine Mountain some time Sunday morning and will be glad to call at your house or have you call at the School to see me Sunday afternoon. I should like to talk with you and Miss Frank at the same time. 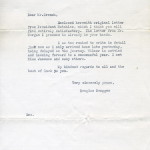 Enclosed herewith original letter from [Berea College] President Hutchins, which I think you will find entirely satisfactory. The letter from Mr. Morgan I presume is already in your hands.

I am too rushed to write in detail just now as I only arrived home late yesterday, being delayed on the journey. Wilmer is settled and looking forward to a successful year. I met Miss Jameson and many others.

My kindest regards to all and the best of luck to you. 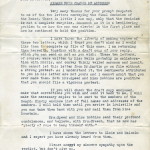 Very many thanks for your prompt dispatch to me of the two letters conveying the final decision of the Board. There is little I can say, only that the decision is not a complete surprise, inasmuch as it is a bewildering problem to me how the man was elected in the first place and how he continued to hold the position.

I have taken the liberty of making copies of these two letters, which I trust you don’t mind as I would like them to complete my file of this case. I am returning them herewith, together with a draft copy of your reply, which you can send or not as you wish. These two letters, of course, were written by Miss [Katherine] Wells probably in collaboration with [Glyn] Morris, and convey thinly veiled sarcasm and insult. You cannot let this letter from Mr. Martin go on file without a strong protest. As I understand it, the sentiments attributed to you in his letter are not yours and I cannot admit that you ever made them. Both Mrs. Speed and Miss Robbins are positive that you should file a vigorous protest.

If you will check the draft copy enclosed, make what corrections you wish and send it back to me, I will make the necessary copies to be sent to the members of the Board. Kindly enclose list of full names and addresses of the members. I will hold them until you arrive in Louisville and you can take them back with you and mail them from Pine Mountain.

Mrs. Speed and Miss Robbins send their profound condolence, and believe, with Mrs. Creech, that he now has “plenty of rope to hang himself with.”

I have shewn (sic) the letters to Elsie and Malcolm and I expect you have already heard from them.

Please accept my sincere sympathy upon the verdict, but don’t give up.

Best regards to Mrs. Creech and all the Family. Sorry I can’t get down this month. I hope to see you and Robert soon. 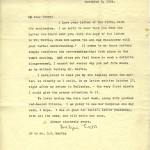 I have your letter of the fifth, with its enclosures. I am sorry to hear that you feel the letter the board sent you, with the copy of the letter to Mr. Morris, does not agree “in any way whatsoever with your verbal understanding.” It seems to me those letters simply reinforce the conversation that took place in the board meeting. And since you feel there is such a definite disagreement, I cannot but wonder why you let five weeks go by without telling Mr. Martin.

I have tried to tell you my own feeling about the matter, as clearly as I could, in my letter written October 17, right after my return to Wellesley, — the very first minute I could give the proper attention to it.

We loved having Oma here last week, along with another red-headed Ritchie. I am going to see her hospital one day soon, I hope. I was so glad for Delia’s letter yesterday, with all the news, and will write her soon.

GALLERY; November 18, 1934. Henry Clay Creech to Evelyn Wells, board member, in response to her letter regarding Glyn Morris misunderstanding. [1 page 003] 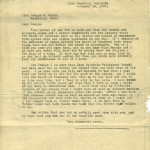 Your letter of the 9th at hand and read and reread and contents noted and I cannot understand how the letters that the board of trustees sent to Mr. Morris and myself of September 29th agrees with the verbal agreement in any way. If I understand the contents of these letters the board of trustees took every thing that was put before the board as falsehoods. Now as I told you when you were here, you do not know Glyn Morris and I am sure you never will know him by coming here and staying a few days at a time. If that man had told you as many lies as he has told me without asking for them you would have probably lost all confidence in him as I have.

Now Evelyn I am sure that Pine Mountain Settlement School has done more for my family and myself than any body else in the past. I am sure that you will not believe it but what I have done and tried to do was for the good of the school, and I think that the board of trustees will wake up to the fact and see it as I do some time, but I fear it will be too late. I have lived by Mr. Morris three years and feel that I have as good a right as anybody to understand him. I have been told by different workers of the school that I would have to take my father’s burdens of the school on my shoulders after his death. After I was told that someone should and as well be myself as some one else. I did co-operate and work with Mr. Morris as long as I could and a lot longer than my father would have. I am sure that my father would not have taken the talk that Mr. Morris has talked to me.

Oma writes that she had an awfully good time with you, and we hope that you see her at the hospital soon.