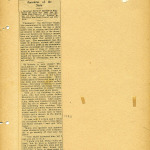 In Old Kentucky: Stories of the Mountains and Anecdotes of the State. Lexington Herald, June 6, 1920. Page 25a 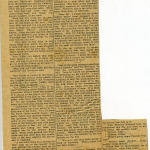 In Old Kentucky: Stories of the Mountains and Anecdotes of the State. Lexington Herald, June 6, 1920. Page 25b

Governor Edwin p. Morrow of Kentucky the other day told the St.
Louis Post-Dispatch about the people of the mountain district in
which he was born and reared and still lives.

“Physically,” the “Governor began, “the mountaineer is raw-boned; muscular, limbed.  He has a deep native vein of religion and the greatest
debates to this day in the mountains are debates on religious themes that
our present-day pastors out in the world think they settled a century ago. The Mountaineer has the pride of primitive virtues still clean and unsullied, pride in his elementals, and his elementals are excelled by no race or, clan or class or creed anywhere in this world. The mountaineer may-be ignorant and the mountaineer usually is ignorant of letters and the softening. of civilization, but he is
“Is honesty la, •are virtue? The mountaineer is honest.

Once on a saddle-journey through the mountains, as night approachéd, I came to the Cabin, the • single roomed log cabin of. “Bruce on the Laurel ForK of the Cumberland. – Molly Bruce; about 73 years old, came out at
my. hello and wanted to put-up’ my horse. Not being permitted to serve
me to that extent; she began the immediate preparation of meats, corn pone and shuck beans.

“Just as I was finishing, in came ‘Lihu, who had been ‘ across Jellico
Mountain to the coünty ‘seat, and gave me a simple salutation. After supper
‘Lihu, Molly and I gathered about the open log fire in silence. I could see
that something was troubling ‘Lihu and that he and Molly wanted to talk and that he and MO
So I asked for my bed. Mountaineer homes usually contain beds in three
corners and a dresser in the fourth. I went to my corner. “It was only 8 0’clock and could not fall asleep, but, after a time, Lihti and Molly thought) I had, and ‘Lihu began : “Molly, you ‘Elember last summer Amos Skidmore come over a-wantin’ me to go security that note for $300 •yes,’ Molly answered him, •an’ r, told you not to do it.’ ” ‘I know you did, Molly,’ “Lihu re-
plied, ‘but he were a neighbor boy and I signed. Now he’s gone and he
ain’t paid it and they brung suit again me. I went to t6wn Ytoday to
see ‘the lawyer, and he tol’ me éto let – ’em git’ judgment,
that- they couldn’t take nuthin’ we had, that the -Cee •
beasts and the homestead and they can’t Ridin’