Winner of the 1924 Pulitzer Prize for plays, “Hell Bent fer Heaven” remains a controversial accomplishment for the the playwright, Hatcher Hughes.  This article reflects the regional response to the play and to its failure to connect with the people about whom the play depicts. According to accounts of the controversy swirling around the production of this play was an accusation that there was some collusion in the selection of the play for the Pulitzer.  Hatcher, a native of Polkville, North Carolina, was born in 1818 and died in 1945. He was on the faculty of Columbia University which played a significant role in the recommendations for the Pulitzer strong-armed the jury which had picked George Kelley’s The Show-Off to receive the award. Literary circles were quick to criticize Columbia’s over-ruling of the committee selection but to no avail.

Hatcher’s love of the Appalachian mountains is evident, but his distance from his subject is demonstrated throughout the theatrical process.  Polkville is located in Cleveland County North Carolina which even today has a 19.1% poverty rate and is largely rural. Hughes was educated at Chapel HIll and would have been in attendance there in the first decade of the twentieth century.  He was on the faculty at Columbia by 1912 and remained there for his lifetime. There is no evidence that Hughes visited Pine Mountain but he likely had contact with individuals at both Chapel Hill and at Columbia University who had close ties with the Settlement Movement and with rural Appalachian educational programs in the Southern Appalachians.

Whether Hughes knew Percy MacKaye, who spent time at Pine Mountain and whose plays often featured dialect and stories derived from Appalachian experiences, is not known.  Further research would likely reveal a connection.  For example, in 1912 MacKaye published The Civic Theatre in Relation to the Redemption of Leisure; A Book of Suggestions in which he put forward the concept of Civic Theatre.  MacKaye believed it to be the “conscious awakening of the people to self-government in its leisure”. A strong advocate of “Community” with a large “C” MacKaye sought to engage his audiences in public support of the arts rather than the common route of reliance on commercial and private endowments.

The following article captures some of the local reaction to the play and the resentment of the New York disdain for local Appalachian actors. 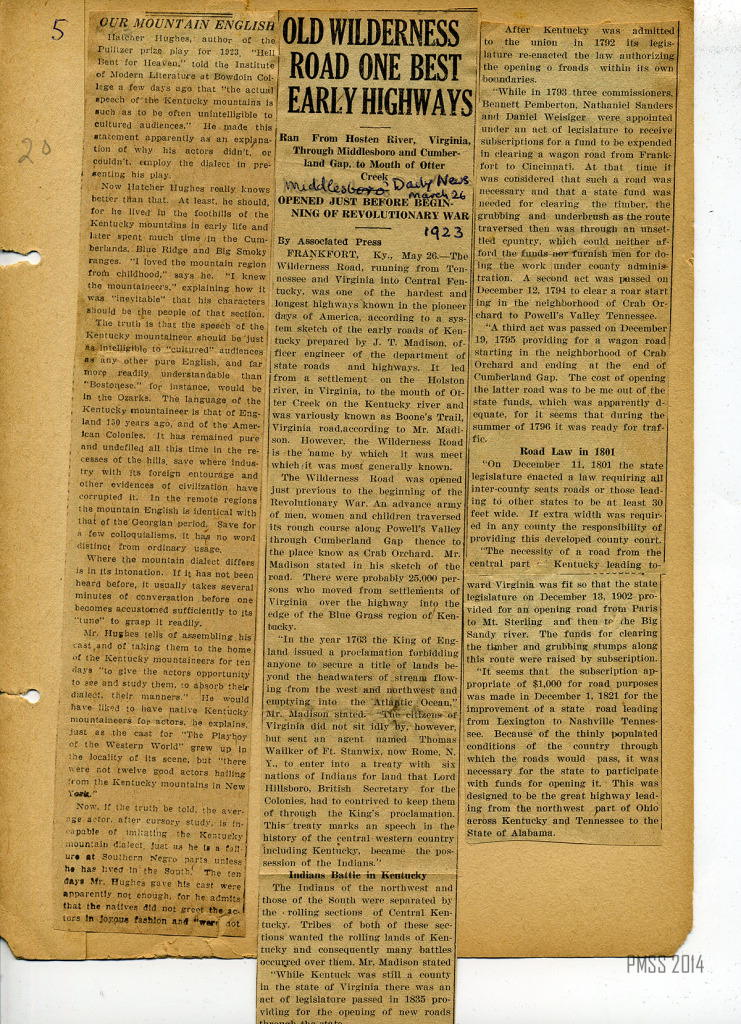 “Our Mountain English.” Middlesboro Daily News, March 26, 1923. p. 01 [Source is uncertain but article accompanies another article from the Middlesboro source.]

Hatcher Hughes, author of the Pulitizer prize play for 1923, “Hell Bent for Heaven,” told the Institute of Modern Literature at Bowdoin College a few days ago that “the actual speech of the Kentucky mountains is such as to be often unintelligible to cultured audiences,”  He made this statement apparently as an explanation of why his actors didn’t, or couldn’t employ the dialect in presenting his play.

Now Hatcher Hughes really knows better that that.  At least he should, for he lived in the foothills of the Kentucky mountains in early life and later spent much time in the Cumberlands, Blue Ridge and Big Smoky ranges. “I loved the mountain region from childhood,” says he. “I knew the mountaineers.” explaining how it was “inevitable” that his characters should be the people of that section.

The truth is that the speech of the Kentucky mountaineer should be just as intelligible to “cultured” audiences as any other pure English, and far more readily understandable than”Bostonese” for instance, would be in the Ozarks. The language of the Kentucky mountaineer is that of England 150 year ago, and of the American Colonies. It has remained pure and undefiled all this time in the recesses of the hills, save where industry with its foreign entourage and other evidences of civilization have corrupted it. In the remote regions the mountain English is identical with that of the Georgian period. Save for a few colloquialisms. It has no word distinct from ordinary usage.

Where the mountain dialect differs is in its intonation. If it has not been heard before, it usually takes several minutes of conversation before one becomes accustomed sufficiently to its “tune” to grasp it readily.

Now, if the truth be told, the average actor, after cursory study, is incapable of imitating the Kentucky mountain dialect just as he is a failure at Southern Negro parts unless he has lived in the South. The ten days Mr. Hughes gave his cast were apparently not enough, for he admits that the natives did not greet the actors in joyous fashion and were not ……… [incomplete article]