Mound Builders in Harlan County. [2 pages]
Unrelated information on “The Garden of Eden” location on Pine Mountain ???? [Source not verified] 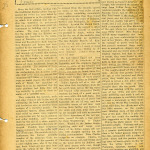 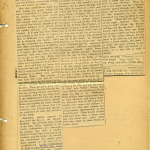 Since the first article, dealing with the traditional history of the Gap appeared the writer has been asked by several persons as to the grounds upon which it is claimed that this region was inhabited in prehistoric days by a race which made great advancement in building and in agriculture.  The same grounds exist for the belief that the Hittites antedated the Israelites in the settlement of Palestine, or the Etruscans lived and flourished in Ital long before Romulus and Remus had been suckled by the she-wolf. They have left traces of their handiwork in the vast mounds and tumuli that thickly dot the Ohio Valley; in vast causeways built through the lowlands of Ohio and Indiana, and in many specimens of their handiwork found in these mounds. The purpose of these mounds has long been a puzzle to the archeologist, but it seems probable that some were erected as fortifications and others as temples and some were erected as fortifications and others as temples and some as burial places, like the Pyramids of Egypt for sepulchers of kings. It is to be regretted that the early pioneers had little time and less curiosity to devote to these remains of a vanished race.

They regarded the mounds, walls and other ruins as only in  the way of cultivating the land, and demolished and leveled as soon as possible these vestiges of a vanished people. The sculptured figures, often carved in bold relief on stone, were regarded as only in the way for use in chimney and cellar building, and removed them by the aid of a stone mason’s hammer, and priceless relics were destroyed. Possibly these sculptured figures contained the key to the mystery of the past. The mounds and embankments, the former probably temples of the unknown Gods, are all that is left us of the remains of a once mighty race, who in the long ago, lived, loved and had their homes in the valleys of the Ohio and Cumberland rivers. In those valleys they erected vast works, built huge teocalli for the worship of unknown Gods, made war, suffered reprisals, even as those who have succeeded them In these valleys, perhaps in the days when the mammoth and mastodon roamed the country, it is likely that the young men and women of that far off time, wandered hand in hand along the river banks and whispered in each other’s ears the old, old but ever new tale of love and devotion, even as the young men and women of today.

That they were driven from the Ohio Valley and sought refuge on lover Cumberland is evidenced by the remains, often of great extent there found. But their enemies still pursued them and forced them to ascend that stream, though in diminished numbers as is proven by the smaller mounds and temples erected. It is said that when Rome was invaded by the Goths the legions then in Brittany were recalled to aid in repulsing the enemy. During the occupation, the Roman soldiery, when not employed in fighting spent their time in road-making, and it is known that these were so substantially built that some of them are in use to this day. From the seat of Roman dominion in England, roads were constructed in all directions. It is said that one legion was forgotten and left in England and that it continued to labor in the construction of a great road passing through Wales. The remains of this road still exist, and the various camps made by the legion in its advance through Wales are still to be seen. These gradually grew smaller and smaller, showing that the legion was growing smaller and smaller in numbers, until the last camp made in the neighborhood of the sea, shows that the road passed entirely through Wales and reached the ocean, though from its small size shows that few survivors were left and that the legion completed its task, but perished in the doing.

Something similar appears to have been the fate of the Mound Builders. The enormous ruins found in the Ohio Valley, and that of the Lower Cumberland are succeeded by vestiges that show a smaller number of men were employed in the building, and the higher one ascends the Cumberland, the smaller grow these mounds and the area of enclosed ground. In the neighborhood of what is now Harlan, they made their last stand, but the vestiges show that their numbers had sadly diminished and that but few were left. The rest of their history is wrapped in impenetrable darkness, and whether the few survivors were annihilated by their enemies, or passed through Cumberland Gap and sought new homes in other lands, must be left for some Champollon [sic] to unravel from the records, carved on stone, or the vast ruins of ancient cities, containing monuments and temples greater than those found in Egypt, or in the ruins of Palmyra, Tadmor and Persepolis, [and ?] in Central America.  As with the Mound Builders the figure of the serpent is often shown, and the teocalli or temples are pyramid in shape, with a flat top for the use of the medicine man, or priest in offering up sacrifices. The late Senator Hunter, of Kentucky, was at one-time minister to Honduras and visited many of these towns that had been hidden by almost impassible jungles from the sight of man.

He had visited Egypt and been astounded at the magnitude of the Pyramids, and the exquisite figures carved in stone of the temples and other buildings of the cities of the desert, but here he found more finished sculpture than that  of boasted Egypt, and vestiges of more populous cities than Thebes or Palmyra.

Indian legends tell of a far off time when their forefathers from the far northwest, across the big water and beyond lofty mountains finally reached the land of a great people, who were white and built forts. But who during a long era of peace had forgotten the art of war, and how successive waves of red men kept driving them farther and farther to the south and east, until they gave up the struggle and such as survived the fierce incursions of the red warriors, passed through a Gap called by them Wauhilnooga, or Eagles Nest. Wauhil in the Indian tongue signifying eagle and nooga nest. Many of the Indian names still survive with changed spelling but the Indian pronunciation. Take Chattanooga as an example. Chatta, in Cherokee means owl, and Nooga nest, so the name given by Indians, and still used, means owl’s nest, though from a matter of pride our generals of during the civil war changed the translation of Chatta, from owl to eagle. The Cherokees, have many legends of fierce rencounters [sic] and bloody battles among the Indians, themselves written fights of the Pinnacle long prior to the advent of the white man. It was on the great highway used by the Indians in their journeys, whether for peace or war from the lakes to the gulf, for that there was considerable communication between the Northern and Southen Indians is certain. The father of Tecumpse [sic] [Tecumseh] and “The Prophet” was a Shawnee, but he passed through the Gap when in search of a wife and wooed and won the daughter of a great Creek chieftain, who became the mother of two of the most celebrated warriors in Indian history. Tecumpse [sic] it is well known, with the aid of his brother, The Prophet, attempted to form a great confederation of all the Indian tribes, and at one time was on the eve of success, but during his absence The Prophet was led to give battle to General Harrison, at Tippe Canoe and was badly defeated, and his reputation as a prophet suffered accordingly. Tecumpse, himself, joined forces with the British general, Proctor when the war of 1812, commenced, and was killed at the Battle of the Thames, by Col. Richardson Johnson, afterward vice-president of the U.S..  He has always been regarded as an example of the Indian warrior at his best, and in spite of his bronze skin had a large element of mercy to a defeated foe in his make up.

In the next article will be given some Indian legends of events happening at the Gap, and also the story of “Big” and “Little” Harpe, the noted outlaws and murders, whose range was that of the Wilderness Road leading from Cumberland Gap to Crab Orchard, and whose thirst for blood led them to kill indiscriminately, men women and children, in revenge for what they claimed was unwarrantable imprisonment in the Knoxville jail. Their known victims numbered more than a dozen, and God only knows how many other lives were taken by these fiends in human shape.  ………. [MORE ?]

[It is the]…..OPINION of many scientists that the Western and not the Eastern world was the seat of the Garden of Eden, and that it was located somewhere near the southern part of what is now known as Central America. Dr. Gorgas, who rendered the tropics exempt from Yellow fever, and this rendered possible the building of the Panama Canal, was of that opinion. Miss Pearl made it the study of several years, and her statement at the end of her studies was given to the world, and a call made for funds to build a monument on Pine Mountain at the spot where her remains were most likely buried. Miss Pearl advanced many arguments that have not yet been controverted in support of her theory. She claimed that the costume of leaves worn by our first parents rendered them ready prey to mosquitoes, chiggers and the thousand and one insect pests of the tropical regions, and that in order to escape, they were forced to drift North, and that they continued to drift in that direction, year after year, during the lifetime of Adam and Eve, and their death found them in the neighborhood of Pine Mountains. As our first parents lived to the age of nine hundred and thirty years, they would have only been obliged to travel a few miles northward each year in order to have brought them this far north. Miss Pearl was satisfied with the correctness of their views, and gave them some publicity, and made a call on their descendants to contribute funds to erect a monument to their memory, but the World War breaking out about that time, her efforts met with but little success, as the people were thinking more of the present than of the past. But it is only fair to give her credit for making the first suggestion as to the monument.

This is the idyllic season for the mountain people. ‘Possums and persimmons are both ripe, and if there is a greater gastronomical delicacy than a fat baked possum lying on a big dish, surrounded with a collar of sweet taters and the possum weeping tears of brown gravy on the ‘tatters, the writer knows it not. Pumpkins, squashes, turnips, cabbages and potatoes are plentiful, and these with old fashioned lye hominy and corn pone leave nothing to be desired in the way of food.

Deacon Jim Callaway, is one of the most noted and best liked story tellers in the neighborhood and hearing him recount some of the adventures of his boyhood days is better than reading a “thriller” or attending the movies. Old as he is, he ……..[[missing]  DOES NOT BELONG WITH THIS ARTICLE ?]