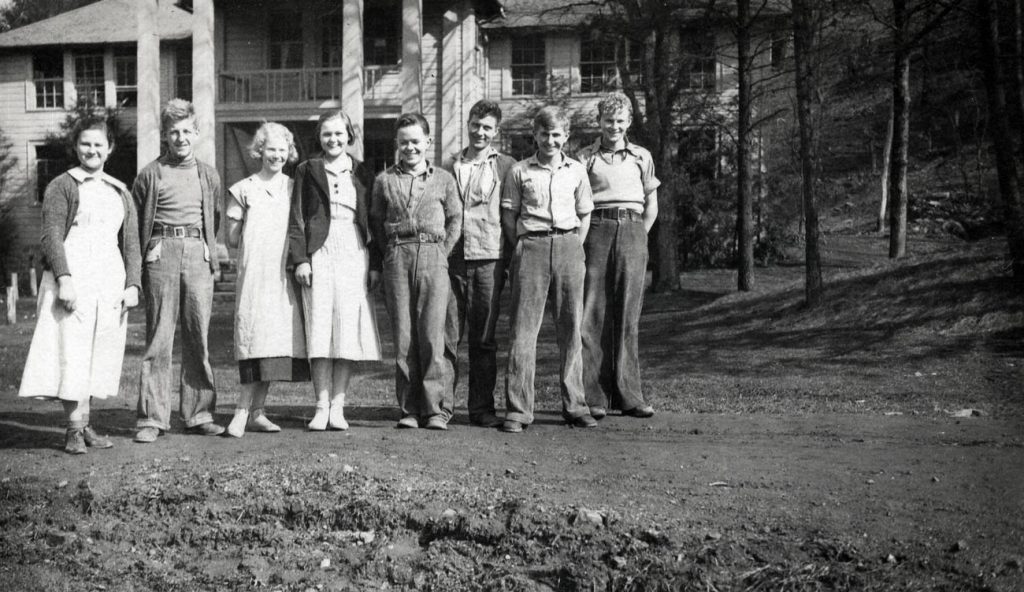 Little has been found about Ethel Ruby Hamilton in the PMSS Collections to date concerning her two years at Pine Mountain. The entrance forms she and her mother completed, the letters she exchanged with then-director, Glyn Morris, and FamilySearch.org are currently the only resources available to tell her story. Additional information will be added to this page if any is found.

When Ruby Ethel Hamilton applied to Pine Mountain Settlement School in 1935, she was 15 years old and living in Hot Spot, Kentucky, a community in Letcher County named for the Hot Spot Coal Company. According to her application, the house she lived in was a typical “coal-camp house,” with four rooms heated by a stove and lit by electricity. Water was supplied by a pump.

Ruby’s mother, Esther Layne Hamilton, was born in Tennessee and had completed six grades of school. She and Henry Hamilton had six children. Four of them were brothers and at the time of the application all were married and worked as miners: William Clyde (age 37), Charles (died at age 29), and John (27), and A.W. (22). Ruby had two sisters, Anna Mae (19) and Violet, age 12, who was attending fourth grade at Hot Spot School, and the only child remaining at home besides Ruby. Sadly, Just six weeks before the date of Ruby’s application, her father had died. He was a miner, also born in Tennessee.

Hygiene, history, and English were Ruby’s favorite school subjects and her interests included reading and sewing. She hoped to become either a stenographer or nurse when she finished school.

In a letter of May 11, 1935, which accompanied her application, Ruby wrote: “…[T]he reason I want to go to school over there is, my parents are poor and cannot pay for an education and I want to work my way through anyway.” Two months later Morris sent her the good news that he had “found someone who will loan you your entrance fee of ten dollars.” The money was loaned by the National Youth Administration (NYA) created by President Roosevelt in June 1935 to provide part-time work for youth in school who needed financial assistance and those out of school and unemployed.

At the end of Ruby’s first term at PMSS, Morris wrote the following to Ruby’s mother on December 31, 1935:

Beginning with last year we adopted the policy at Pine Mountain of writing a letter to the parents of our students rather than sending a report card. We believe that you will like the letter much better because it will explain more in detail just exactly what Ruby is doing at school.

Ruby studies hard, and makes average grades. She is doing about all that she can do. Her work in weaving is fair and I believe that she needs encouragement and praise from her family.

The following summer, Morris arranged for Ruby to stay at PMSS in a special program to work for seven weeks,“several hours a day, to pay for [her] board and the rest of the time will be given over to supervised activities, such as swimming, hiking, handcrafts, etc.”

At the end of her second year at Pine Mountain, Morris wrote:

She did better industrially than academically and we consider this very important. We think Ruby made a fine adjustment to Pine Mountain and will be glad to have her come back during the coming year.

Ruby responded that she “shall be more than pleased to come back to Pine Mountain the following year….” Although Glyn Morris did what he could to assist Ruby, her time at the boarding school was short, ending in the spring of 1936.

Ruby died at age 81 on September 13, 2000, in Middletown, Ohio, close to one month before the death of her husband of 62 years. According to her obituary on FindAGrave.com,

She lived most of her adult life in the Middletown area. Mrs. Hale was employed in the stainless steel department of Armco Steel Co. during World War II and had also been employed at Frigidaire. She was a homemaker and her life was devoted to her family. She was a member of the Butler County Native American Council.