Bill and I will be at school Sept. 2, 1928. My determination is to do my very best to do the things that has been ask of me.

[Note: Letters from PMSS staff in the PMSS Collections are carbon copies, typewritten, unsigned, and meant for the Office files. The original signed copies were sent to the correspondents. The initials at the bottom left of most PMSS letters indicate the writer (along with initials of the secretary). For example, “KP” refers to Katherine Pettit and “AM” to Angela Melville. Letters from Rose Brown, William Brown, and several from W.Taylor Brown are handwritten and original. The following list of contents is in chronological order and not necessarily in the order of the image numbers.]

My dear Miss Pettit:
I have a half brother and sister, fifteen and seventeen, living in Laurel County, who find it necessary to go away from home to attend school. They would like to come to Pine Mountain for next year.

Rose, the girl, attended Langdon Memorial last year where she finished the grades and made a good record. She wishes to change to Pine Mountain this year in order to be with her brother, Bill. he is ready for the 7th grade.

They are both willing and strong enough to do hard work.
Please let me know as soon as possible if you can accept them. ….
Sincerely,
(signed) Taylor Brown

[010], [011] June 25, 1928. Two-page letter to Pettit from Bill Brown, Brock, KY, expressing his interest in attending PMSS; particularly woodworking. Offers to come in July and work. “My sister and I are sending our report cards for last year. We are both anxious to get started in your school.”

[014] August 17, 1928. Handwritten letter to Miss Pettit from W.T. (Taylor) Brown, Berea, KY, describing his arrangements to bring Rose and Bill to PMSS on his way to Harlan to teach. “The parents have agreed for Rose to go but not Bill. However, when I get home I think I can change their minds. I am anxious to see your school again.”

[016] October 12, 1928. Handwritten letter to Miss (Angela) Melville from W.T. Brown at Lejunior, KY, who mentions the teacher’s meeting and is sending “a paper which states and gives the solution to many problems peculiar to the schools of that section. I hope to be there [on] the 20th…. Enclosed is a check for Rose and Bill’s expenses.”

[018] March 19, 1929. To W.T. Brown from AM (Melville), enclosing a letter to Melville from Bill Brown and explaining the reason for the letter.

[019] March 25, 1929. Typewritten letter to Melville from W.T. Brown, regretting Bill’s recent conduct and suggesting how to carefully and gently handle the situation.

[020] March 27, 1929. To W.T. Brown from AM (Melville), thanking him for his letter and telling him how PMSS will follow up on his suggestions. The School cannot let Bill and Rose go with him for Easter as the PMSS students are under a measles quarantine through Christmas. Invites him to the Easter morning service, if he has already had the measles.

[021] May 20, 1929. To “My dear Taylor Brown” from [unsigned, apparently Pettit], asking what he plans for Bill and Rose next year. Explains why the School would like Rose and Bill to return. “[Rose] has done so well and we find girls do so much better the second year. And then she is a girl of fine character and spirit and is such a fine influence with the other girls. You see she is doing as you are doing, helping others to be better just as you do.” Bill is trying to improve his behavior and “perhaps we could do him more good next year than if he went some other place….”

[023], [024] June 16, 1929. Two-page handwritten letter to Miss Pettit from W.T. Brown in Berea, Ky., [023] answering Pettit’s “inquiry about my plans for Bill and Rose. … Since Mattie is here this summer I thought it would be nice to have Rose here to room with her. I think the association will be good for both since they have been together so little.” Tells about Rose’ s time in Berea, having only taken a few units in music and education. “Next year I want her to continue here for a certificate so she can go out on her own expense as soon as possible. I have been helping others so long that now I feel that I should begin to help myself more. As for Bill, I will agree to pay his expenses there if he wants to go back and do well.”

[024] June 16, 1929 (continued). In a postscript, he writes about his appreciation for “your interest in Rose and Bill and I am grateful for what Pine Mountain has meant to so many boys and girls.” Describes his leaving Shields school at Lejunior after “seven months state’s term” because of politics but agreed to return for next year. He is taking physics, “which is a good foundation for the rest of my ag. work.”

WILLIAM AND ROSE BROWN Student Records (Password-protected)
NOTE: Images of the full set of student records are considered private material and are not generally publicly displayed. Their access may be provided on request, pending approval of Pine Mountain Settlement School Collections and the Collection archivist. 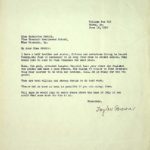 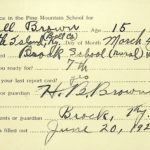 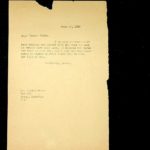 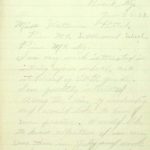 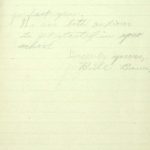 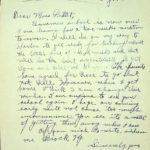 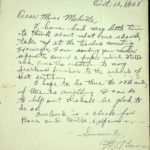 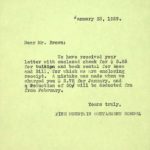 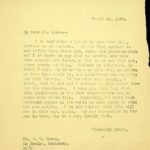 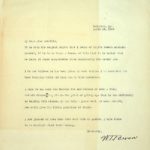 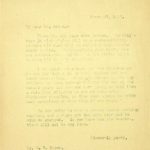 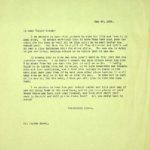 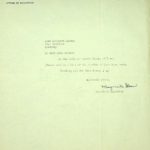 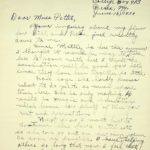 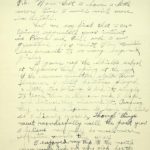 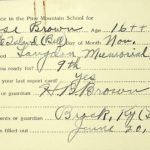 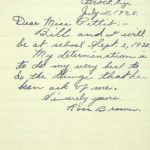 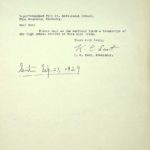