Mary Ellen Davies came to Line Fork Settlement as a teacher for the Coyle [Coil] Branch school close to the satellite settlement at Line Fork. She shared her teaching responsibilities with Miss Sommers who had been recruited to teach at Bar [Bear] Branch school, another one-room school near the settlement. Like many workers at Line Fork, she was charged to do many duties besides teaching. Line Fork in 1921 was still under construction and Miss Davies tells of the digging of a well, building fences, canning food, and other chores while working at the settlement. Her stay at Line Fork was very brief, from July of 1921 until September 1, 1921.

Miss Davies, who went by ‘Ellen,’ was a petite woman with a commanding presence and a strong singing voice. She was still teaching the year in I was in 4th grade although I did not have her. … [She] was a Welsh immigrant who grew up in southeastern Kentucky, attended Western Kentucky State Teachers College, and went from Line Fork to teach in the Harlan City Schools…where she taught in the elementary grades until her retirement in the mid-1950s. Her nephew, David L. Davies, [was] the founder of the Harlan Boys Choir. 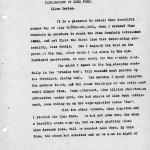 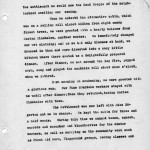 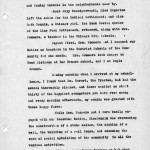 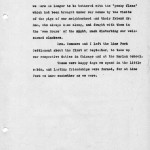 [page 1] It is a pleasure to recall that beautiful summer day of July thirteenth, 1921, when I crossed Pine Mountain on mule-back to reach the Pine Mountain Settlement School, and met the first time that interesting personality, Miss [Katherine] Pettit. How I enjoyed the talk on the porch at Big Log, after which I was shown to the old-fashioned guest-room, to make ready for the evening meal.

The night I spent at Big Log, sleeping restfully in the “trundle bed,” ’till wakened next morning by the five-thirty rising bell. The morning I spent enjoying the natural beauty and the grand buildings of the settlement until dinner time. Soon afterward, Miss Lillian Edgerton, an attractive Quaker girl, who had charge of Line Fork Settlement, came riding up on her high-spirited horse “Joe.”

With two other workers, Miss Edgerton and I started for Line Fork. We had not gone very far when a terrific storm came up, but we kept plodding along — like drowned rats, till we reached Line Fork. By this time, the storm had subsided and as we came in sight of [page 2] the settlement we could see the Good People of the neighborhood awaiting our coming.

When we entered the attractive cabin, which was on a rolling hill almost hidden from sight among forest trees, we were greeted with a hearty welcome from Marian Kincheloe, another worker. We immediately changed our wet clothing; and as we had only kimonos at hand, we dressed in them and were directed into a cozy little kitchen where there awaited us a delightfully prepared dinner. After dinner, we sat around the log fire, popped corn, sang and played the mandolin till about nine o’clock, when we retired.

Next morning on awakening, we were greeted with a glorious sun. Our Pine Mountain workers stayed with us until after dinner; then they returned, taking Marian Kincheloe with them.

The Settlement was now left with Miss Edgerton and me in charge. We kept the cabin for three and a half weeks. During this time we canned beans, squash, carrots and cucumber and blackberries for the winter workers, as well as carrying on the community work such as First Aid work, Playground groups. Sewing classes and [page 3] and Sunday Schools in the neighborhoods near by.

About July twenty-seventh, Miss Edgerton left the cabin for the Medical Settlement [at Big Laurel] ; and Miss Ruth Dennis, a Chicago girl, the Head Social worker of the Line Fork Settlement, returned, along with Mrs. [Cora D.] Sommers, a teacher in the Chicago City Schools.

August first, Mrs. Sommers and I assumed our duties as teachers in the District Schools of the Com­munity for one month. Mrs. Sommers took charge as Head Mistress at Bar [sic] [Bear] Branch school, and I at Coyle Branch.

Monday morning when I arrived at my school-house, I found that Mr. Cornett, the Trustee, had had the school thoroughly cleaned, and there awaited me about thirty of the happiest youngsters you have ever seen; and every morning afterwards, my coming was greeted with these happy faces.

While Mrs. Sommers and I were busily en­gaged with our teaching duties, Miss Dennis was overseeing the construction of a stone cellar, the sinking of a well, the building of a rail fence, and assuming the work of social up-building of the community in all the various activities.

It was a very happy feeling we had when we beheld the rail fence finished, and could hope that [page 4] we were no longer to be bothered with the “pesky fleas” which had been brought under our house by the visits of the pigs of our neighborhood and their friend Mr. Ram, who always came along, and fought with them in the wee hours of the night, much disturbing our well-earned slumbers.

Mrs. Sommers and I left the Line Fork Settlement about the first of September, to take up our respective duties in Chicago and at the Harlan School,

Those were happy days we spent in the little cabin, and lasting friendships were formed, for at Line Fork we knew each other as we were. 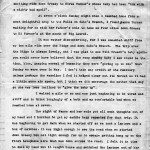 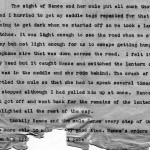 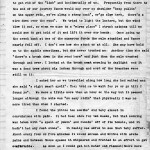 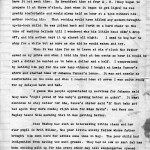 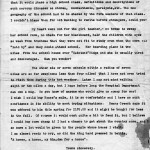