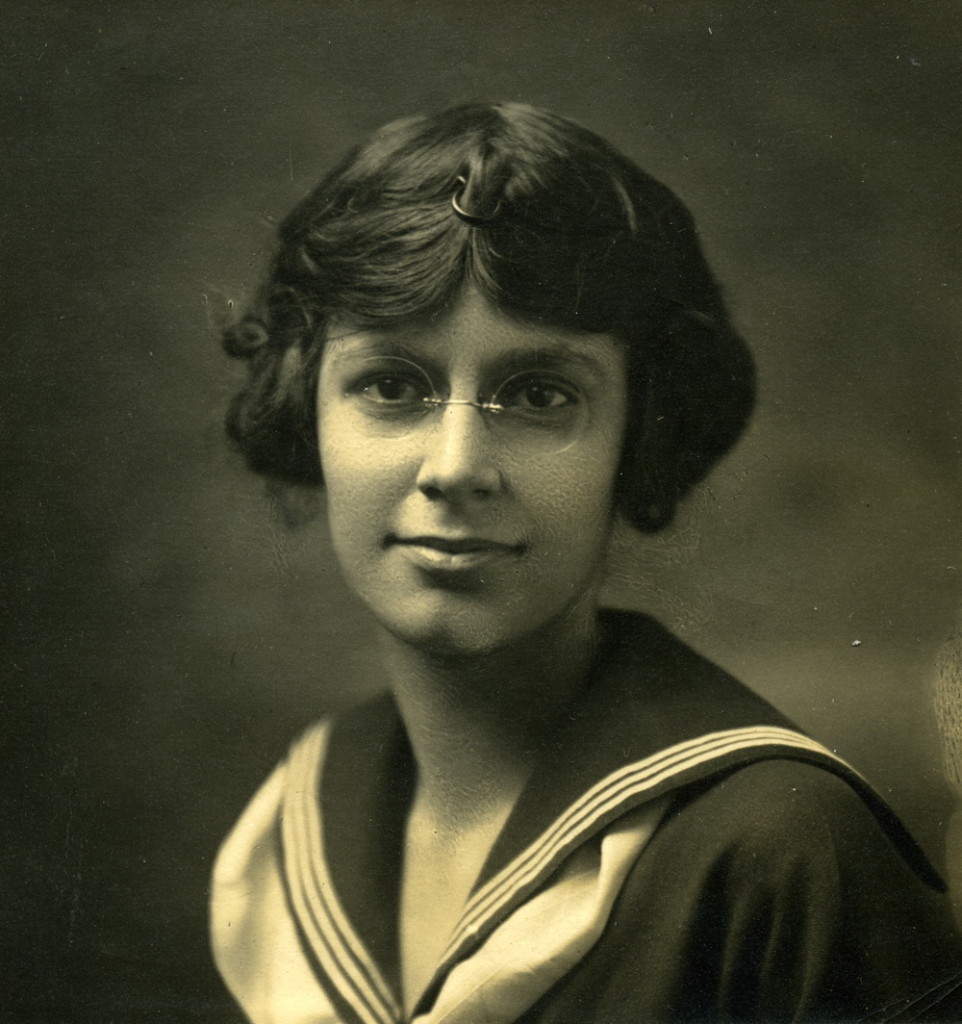 Isabel [Isabella] McLennan was a worker at the Line Fork Settlement, an extension of the Pine Mountain Settlement School, in the Summer of 1919. She worked with Martha Van Meter, a relative of PMSS director Katherine Pettit, who was also hired as a summer worker in 1919. Both women wrote excellent accounts of their stay at the extension settlement at Line Fork and turned those narratives over to Pine Mountain as part of the Line Fork Album.

The separate accounts are important as they describe life at the settlement through two different viewpoints and give an opportunity to compare the experiences of summer workers.

Isabel would have been twenty-four, by all accounts, when she came to Pine Mountain in 1919. One of her delights in working at the Pine Mountain Settlement School Extension at Line Fork was her chance to work with children and this joy rings throughout her later writings.

When Isabel came to Pine Mountain in 1919, the world was just recovering from WWI and a new mood was growing in the country. It was one that had a decidedly anti-radical and anti-alien, anti-Bolshevik sentiment. The government, as well as organizations such as American Legion Posts, were centers of invigorated patriotism. In Louisville, Kentucky, the city was just awakening to what they perceived to be a threat to the country in the form of immigrants. The Commander of Post #15 of the Louisville American Legion was charged to ferret out anarchists and draft-evaders and anyone who showed an unusual pro-German sentiment. The Commander of Louisville Post #15 was Samuel H. McMeekin.

Reconciling the settlement movement’s empathy with the immigrant populations and the work that many settlement houses in cities such as Boston, Chicago and New York were engaging, became increasingly complex. It is politically intriguing that rural settlements like Pine Mountain, far from the centers of Hoover’s “cleansing,” were caught up in a fervent patriotism. Immigrants, on close examination, played a subtle role in the life of rural settlements such as Pine Mountain.

The social and political radicalism often associated with the urban settlement movement seemed to have little impact on the workers who were engaged in actually conducting their efforts on health and literacy in the country’s Appalachian mountains. Many of those workers had ties to the northeastern elite women’s colleges or came with experience in WWI war efforts as Canteen or Red Cross workers. Their educations or their mission work often put them in close contact with immigrants or with foreign populations.

Though the roots of the rural settlement movement came out of the earlier radical and dissident milieu, by the first decade of the twentieth century, the radical dissident sector had quietly turned to practical and hands-on change methods. Unrest and agitation for rights in the form of protest was to follow in later years. Union organizing and dissent surrounding workers’ rights was centered on workers’ rights in the coalfields of eastern Kentucky and not on the poverty and health of subsistence farmer families. The “Coal Wars,” and agitation for worker’s rights, however, owes much to the early work of the strong women who educated so many in the eastern coalfields.

Unlike many of the short-term workers at the School, for whom very little information is found on their background or lives after they left Pine Mountain, Isabel McLennan has left a substantial paper trail. Through her writing, her extensive circle of friends, and her exuberance for life, we know quite a lot about her.

For example, she became a much-lauded writer and carried her experiences at Pine Mountain into her literature and foundational belief system. She had a long and prolific writing career as an author of fiction and non-fiction. She was also a playwright, a poet, a biographer, and a historian. Throughout her career she clearly reveals the profound effect of her short contact with Pine Mountain Settlement and her work with the satellite settlement at Line Fork.

After Isabel left Pine Mountain she married Samuel H. McMeekin, who was the Commander of American Legion Post #15 in Louisville. Commander McMeekin declared to the Louisville Courier Journal, that, “… the post would not tolerate anarchism,” and that “draft evaders and pro-Germanism will be uncovered by the American Legion in this city.” He also later served as a Racing Executive at Churchill Downs. The couple had many interests in common and likely many ideologies that did not sync. Yet, the greatest interests they held in common were service to the community and their three children: Isabel, Rosalind and Paxton.

Isabel kept in touch with the School in later years, as a small photograph album of unknown origin contains two photographs of Isabel and her first baby, also named Isabel. 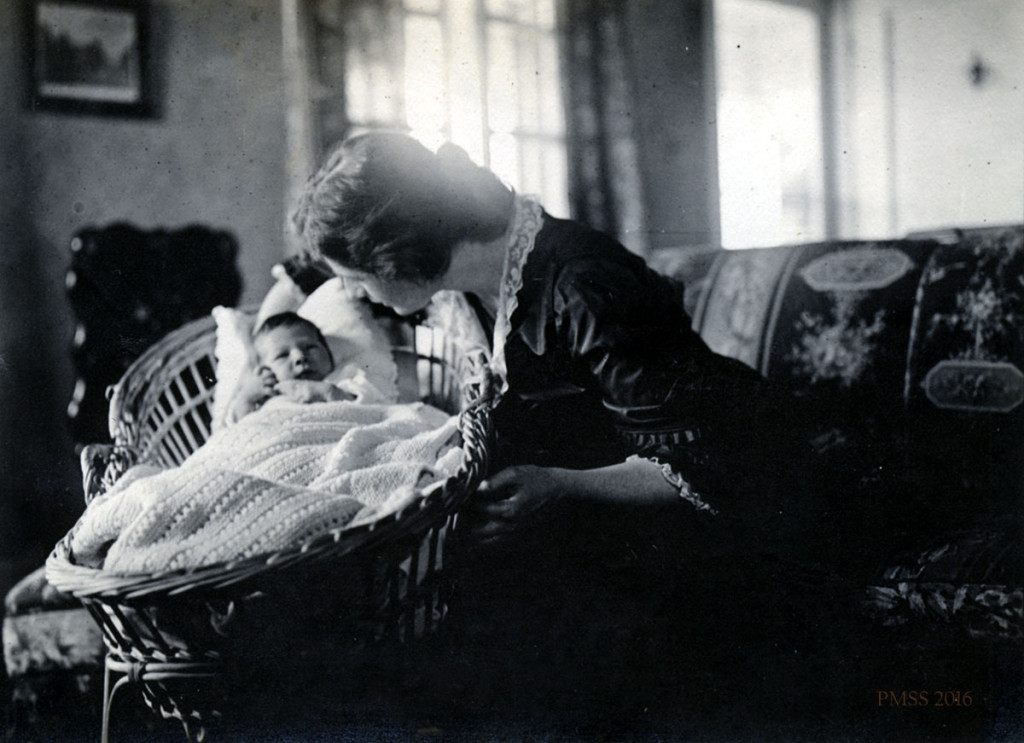 The other photograph in the album shows her husband, Samuel H. McMeekin, and the new 10(?) day old baby, Isabella born in 1921. 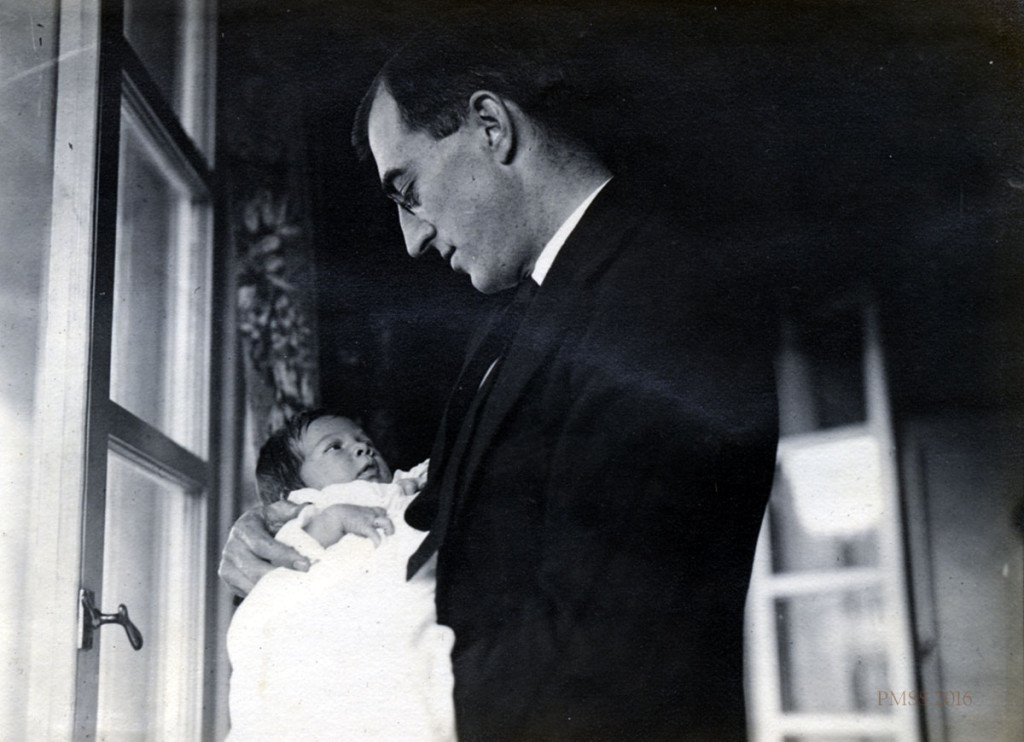 Another Pine Mountain connection and one that grew from her husband’s work with Churchill Downs was Isabel’s love of horses. While at the School she delighted in the horses and the rides on the medical staff “nags,” as the worker often called their horses. These horses were certainly not Bluegrass racehorses, but were workhorses and often mules, used to travel on horseback to the community homes and back and forth to Pine Mountain School some six miles from the main campus of  the settlement school.

Horses were an interest that Isabel never abandoned and many of her literary works, particularly those written for children, center on horses and ponies. Her interest in horses was strongly supported by her husband, Sam H. McMeekin, who was a racing executive at Churchill Downs. One of her horse-centered literary works, a piece of juvenile literature, was a very curious book that mixes fiction with non-fiction. It is a tale about the Kentucky race-horse, Aristides, winner of the first Kentucky Derby. Like many of her books, this is a moral tale meant to inspire adolescents.

Following her work at the School and her marriage, she started her literary career as a winner of several Junior League prizes for her contributions to poetry and plays. In 1942 she was awarded the Julia Ellsworth Ford Foundation award for her book Journey Cake, in which echoes of her Pine Mountain experiences shine forth. The novel Journey Cake was followed by another fictional work, Juba’s New Moon. Her novel Show Me a Land was made into a motion picture.

Her oeuvre was not just literature for the young. She wrote for all ages, young and old, and she produced a repertoire that spans plays, fiction, and non-fiction, poetry, and biography. As a poet and a biographer of note, who always maintained a deep interest in history, she left a body of work that chronicled the times in which she lived.

Surely it must have pleased Katherine Pettit that Isabel, like so many of the women staff at Pine Mountain, was a member of the National Society of the Colonial Dames of America. The ancestry of Isabel and her family in Kentucky goes back to the beginnings of the country. A great-great-grandfather was Jonathon Taylor who was commissioned an ensign by George Washington in the Revolutionary War.

One of Isabel’s most notable books was LOUISVILLE: The Gateway City, illustrated by Orville Carroll. It was distinguished by being included in the series, “Cities of America Biography.” This special limited edition copy was given to Pine Mountain by Alice Lloyd College to be added to the growing collection of McMeekin’s literary work held in the Pine Mountain Settlement School archive. 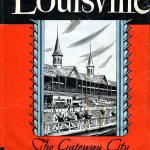 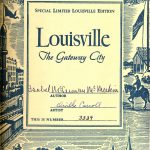 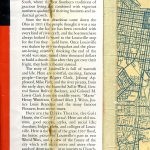 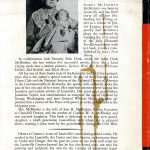 “Louisville, The Gateway City” by Isabel McMeekin. Text on back flap of jacket. [mcmeekin_isabel_m_002.jpg]

Regularly characterized by her fellow workers as a fun-loving team player and a collaborative spirit, Isabel carried her free spirit and sharing into her literary work. Many of her books are collaborations with other writers and are most often, uplifting stories aimed at our better nature. For example, her collaboration with Dorothy Park Clark, a writer born in Iowa in 1899, produced a large group of composite novels under the pseudonym of Clark McMeekin. She also wrote many books with other individuals. For example, she wrote Flowers to Grow and Gather with the well-known cookbook author Marion W. Flexner [King] in 1936 and went on to co-author many other works with the same author. She also wrote with the illustrator Nicholas Panesis in 1944 and with Marguerite Scott in 1950. A bibliography of her work is found in the table below.

Isabel was born with the name “Isabella” on November 19, 1895, in Louisville, Kentucky. Isabel was the daughter of Alexander and Rosa Harbison McLennan. She was educated at Westover School in Middlebury, Connecticut, and later at the University of Chicago.

Isabel McLennan McMeekin died in 1973 at the age of 78 in Louisville, Kentucky. A life well-lived.

SCRAPBOOK BEFORE 1929 Hortense Flexner
“Are You Too Old to Learn ?…” Moonlight Schools