GALLERY: STAPLETON REPORT 1928 – February “The greatest event of the month has been a new grand baby …” 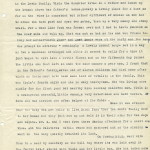 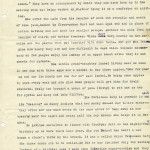 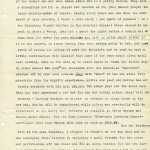 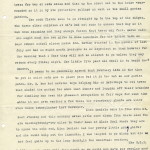 The greatest event of the month has been a new grand baby in the Lewis family. Viola the daughter lives in a rather new house up the branch above her father’s house. Surely a lovely place for a home as far as the view is concerned but rather difficult of access as one has to cross the barn yard and open two gates, then up a very muddy and steep trail. For a week Line Fork was frozen over and I had to leave Swallow on the near side and walk up. That was not so bad as the mud was frozen too.

Only her mother — Sarah Jane — and Aunt Susie were at the party and the baby was prompt in arriving — seemingly a lovely normal baby– but in a day or two a weakness developed and altho it seemed to rally for a time it just began to wilt like a little flower and on the fifteenth day joined the little one that left in much the same manner a year ago. I found that in the father’s family, seven out of eleven children had died soon after birth so there must have been some lack of vitality in the family. This was Viola’s fourth child and she is only twenty-one. The two living were sickly for the first year but healthy nice looking children now. Viola is a courageous, cheerful little woman, a very determined and hard worker. Before she was married she often helped at The Cabin.

When it was evident that the baby was not going to live, Sarah Jane took the whole family down to her house and they just sat up and held it in their arms for two days and nights. Mr. S. [Stapleton] and I went down there Sunday afternoon for a short service, all the relatives within reach had gathered and as the singing went on the baby quietly breathed its last.

On Monday, Mr. S. [Stapleton] went with them to a near-by cemetery on the hill top where it was laid away in the family lot. I stayed with Viola and her little boy. She had taken more pains than usual to prepare for her baby and it had had the best of care so it seemed the harder to see it go and not be able to help it. I just had to point out the reasons for its lack of vitality and suggested a remedy that might improve her own health.

Sarah Jane showed me the quilts that she and Viola had been making. One was on the frame and not yet finished.* They have an arrangement by which they can draw them up to the ceiling when not being worked on whether tying it as a comforter or quilting.

One cover was made from the remains of worn out overalls and coats of blue jean, backed by flour-pokes that had been dyed red and in place of cotton batting she had used the smaller scraps. Another was made from the remains of shirts and cotton dresses. Viola sews very neatly on the machine and the pieces were put together with some taste. But you can imagine how heavy they are and how difficult to wash which becomes necessary as few people enjoy the luxury of an upper sheet altho’ they do use sheets for spreads.

One little grand-daughter Isabel living near us came in one day with three eggs and a nickel to buy three apples. “One for Mam­my and one for Andy and one for me,” said Isabel. We bring some apples by post every week and are glad when people will get them for their children. Neely, too, brought a bunch of pine (fatty) to get one or two [apples] for Myrtle and Mary and baby Clifton.

The Christmas baby is growing up in spite of its “nussing,” as Nancy insists that her mammy “nussed” her babies whenever they cried and she must needs do the same altho it tugs away at her breast half the night and cries half the day unless she keeps it in her arms.

We invited ourselves to dinner with Grandpap Hall on his eighty-four[th] birthday as we were there last year. His son Bennet has built a new house a stone’s throw up the branch. It has a cellar which few houses have. The three rooms are to be ceiled [provided with ceilings]. So far he has finished only the ceiling. Instead of a birthday cake I made some Valentine sugar-cookies and they were so good Grandpap and Bennet “‘lowed they must have come from the store.” I felt quite complimented as I do not make cookies very often.

Finding two heart-shaped cookie cutters among the kitchen furnishings I was tempted to make some for the school children at Bear Branch and there was enough for the birthday-man also. The smaller was placed on top of the larger one and when baked stood out in a pretty relief. They have a phonograph and Mr. S. played our records on it. Then Bennet played the least objectionable of theirs. Nearly every house has one with the noi­siest of jazz records. I found a good story — “The Spark of Manhood” — in the Christian Herald written in the mountain dialect which seemed to ap­peal to Bennet & Lorry. They had a guest the night before — a cousin who came much the worse for corn whiskey and with an extra quart bottle of it in his pocket. He drank freely from that before going to bed. But instead of making him sleepy it made him talkative and he kept up such a lively conversation with himself that none of the rest could sleep until near morning. When he did wake up to drink again he found the bottle emp­ty since Bennet had poured the remainder into the Branch. So “Harrison” started off to find some more. So they were “shet” of him but still felt miserable from the night’s experience. Little six year old Melvin was en­tirely occupied with his B.B. gun, his two hound pups and the black cat. They had just purchased a cot bed for him but having always slept with his parents — lacking brother or sister– he refuses to sleep alone in his new bed. But he will be transferred while asleep and eventually will be accustomed to it. Lorry tho’ deformed is skillful in tying brooms and Bennet makes stools for the Pine Mountain “Fireside Industry Department”. Last year they reckon they made as much as $200.00.

His two brothers work at the same business. I stopped at Frank’s on the way back and he was enlarging their kitchen by enclosing a small veranda for the stove and partitioning off the other end for an extra bedroom for the two largest boys fourteen and sixteen. It happened the next day I had to go and see Hiram’s baby, Lettie, — sick with bronchitis. When I go over that ridge I am always wondering how the first settlers ever chanced to make a home there. Still there is not even a wooden sled road but Hi and some friends were working on this trail where it had washed out. I had to look out carefully in places where the path was so close to the trees, for one is apt to get jambed against them. It is always interesting to ride under the trees for two or more miles and then up the creek bed to the house — surrounded as it is by its protective palings as well as the small garden patches.

The corn fields seem to go straight up to the top of the ridges. The three older children at Hi’s had not gone to school that day as it had been storming and they always feared that trees may fall. Sarah said she might send the two girls to Pine Mountain for the Spring term as Bear Branch school closes March 2nd, having started in the middle of last July and had an eight month year. She is so dependent on them however for the washing that I fear they will not be allowed to go unless they may return every Friday night. The little five year old Cecil is to begin next Summer.

It seems to be generally agreed that February 14th is the time to put in onion sets and to plant peas but it is too wet in our garden patch. Mr. S. has had several boys helping him on Saturdays to cut trees that shaded the garden too much last Summer and lopping off their branches for kindling has been his pleasant occupation on fair days for some time. Altho’ it was zero weather a few times, the strawberry plants are alive, even those transplanted last November.

Miss Daniels came in from Pine Mt. last evening and this morning seven girls came along from there also who are walking twenty-two miles to their home at Elsie Coal where they are to spend the week end. Miss Daniels had her pretty little pony, Alifer, and she would help out the laggards. I was tempted to go along but did not feel quite up to the long jaunt in the uncertain weather.

The W.C.T.U.(?) were not quite well this month so we could not have our regular meeting but I visited them and we mean to continue. The brother who is addicted to drink was there the last time and was quite sober and agreeable.