WOODBOO 1957 BOOKLET BY ANGELA MELVILLE displays images of a booklet written by Angela Melville for her nieces and nephews. The booklet describes the seat of the family at the Woodboo plantation in St. John’s Parish, Berkeley County, South Carolina. The plantation was destroyed when the Santee Cooper Dam was created.

The plantation had been in the family since the original George II land grant nearly 300 years ago. On the back cover of the booklet she wrote

This is my new house. Emily uses the old one on the other side. I wrote this for the children. [signed]

Angela Melville describes her ancestral trail in this small booklet. From the Argyle clan in Scotland, Angela Melville’s family span a long history and were centered in Charleston, SC.

Melville describes an ancestor who came from the plantation, “Woodboo,” Margaret Philip, who married Archibald Campbell, a Scot who was stationed at Charleston. Their tempestuous romance is at the heart of William Gilmore Simms’ novel Catherine Walton, written in 1851.

Tales of “Mad” Archie, a member of the Argyle Clan of Scotland, abound. Campbell was killed at the Battle of Videau’s Bridge. His wife Margaret had but one child, also called ‘Margaret.” The granddaughter married a Heyward, the ancestor of Angela Melville. Uncle William Creech is distantly related to this line of the Campbell family and the Campbells of southeastern Kentucky.

On January 8, 1759, Margaret Philp was born to Robert and Mary Philp. In December 1780 she married Lieut. Archibald (Mad Archie) Campbell of the 71st British Regiment. “He was killed in the Battle of Videau’s Bridge in St. Thomas and St. Dennis Parish. His wife died a few days later, leaving an infant, Margaret Philp Campbell, who was brought up by her great grandmother, Mrs. Robert Williams ….”

“This is my new house. Emily uses the old one on the other side. I wrote this for the children. [signature]” 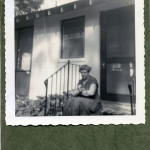 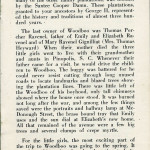 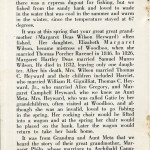 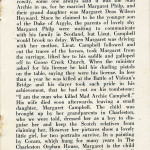 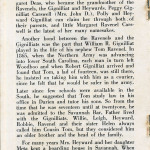 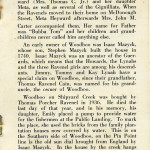 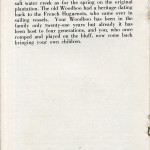 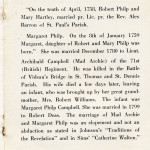 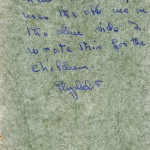