The creation of the Pine Mountain range is unusual. It is a unique, near 100-mile-long formation created by the geologic action of a thrust fault. A thrust fault occurs when one section of the earth’s crust is pushed up against another and the force of the action fractures the crust and sends one section up and over another. The Pine Mountain range was created during the late Paleozoic era some 250,000 years ago when the continent of North America slowly collided with Africa and Europe and the crust tilted upward as it moved over the North American plate in a northwesterly direction.

The thrust fault which created the Pine Mountain range is largely sedimentary and limestone rock many thousands of feet thick. It is sprinkled with limestone caves and sink-holes. Sawmill Hollow Cave, just above the School, is one of the more interesting of the many limestone caves along the mountain range.

In the 1960s the cave was mapped by Peter Rogers, son of Burton Rogers, Director of Pine Mountain Settlement School. Accompanied by Philip Hayes and others, Peter, was the first to take a scientific interest in the cave. At the time of his exploration, a map was made of the cave and its chambers as far as it was humanly possible to negotiate the narrow passages in the small cave. A diagram of the cave was made by Peter Rogers. Other spelunkers following Peter’s initial efforts have also described and measured the cave passages. The map prepared by Peter Rogers follows: 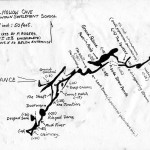 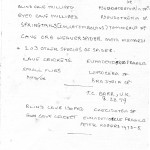 The cave is the habitat for many unique species. One, a beetle, is of particular interest to biologists. The Pseudarophthalmus, a genus of the Coleoptera: Carabidae in the Appalachian valley area around Pine Mountain, has been described by University of Kentucky biology faculty, Dr. Thomas C. Barr, Jr. in his paper entitled “Pseudarophthalmus from Appalachian Caves (Coleoptera : Carabidae: The Engelhardt Complex” (see below).

The Pseudarophthalmus is but one of the unusual insects that have found a home in the caves along the Pine Mountain and that have been identified by Dr. Barr and others, including Peter Rogers. See Peter’s list, above.

Geologic Quadrangle Maps in Kentucky show the leading edge of the thrust fault in cross-section and can be used to illustrate movement on the fault. Contact a public library or the Publication Sales Office of the Kentucky Geological Survey.