Dear Friend Letters 1932 consists of one 3-page letter that includes the following subjects:

Letterhead lists names of board president, director, treasurer ; school receives constant appeals from young people for an education by working their way through ; examples of Pine Mountain awakening the consciousness of societal ideals ; tried to do without a doctor this year but had to hire one ; new doctor is young hard-working man paid partly by community ; school must raise the balance of doctor’s salary ; need new laundry equipment ; reservoir repair was costly ; revenues decreased 38% in last two years ; this year there were 5 times as many applications as could be considered ; request for help ; signed by Glyn A. Morris, Director ; 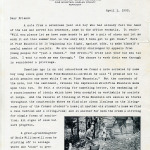 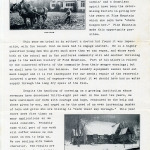 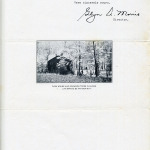 PRESIDENT OF BOARD OF TRUSTEES

A note from a seventeen year old boy who had already felt the hand of the law and served his sentence, came to the office recently. It read — “Will you please let me have some money to get me a pair of shoes and let me work it out this summer that is the only way I have got to get them.” Here at Pine Mountain he is beginning his fight, against odds, to make himself a useful member of society. We are constantly challenged by appeals from young people for “just a chance.” One wrote — “I tried last year but was too late. I want to work my way through.” The chance to work their way through is considered a privilege.

Sometime ago in an old schoolbook we found a note scrawled by some boy long since gone from Pine Mountain — on which he said “I promise not to pitch pennies any more while I am at Pine Mountain.” Not the contents of the note, but the sentiment, reveals the impression which Pine Mountain made upon this boy. He felt a striving for something better, the awakening of a consciousness of ideals which have been accepted as worthwhile by society at large. And the results of training at Pine Mountain are seen as we travel throughout the countryside where we find nice clean linoleum on the living-room floor of the former student’s home; at another old student’s home we find a real bedroom and a living-room; and at another far down the creek a striving for simple forms of sanitation. All signs of slow but sure progress.

A great-granddaughter of Uncle William will soon be starting off to college where she “aims” to prepare herself to teach. Arduous toil in the fields raising potatoes year after year…

…has been her method of meeting her financial obligations. A genuine zest for larnin’ and a dauntless spirit have been the determining factors in giving her the years at Pine Mountain which she says have “shore holped her.” Pine Mountain made this opportunity possible.

This year we tried to do without a doctor but found it was impossible, with the result that we have had to engage another. He is a highly qualified young man who gives much more than we can repay, and whose work both at the school and in the scattered community will add another thrilling page to the medical history of Pine Mountain. Part of his salary is raised by the concerted efforts of the community from their meagre earnings; but we shall have to raise the balance. Our laundry equipment cannot hold out much longer and it is far inadequate for our needs; repair of the reservoir incurred a great deal of expense — but without it we should have had no water supply through the long dry spell of the fall.

[Photograph captions: “Our Team” and “The Chapel ‘If Winter Comes…'”.]

Despite the handicap of carrying on a growing institution whose revenues have decreased thirty-eight per cent in the last two years, we have continued our work with courage and hope, reassured by the help and cheer given by you, and urged on by the need of an ever increasing number of boys and girls who are willing to “work their way through.” This year there were five times as many applications as we could consider. Probably some vital part of our work will suffer unless we can count on you to help us. We are dealing with human character. The results are worthwhile and cost little proportionately. Your gift, no matter how small, will…

…help some worthy boys and girls to fit themselves into the life about them. Won’t you help us again?

[Photograph caption: “Farm House and Dogwood Trees in Bloom ‘…Can Spring Be Far Behind?'”]

Back to DEAR FRIEND LETTERS – INDEX