Hattie Fay Sturgill, one of three children in the Riley Sturgill family to attend Pine Mountain Settlement School, appears to have been more active in the School’s activities than were her siblings, James and Margie.

Examples of her extra-curricular pursuits are recorded in various documents in the PMSS Archives. According to The Conifer 1941, page 17, Hattie wrote a scene for the Co-op play, “Cooperation Around the World,” which was reprinted in The Conifer with the title, “Kagawa in the Slums.”

During the years Hattie was a student, she worked with Grace Rood at the School Infirmary, according to the listing of Boarding School Students.

A script of the Community Group Assembly on May 20, 1942, casts Hattie as “Master of Ceremonies,” introducing each of seven students who described the work of the Community Group and the Co-op program at Pine Mountain. Their narratives were to accompany a film made by Ray and Virginia Garner, who were contracted through the Harmon Foundation to film the unique educational program activities at the School. One of the participants, Flora Mae Ford, a school visitor, described a project assisted by Hattie:

At one of the schools, the children were thrilled at doing some real acting in front of a movie camera. Very willingly did they go over and over singing games — with Hattie leading — and Mr. [Ray] Garner grinding away at the camera crank.

The program for the  Class of 1942 Commencement lists Hattie as one of the students who participated in the ceremony.

Hattie graduated from Pine Mountain Settlement School in 1943, but the School lost track of her after she left.

As with all of the Student Application Blanks that were submitted to Pine Mountain Settlement School and stored in the School’s archives, the Sturgill siblings’ applications contain a wealth of information about who they were and how they lived.

The family lived at Delphia, Kentucky, in Perry County where her father, Riley Sturgill, (born c. 1891), worked on a rented farm of 400 acres as well as on building roads and at a lumber yard. Her mother, Nora (Baker) Sturgill (born in 1906), kept house. The main crops on the farm were corn, potatoes and beans. They had “5 head of stock.” The family lived in a 4-room log house that was heated by “grates” and lighted by kerosene. They got their water from a well.

Editors of the PMSS Collections have greatly appreciated the helpful information and support that Randall Moon, Hattie Fay Sturgill’s son, has provided during the production of the Sturgill Family pages.

In this case, he has identified the Collection’s photo of a nurse in uniform as his mother. He writes the following in an email dated May 10, 2017:

My mother, Hattie Faye Sturgill as she was known then, but Maxilyn for the rest of her life, had just graduated from an LVN [licensed vocational nurse] program in California, about 1958 or 1960 when she was Maxilyn Moon. She may have sent PMSS the picture as part of her correspondence with the school in requesting transcripts. 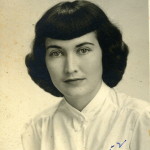 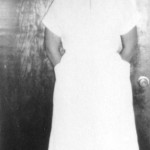 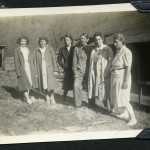