MAY GRAVEYARD MEETING AT BIG LAUREL, 1934

By the time we reached the graveyard the crowd was already assembling. The graveyard is next to the settlement [Medical Settlement], on a hillside overlooking the creeks and directly across from a bare mountain wall, almost straight up and down and not relieved by so much as one gap or “holler.” A discouraged small cornfield had withered away up there. 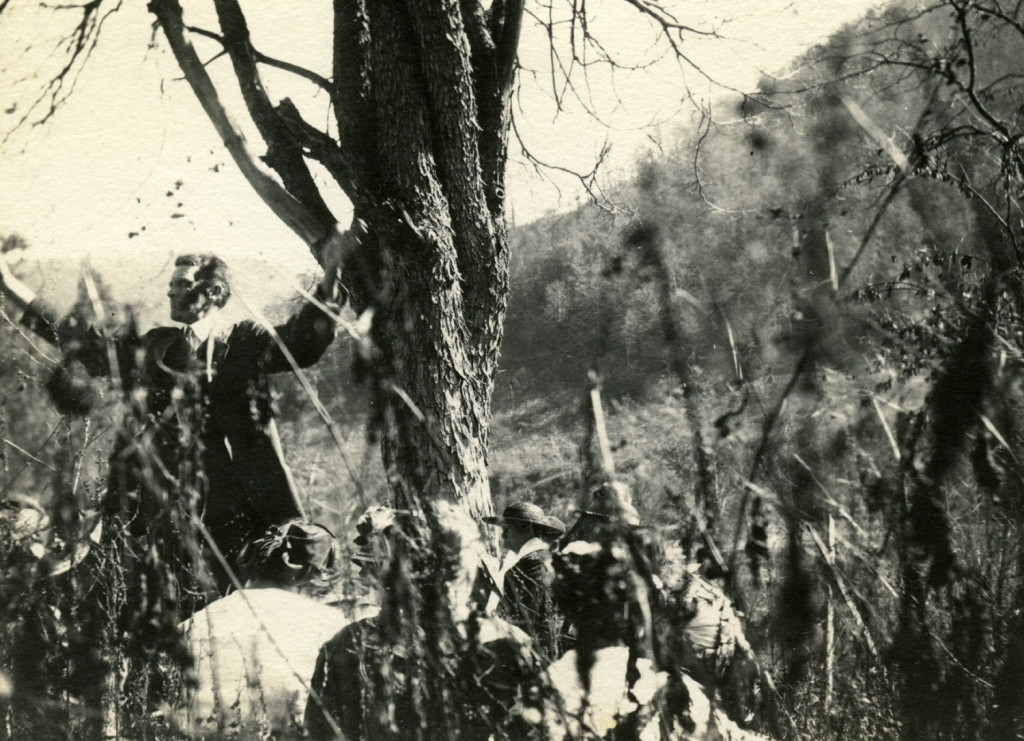 I have never seen quite so large a gathering at a meeting, or one quite so well dressed. They tell me the decoration meeting is as big a day as Easter, and one they all try to get new clothes for. Some brought pink roses, real ones, but most of the graves were spiked with stiff paper flowers in gaudy colors — yellow, red, brilliant blue. One, the recipient of much admiring comment, had flower arches at either end, over a foot high. The whole place had rather a carnival air. We sat all over the place, on the grass.

Louis Turner was carried eight miles on a stretcher to hear the meeting. They covered his bed with a pink quilt and put it just in front of the pulpit, which was a small table covered with newspaper, and holding a bucket of water, an aluminum pitcher, and a glass filled with roses.

They sang for a long time to get started. It seemed there were several well-known singers, and each one had to take his turn at choosing the hymn and leading the singing. I didn’t take down the words to the songs. They weren’t very good ones, seemed to me and I doubt very much if they were the real old-time mountain hymns. There was not much enthusiasm. Although a few people did begin speaking in tongues during the prayer, it was not very enthusiastic.

The first preacher was a young man, Jesse Fields, from over Incline way, a good looking chap with curly black hair and a very nice smile. He promised not to “preach” since there were so many other preachers there, but he talked for about an hour anyway. Among other things, he spoke of what seems to be a general idea here. After the end of the world the good will be called forth from the graves to join the Lord, and the evil will be left lying there, and at the end of a thousand years the evil will also be called forth (the second resurrection [Second Coming]) and judgement day will be, in which each man will confess every sin and be placed where he belongs. There was something else about a three and one-half year millennium but I didn’t get that straight.

Fields gave pace to another preacher, a scared looking man who said a few words in a low mumble and then sat down in confusion. Then came Mr. Callayan [Callahan?] our local preacher, who opened with a real mountain nasal twang song, sung with zest. “I love the Bible, the Good old Bible,” etc. He is a tiny little man,

with black hair hanging in a sort of bob length behind and thin at the front except for a cowlick in the middle, about halfway back, and he wears great shell rim spectacles which give his face an owlish look. I can’t include the hammering on the table, the dramatic undertones — ahs — hums — etc., but have taken down some of the words as follows, roughly:

“We’re a-going to face the judgment, cain’t wear pretty clothes, cain’t wear a windin’ sheet even. Got to walk up there stark naked. Do you know that, Hamp? D’ye know it, Floyd? My Lord! What do you know about that! Stark naked!

“The devil’s always tempting us. He’s a tangler, he is — My Lord! But we cain’t get tangled, can we, Floyd? Hit’s awful hard for me to preach — me a little puny fellow like I am. If I let the devil tell me what to do I never would get invited out to dinner.

“You cain’t shell corn till you shuck it. You cain’t find the Lord’s lovin’ kindness when you’re a durn liar.

“if we don’t believe the word of God we ‘ll be damned. My Lord, that’s awful, ain’t it?

“We got to repent. Here’s Louis, he’s a murderer. I say ‘Louis, old boy, you gotta come out and repent. Want to git ready for the meetin’ in the air. Everyone has to raise up from here, and go to the judgment. I got to tell the Lord in front of everybody just what I done.’ I got to say ‘Lord, I’m a murderer, Lord, I stole, Lord, I’m a whore monger.’

“Some night about twelve o’clock Jesus will be comin’ in his airplane. Get your ticket for this airplane ride. Say ‘Farewell, world, I’m gone on.’

“Cain’t shirk. Jere’s a lazy man, here’s a sorry man, we’ve got to get to work. The word of God’s sharp, and it’ll git the man that don’t preach it right.

“if you got any flowers to put on this poor little puny feller’s body just put ’em on me now … I want to be buried with just children around. Take a sheet and wind me up and put me away. I want room so when they say ‘Come up, brother,’ Come on up’ I can sit out easy.

“The prophet used to go to dances and flung about so the people thought they was drunk.

“Come on, big boy, come on, little feller. I ain’t got a thing agin anyone of you but I got the word of God to preach to ye.

“Ever see a fish git hitself tangled in a net? Hit cut an awful shine but then it give up.

“The eunoch [sic] was standin’ in the church readin’ the Bible, and old Paul was standin’ there — just like I was the eunoch and this brother here was Paul, and Paul says to him, ‘Do you understand what you’re readin’ there?’ If a man gits out to preach and don’t understand, it don’t benefit nobody, does it? That eunoch might be a great man but he couldn’t understand the word of God, could he?

“They’s some men just ahead of us that knows a lot but don’t know no more about the Bible than we do, do they? Praise God if he’d a know’d all about the Bible he wouldn’t a had to git somebody else to read it.”

“I’m goin’ to tell you something, praise God. I understand every word he preached because I’d read the Bible. I heard a man preach the other day with a education. And when he got through I said to everybody around, ‘Did you understand what he said?’ and they had to say they didn’t. Brothers, I got enough knowledge of the Bible myself, I couldn’t understand him because he put it in high language. What good did it do?

“Education and salvation is the two best things that was ever put together but some preachers preaches till they unlearns people that has already got learning.

“Peter got the keys to the kingdom. Praise God. Brother, if you are agreed I want to ax you a question. What did John do when they come down to the river to be baptized? He baptized some folks and some he didn’t. Brother, I have to see the fruits. I’m that much like old John. I don’t baptize them without seein’ the fruits. I’m one of John’s kind, praise God.

“There was divers that disputed there. Have we got any divers here?

“The parents let the children go. So go here, boys, go there! That’s what’s wrong with the world today.

Prayer: “Lord help me. Hit’s a gittin late in the evenin’. I got to git home. Met a young feller. He said ‘Howdy, what’s your name? I’ll take your mare across and you foller atter.’

“You goin’ to go up stark naked to confess your sins. On the right hand comes a great host dressed in white gowns. There’s the great Holy Ghost up there a-standin! How will I know him from any other? He’s the man that’s got bleedin’ hands.

“There’ll be the righteous walkin’ around on top watchin’ you burn and scorch below, and the smoke comin’ up black. Or if you’re righteous you’ll walk around on the balcony and look down and see father burnin’ and mother burnin’, My! My! Gnashin’ their teeth — My Lord, what about that! When the moon turns to blood look here boys, there’s the son o’ man a-comin’.”

We left at this point and returned after the meeting was over, but not too late to see them bring paralyzed Louis. Six men heaved the bed to their shoulders, his wife walked behind lugging the pink comforter, and Louis holding the poppy upright and the smoking pipe in the other, started off on his eight-mile ride home.