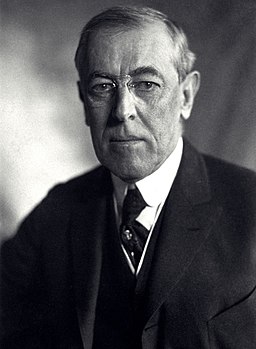 U.S. President Woodrow Wilson, 1919. From the Harris & Ewing collection at the Library of Congress. Public domain, via Wikimedia Commons.

U.S. President Woodrow Wilson joined Dr. William Frost, President of Berea College, on the podium at the College where he delivered the following talk. The focus of the talk was that “…every university man should be interested in Berea.” He spoke of the massive and rapacious wave of industrialism that was coming to Appalachia and he encouraged Frost, as the President of Berea, to prepare students to meet the challenges of rapid industrialism.

It is a cause of real personal gratification to me to have the privilege of standing upon this platform this evening with Dr. Frost and identifying myself with the interesting and noble cause which he represents. It is a very significant fact that the people of the mountain regions of the South for whom Dr. Frost is working, and for whose benefit Berea College has made such important adaptations, are the inhabitants of what is really the only frontier we have left in this country. The Census of 1890 informs us that it is no longer possible to trace that waving line between us and the far coasts of the Pacific which once marked the front of our advance from sea to sea. We have reached the Pacific and established our population with no considerable breaks that can be marked upon the map in the line of settlements that extends from ocean to ocean. And now we turn from this hurried work of advancing settlement, to observe the places we have skipped in the march and to do thoroughly what in our haste we had done but imperfectly or altogether overlooked; and it is in this turning about that we observe the frontier we have left within, at the heart of the older East, where the Appalachians spread their spurs from Pennsylvania to Georgia.

I have said that the gratification I feel this evening is a personal gratification, because in speaking for these people of the mountains I am speaking for the people of my own section of the country, I mean the South; and because there lies upon this subject for me the full light of many of the thoughts that spring out of my habitual studies. No one who observes the life of the nation now can fail to see the turning point which we have passed and the new character which our life has taken on. Hitherto in our breathless advance and conquest of the continent, our eager cry has always been, How far? We have pressed forward, forward, eager to complete upon its great scale that great work of settlement and of the establishment of states that has ever drawn us onward. We have sometimes been laughed at by foreigners for boasting of the size of our continent as if we ourselves had made it; but the boast is not after all ridiculous, for by the size of the continent we are to measure our achievement in taking possession of it.

It lay once pathless and with impenetrable forests massed thick upon it, the open plains far beyond, and unknown until we reached them, — themselves hard to till and difficult to subdue to the uses of men; and beyond them the great barrier of the Rockies with other forests 10 penetrate and another sea slope to make our own; and all this we have understood how to possess and how to use for the building of stable states and the expansion of a great common government, single and inseparable in spirit and in achievement. But now that this initial task is finished, we turn about and scrutinize more closely and critically the work we have done, see where it has been slipshod, imperfect, incomplete. The cry is no longer, How far? but, How well? The task is no longer one of achievement. It has become, rather, the sober study of conduct, of the detail of life, of mutual responsibilities, of purification, of readjustment.

And it is with this duty in mind, and with this new standard of effort that we turn to look upon our first forgotten frontier in the inner mountains that lie upon our eastern seaboard, a place hitherto only touched and forgotten, and holding still such people as those with whom the work began. No one who has ridden as I have, through the silent lengths of that great region can fail to have his imagination touched by what he has seen — the almost limitless forests lying there untouched upon the long slopes of the towering hills as if they had been there keeping their counsel and holding their secrets ever since the creation; and here and there in the little clearings the houses of a secluded people, as reticent as the hills about them, slow to speak, their eye watchful, holding back the secrets of their quiet life. It moves one to know how like these people are, in all but the absence of restless movement and of aggressive energy to the first settlers in these hills who were our own precursors in the establishment of civilization on the continent. And it is surely not to be wondered at that those of us who have known the better things that they have never had news of, should feel the impulse of duty to return to them. We should go to them as heralds of the change, the invasion, the transformation that is to come upon their hills, — the coming of the saw-mill and the road and the mine, and then the railway and the last invasion of the forces of the modern time. But we should go amongst them not to master them and to take what they have so long possessed, but to teach them self-mastery and the use of what they have so that it shall be indeed their own because they know its value and the uses they may make of it. In offering them the education which shall teach them these things Berea surely does not differ from other colleges, nor even from the great universities of the country in the essential features of her task. Berea’s unique features are simply adaptations to unique conditions. No college nor even university amongst us is yet a place whose chief and the only function is research, the origination, and discovery of truth. Every place of education amongst our free people is still a place of schooling, where passion may be cooled, prejudice enlightened, effort steadied, purpose given vision; where the chief product shall be, not men of the closet, but chastened men of action, men schooled and fitted to carry forward the better tasks and make prevalent the established lessons of the nation’s life; men who can understand and lead and serve and interpret. And so, each in its rank, American colleges share with Berea this sacred function of enlightenment, and there ought to be universal comradeship with her. Every university man should call cheer to her and lend her aid as he can in the work which she has undertaken.