NOTE: Images and transcription of this letter may also be viewed on “Dear Friend Letters 1918“. 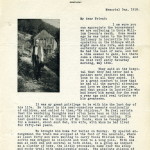 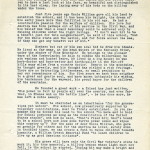 I am sure you can appreciate the bereavement we are suffering in Uncle William Creech‘s death. Some weeks ago he was taken to the Norton Infirmary in Louisville for an operation on the kidneys which might save his life, and would certainly spare him much pain. He had the best of care, and for a time seemed to gain, but there came a change for the worse, and he died very early Saturday morning, May 18th.

They said at the hospital that they had never had a patient more obedient and anxious to do all they asked. It is a great comfort to know that he had all the careful attention and love we desire for our own, and that people in Louisville who had heard him speak for the road a year ago paid real tribute to his greatness.

It was my great privilege to be with him the last day of his life. He talked in his semi-conscious moments continually of children, and called to them, — “My children.” We feel certain that his wandering thoughts must have been on this school and his little children for whom he had heart and craving. His last question was to inquire of Mr. Zande, whom he recognized for a moment, about Aunt Sal, his wife, with whom he had lived for fifty-two years.

We brought him home for burial on Sunday. By special arrangement the train was stopped at the foot of the mountain, where at least forty men were waiting to carry Uncle William home. The coffin was wrapped in oilcloth and tied to a long pole. With one man at each end and several on both sides, in a group as compact as a cluster of bees, the little procession came over the steep and rocky trail with unbelievable speed. The absolute silence of it all was the most telling witness to the grief everyone felt.

Try to imagine the solemn simplicity and appeal of his burial, the grave dug by friends, lined with cemented rock, to make a secure resting place for a great man; children and neighbors…

…singing old, old hymns, — “Been a long time traveling here below”, Aunt Sal sending around word that she wanted all his little children to have a last look at his face, so beautiful and distinguished in its last sleep; the laying away of his body on the hilltop under the trees.

Just five years ago Uncle William gave all his land to establish the school, and it has been his delight, the dream of his early years more than fulfilled in his old age. He had a constructive passion for the welfare of children. His love for America was born perhaps out of his service in the Civil War, and his belief was that a sound democracy could be achieved only by raising children under the right rulings. “I don’t want hit to be a benefit just for this neighborhood,” he said of this school, but for the whole state and the nation, and for folk acrost the sea, if they can get any benefit out of hit.”

Nowhere but out of his own soul did he draw his ideals. He lived so far away, at the head waters of the Kentucky River, under the shadow of Pine Mountain! He belongs to the pioneer days of the Cumberlands; he holp (sic) to subdue the wilderness; he ate venison and hunted bears, he lived in a log-house; he was herb-doctor and bone-setter and tooth-puller in the far-off hills many miles from a country doctor. Remote in the mountains, he thought greatly, and his thought has yielded a rich fruitage. There are no detracting littleness, no small prejudices to mar our remembrance of him. For five years we have been neighbor to a great and gentle soul, and have known intimately his wisdom, his tenderness for the wayward, his proud hopes for the children of the mountains.

He founded a great work — a friend has just written, “His power is felt by people all over the country, and even farther, in France, and on the battle line,” — he has done more, he has left a noble memory.

It must be cherished as an inheritance “for the generations yet unborn.” His school, now precariously supported by voluntary contributions, must be firmly established. Do you remember how he deeded his land to the school “to have and to hold for School purposes as long as the Constitution of the United States stands,” and how he said “That’s fixed hit; thar’s bound to be a school here now less some furrin power comes and wipes this country up”? For the sake of dear Uncle William, who gave so greatly for others and for the America he loved, surely even in troubled times, we can create a fund to raise children towards humanity, a William Creech Memorial Fund “to learn children to live up as good American citizens.”

His grave will have only the Civil War Veteran’s stone to mark it; his true memorial, a hilltop beacon whose light must not fail, is the school he started, “Hoping hit may make a bright and intelligent people after I’m dead and gone.”